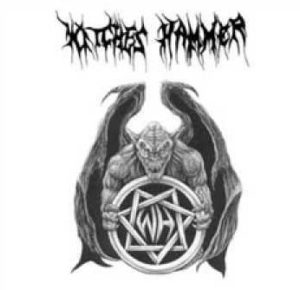 This summer at Covenant Festival IV in Vancouver BC all hell will break loose. BLASPHEMY, INCANTATION, PROFANATICA, and the like all on the same stage will usher in one of the darkest, most savage events in recent Canadian history.

However, another dimension exists to this gathering that is even more profound. The ancient speed metal gods WITCHES HAMMER will return to the stage for the first time in 29 years. Many know of the band as a pre-cursor to several Ross Bay Cult bands, mainly through re-releases and nostalgic forum posts, but lack a deeper appreciation for the absolute true spirit of uncompromising metal they possessed.

Original guitarist Marco Banco (TYRANTS BLOOD, ex-BLASPHEMY) takes us back to the wild west and reveals a time when the genesis of something exciting was just starting to take off. Listen up and take a history lesson from one of your betters. Soon the next generation will know!

COVENANT: Alright! So we know who you are, most people reading this at least have an idea, and anyone in this city is aware of your impressive resume, but now we’re here to talk about WITCHES HAMMER!

We know that a gang of Delta miscreants started the first speed metal band in Western Canada, but for the uninitiated can you provided a quick blow-by-blow, highlight-reel of the band’s brief history?

MB: Alright. So, a brief history:

There wasn’t a lot of like minded kids into heavy music back in the front early 80’s.

For instance, in my junior high, the kids that were into Judas Priest, Sabbath, KISS, Blue Oyster Cult, Rush, Saxon, Maiden etc. weren’t down with Motörhead the Sex Pistols, Plasmatics, Cirith Ungol and groups like that. So we started to drift into a micro scene that was our own.

We still all had no out, but the 3 or 4 of us that wanted our own thing started seeking out the strange bands whose albums were being sold in the back of Kerrang, Enfer, and zines like that. Started making our way into the city to the import shops just find something unique, heavier, faster.

That’s how what ended up being the metal scene we all hang in today started.

Just young preteen punks and headbangers looking to carve out our own piece of turf.

When I started playing the stupid guitar, of course I sought out the few and far between to make noise with. It was cool having something not too many people were into. In fact, they hated it. So you know your headed the right way. Steal their Led Zeppelin and Nazareth, cool.

When I figured I had enough chops to get a bit more serious, I put an add in the Straight (local arts & culture rag) for people into Motörhead, Exciter, Culprit and stuff like that. The only person that answered was Ray. He and his brother were the coolest guys on the block and just happened to be into all the same shit I was digging.

We called ourselves Death, then Oblivion, then I happened on The Malleus Mallificarum in the school library. So I lifted it and the speed metal scene was on. 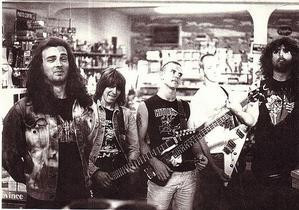 COVENANT: At this point WITCHES HAMMER is a band practically revered as mythological among underground cultos. Folks like us (in our late 20’s early 30’s) have only heard rumours and read interview questions of the old days: chaotic house parties, wild violence at gigs, and a forward thinking attitude that seems to be a thing of the past. Can you give us a bit of a glimpse into what harsh METAL looked like in the Vancouver area in the mid 80’s?

MB: The things that are interesting from back in those early days, to me anyway, was that we weren’t clean, old enough, or polished up to be taken seriously by the metal and heavy rock scene.

That was when Helix, pre-glam, Van Halen, Maiden, and Rush were massive. The early eyeliner, hairspray metal days. Those dudes looked at us with our greasy hair, ripped up poor clothes, and just thought we were punks.

We played way too loud and way too fast, so they told us to fuck off and take our punk rock crappy attitude with us.

No problem, I didn’t like those sweet smelling douchebags anyway.

So off we fucked into the dregs of the East end [of the city], and cut our teeth opening up for far superior acts like DOA, Death Sentence, SNFU, The Accused, and Verbal Abuse.

Those cats got it right away, those were the first crossover shows, and those other glammy creeps were out of the picture.

Of course, performing our very first show, my first EVER live show with Exciter, Exodus, Metal Church and Sacred Blade was a huge deal for us, and especially because that was the era where every gig like that was laying a foundation, building on momentum. The Metallica “Ride the Lightning” tour had completed tore the city’s music scene a black hole. What emerged was an army, literally overnight, of people breathing this new found energy: our era, our niche, our generation had its sound and it was profound.

So with that we had our bridge between the outer municipalities and into the city. We hit it hard. The kids started renting halls and putting on wicked sold out shows. We weren’t old enough for the bars; well, we could play the bars with the punk bands back then, but the kids our age couldn’t come to the gigs. So metal shows were underage teenage riots. Thrown at house parties on the weekends and rented skating rinks and halls the next.

That’s where it was at: independent, DYI, very cool, I thought.

COVENANT: As the first speed metal band in Vancouver/Western Canada, what kind of challenges did a band like WITCHES HAMMER face in an otherwise barren wasteland of uncompromising heavy metal?

MB: The challenges were; We were really young, uncompromising, and hated authorities, especially promoters. We weren’t really trying to appeal to a larger audience outside of our style. We felt it was necessary to be completely rigid in our approach. Because things were so new, it seemed that if we let up on our ideals, it could be lost with a whisper to sleazy pimps and pushers. So we held on with an iron grip

COVENANT: In that relatively brief career you played with some top-tier legends like Exciter, The Accused, SNFU, Exodus, and Metal Church. What are some of your favourite memories from those old gigs?

MB: Favourite memories for sure were the first 2 shows we performed at:

When we hit the stage to open for the Exciter gig in ’85 that I mentioned, I was 15 years old. So of course this was quite overwhelming, as apart from performing at junior high school events, this was a near capacity crowd of raving denim and leather fire-breathing maniacs!!

Daunting to say the least.

An excellent way to cut our teeth I think. Into the storm head on, whatever happens happens.

The other great memory for me personally, was opening for Death Sentence and Verbal Abuse at John Barleys in the east end. That’s where the crossover style began in Vancouver. The hardcore punks accepted us full on, we really enjoyed that whole complexion and style. Suited us well. That’s where we fit in best at the time. Not to mention, in ’84 and ’85 there weren’t any other speed metal or thrash metal groups around yet.

We were it.  Our niche was bored out into the fabric of the underground music scene. 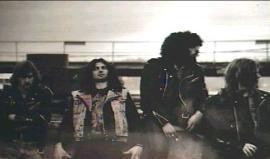 COVENANT: By the 90’s the band seems to have dissolved fairly unceremoniously (with an unreleased record nonetheless!) What lead to the end of that era and the long dormancy to come?

MB: From 13 to 19 years old, people change a lot. So did all of us. Some of just up and left the province, I joined up with Blasphemy, Mike Death went to Procreation, John onto Armoros and Procreation. Not to mention, we’d run our course at that point.

The scene was dying out. Violence at the shows a year prior was out of control. So for many people, it just wasn’t worth it anymore to bring your girlfriend and buddies out to see a band, and instead just get your teeth knocked in by skinheads or various lunatics that figured the pit was the place to assault anybody without issue. It had to burn out.

The days of sold out underage gigs weekend after weekend from around ’84-’87 were gone at that point.

COVENANT: You have Canadian Speed Metal, Stretching Into Infinity, and Dead Forever which are all postmortem WITCHES HAMMER releases, and seem to get more and more complete with each one. Explain how these compilations/unreleased albums came about. Where was this material hiding all these years? And which one stands as the definitive statement on what the band was all about?

MB: They weren’t really hiding. We just weren’t very approachable or compromising in our self promotion.

We really truly believed rigidly that the DIY underground scene was where it was at. It was an attitude that was really just an aggressive testosterone fueled teenage angst, Fuck the industry, we’ll just steal it, kind of of attitude. That was that.

COVENANT: The return of WITCHES HAMMER is huge! In the past 10 years many bands once-thought gone forever have returned to the stage. Some wildly successfully, and some less so. Personally, what do you hope to achieve by bringing WITCHES HAMMER back from the dead?

MB: I don’t really have any hopes of silly nostalgic reverence. I’m just going to perform as always.

However or whatever goes down is the way it should be. I’m cool with getting John and my music done. It’s cool to jam with Ray. Great performing with the boys. It’s a good time.
We will record these songs. See what’s left over. Hit a few festivals and shows.
That’s about it I figure. See what happens.

COVENANT: We’ll quit living in the past and look towards the future. The time seems right to give a new breed of fans raised on the internet a taste of what was. What forces awoke the slumbering beast that is WITCHES HAMMER? Tell us what is coming next from the band. Can we expect new music? More live appearances?

MB: I despise living in the past. I absolutely cannot stand looking back at past accomplishments. It bores the hell out of me.

This came about because John [original drummer, who died in 1997] and I had written a host of riffs and song we never recorded.

I would have took them with me to the dust if Ray, Yosuke [of Nuclear War Now! Records], Mike Death, and Steve hadn’t convinced me to do this for Big John’s memory. This is a part of his  legacy as the man that helped to create what we call extreme metal in Vancouver

COVENANT: Our thanks to you Marco! Until Covenant IV, we eagerly await to see what you all have up your sleeves. This will be something to behold! Until then please leave us with your final thoughts on the matter …

MB: Thanks for having us guys. Covenant has always been a cool thing since its inception.
We’ll catch you deathbangers, firebreathers, Witches and destroyers in the Covenant pit … into the pentagram!