The Covenant is Canada’s Black Magick Inner Circle. What evolved out of insular extreme music camaraderie and like-minded black/death/heavy metal bands spawned a festival series, artist collective, live music promotion, online magazine, and much more to come. Members from the Covenant Circle explain the ongoing history in their own words: 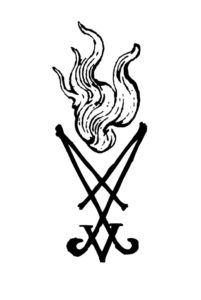 S. HACHE: The first spark began as Friday night music and alcohol rituals: A bunch of newly-met fiends happy to find like-minded individuals in the Vancouver area who worshiped similar musical tastes. Those nights allowed us to pool our collections together and play rare vinyl shit, including brand new album release sessions the day a record came out. 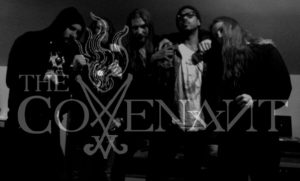 J. ANDERSON: We lit candles, swilled beer, and subsequently lost our minds over our favourite bands` latest offerings. Like most people in this city at the time, we had no place to listen to the music that we idolized, but at least we did have a crazy group of people who shared the same wild visions.

S. COGGINS: Working in the Emily Carr University woodshop, I was able to play whatever music I wanted and from it I made some key friends: Jamie Ward and Claudia Fernandez. Claudia happened to be a super cool woman who unknown to me loved metal from a far. Her husband at the time also happened to be a guy named Ernesto who was part owner of the Waldorf hotel. Back then it was in full swing with multiple shows, music nights, and events going constantly. It was something of a hub of music and culture over the span of a few years. Claudia was convinced that we should should come play records in their Tiki themed basement packed with massive vintage Klipsh speakers, projectors and zero constraints on what we played or displayed. 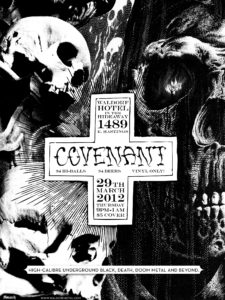 Around the same time Shawn and Josh were toying with the idea of a production company to start bringing bands to town that we wanted to see. They called their initial venture Congregate Entertainment, and on the original list of options unbeknownst to me was COVENANT. When Claudia proposed the potential of a vinyl only metal DJ night to me I started coming up with artwork, a name, and getting the boys on board because it was something that we had to do together. For reasons that should need NO explanation we decided on the name Covenant, and truly a pact was made at that point even if we didn’t realize it. It was clearly Meant To Be because we all arrived at the same name and never realized that it had happened that way until a drunken Friday six years later. Covenant was born! 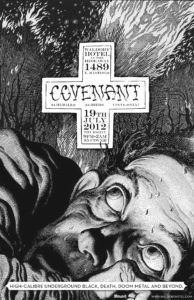 In that Tiki themed room we played savage horror flicks selected by our resident cinema encyclopedia Jamie Ward, built altars of skulls, pyres of incense, and put those glorious speakers through their paces with our favourite records. If we didn’t own it we didn’t play it. After a night of self indulgent excess, blurred visions, and ears ringing it was mind blowing to us when they handed us money in the end! 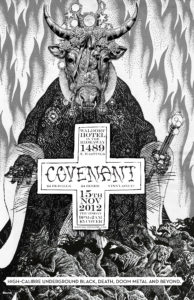 We realized that we could actually make money from those nights and set our goals higher. If we get the support of our community we could use the revenue generated from shows and put it towards a festival. A local festival supported to local bands that would create a community, and allow us the ability to bring in bigger and better bands. If we pool our resources as a community then we all win in the long run. 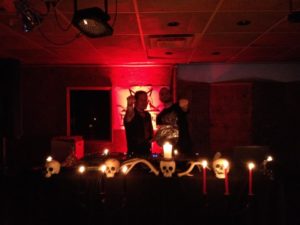 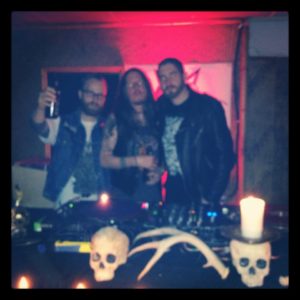 S. MONTESI: My personal first attempt at creating something related to this type of music that wasn’t audio was an (extremely) short lived ‘zine called Crypt Ghoul. For the life of me, I can’t really remember everything that was in it, but there was an interview with M.K. for his band Bone Chalice, as well with an interview with Shawn Hache of Mitochondrion.

The first time Shawn and I had ever made contact was a number of months before that on the now-defunct Vancouver heavy metal forum Bloodred Metalheads. At the time I was utterly obsessed with (and possessed by) the mystery and enigma surrounding ex-Kataklysm vocalist Sylvain Houde. I actually still am, truth be told. I made a post asking if anyone had any info, videos, or photos of this elusive beast, and not twenty seconds had past before Shawn swooped in, clearly amazed that someone shared the same obsession. I could tell that this was the mark of a severely brain damaged individual, and quite clearly someone worth collaborating with.

S. MONTESI: At this time, the girl I was dating was a local promoter who put on all kinds of heavy metal shows. I had put on a few shows too, mostly as ways to give my band a platform. I felt at this time, 2010, that we were too strange for most promoters to place, and I largely felt like no one wanted to work with us. On one hand the music was too melodic and clean vocaled for most of the discriminatory black/death metal promoters, and on the other it was way too dark and deranged for most of the regular local promoters. I had booked a few tours for us, and we had done one local Chuck Schuldiner tribute show. I felt that I was starting to understand a little how to put on a show. 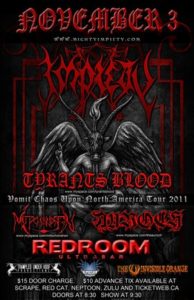 In early 2011, I saw an ad from the Brazilian booking agency Insano saying that legendary Singaporeans Impiety were doing a North American tour, and they were asking promoters to get in touch. In a moment of excitement, I asked my then girlfriend if she wanted to put on a show together. We put together the great lineup of Auroch, Mitochondrion, local masters Tyrants Blood, and of course, Impiety. This was the first time Auroch performed without Cuillen Sander on vocals, which while personally sad and strange at the time, signalled a rebirth in to what the band has now become. This marked the first time that Auroch and Mitochondrion played together. Personal highlights and conjecture aside, this night featured all the trappings you would imagine of Impiety’s first show in front of Ross Bay maniacs. Pigs blood everywhere, backroom debauchery, controversial statements from the stage… real chaos embodied, signalling a paradigm shift.

S. HACHE: Out of the first few DJ nights burned a desire to take this experience to the next logical stage. We originally had the idea to host the live versions of these records we were playing, with the eventual intent to make a festival around that same idea. In fact, if we dig up a sheet of paper that we used to brainstorm “festival name ideas”, you will absolutely see “Covenant” on there among many others. The goal has always been to infuse the live show with the spirit that we managed to capture at those record nights: a group of die-hards huddled around a turntable, freaking out over albums they all love. But, how do idiots with very little experience in the live music world actually put on a bigger gig … successfully? And, how do we keep it unapologetically underground while making enough cash to keep it afloat? 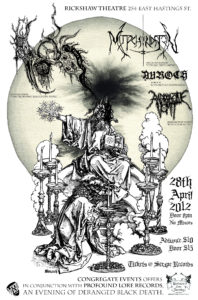 Having come from playing in bands that grew up in basement shows, all-ages halls, and dive bars it was the only way I knew how to run things. There were a few shows under my belt at the time from around the Victoria/Vancouver area: Weapon, Toxic Holocaust, a handful of Mitochondrion shows – so I wasn’t completely coming from nothing. The ethos was always the same though: Show up, set up, play your songs, know your place in the grand scheme of things, and always keep your egos in check – everyone gets a fair deal and gets treated well, no matter who you are. 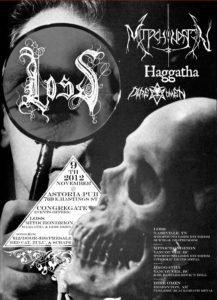 Around the same time Sebastian was also doing local gigs here and there, and just before we started working together in Mitochondrion/Auroch, we joined forces in a number of Congregate shows. All together the lot of us did shows for Antediluvian, Impiety, Loss, and co-promoted a few big shows with The Invisible Orange for Absu, Inquisition, and Marduk. (Mayo and The Invisible Orange would eventually become an instrumental part of the Covenant team, and allowed us to take this campaign beyond what we thought was possible.) We knew practically nothing, but learned the ropes through total failure, intuition, and fluke chance. The stage was set for the next level. 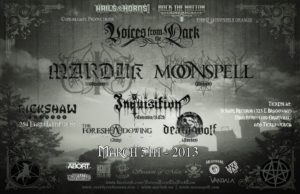 S. HACHE: The major goal was always a festival. From day one this was the narrative arch that we would strive for, and ultimately realize almost in spite of ourselves. One dark rainy night in a local Vancouver brewery, the spark of Covenant Festival would catch fire in our minds based off of a few excited, drunken text messages to friends in bands across the country and down the coast. Based on the quick responses, the next thing we knew the genesis of Covenant Festival I was in motion, which included hosting the first come back show for Rites of thy Degringolade in 10 years, the first Vancouver performances of Weregoat and Ritual Necromancy, and the opportunity to showcase many of the bands from our inner circle. 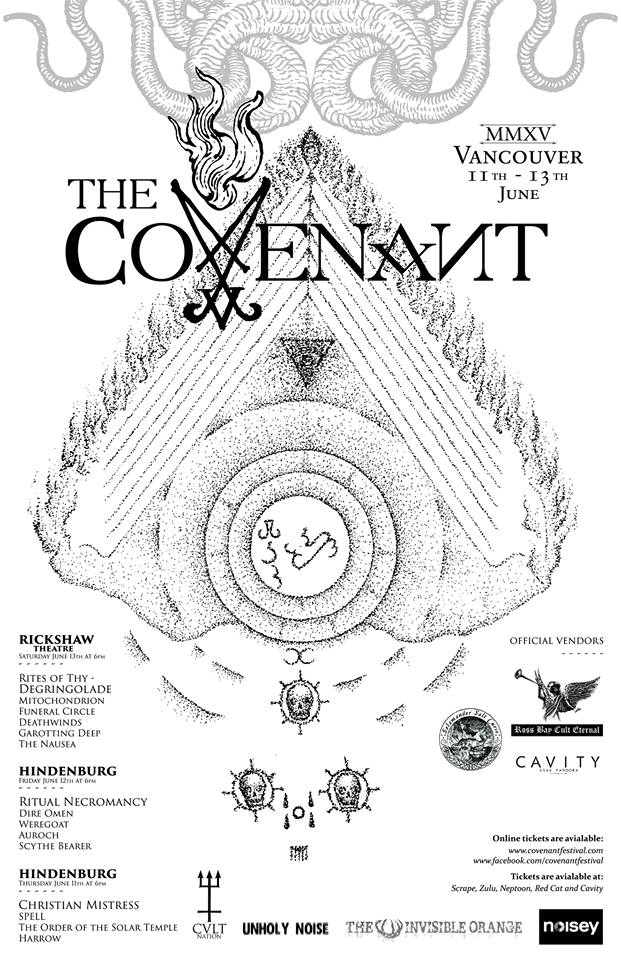