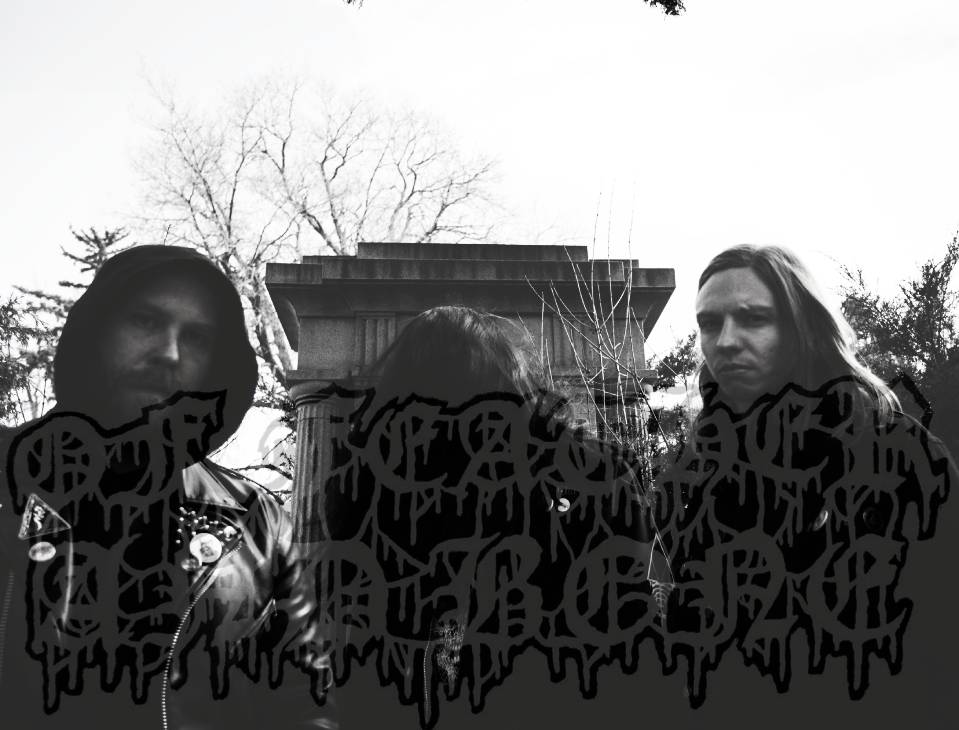 With the American death metal renaissance in full swing, it seems that at every moment a new band that one cannot afford to miss arises immediately to the forefront of the scene. With intuitively anthemic songs, exciting merchandise options, and legion of adoring fans, these bands seem to wield a growing notoriety that you would expect of old veterans.

With more interest in the genre, and specifically subgenre, than in many years, it often looks from the outside that a measure of success in this field is nearly a predetermined act of cause and effect simply through starting a grimy, slimy, crawling, drooling death metal band within the USA in this interstice.

One band uncomfortable with resting on their laurels is Denver’s Of Feather And Bone. The band has taken the professional and stoic stance of remaining suspicious of their own achievements. Born through years of musical gestation, independent touring, hard-grinding work ethic, and strong self-belief, the trio has gone from being a rising prospect to a legitimate contender. In what seems like short order, but after this simple conversation with frontman Alvino Salcedo, you will be convinced otherwise in no time at all.

We interviewed Salcedo in the weeks leading up to Of Feather And Bone’s first European tour as a death metal band, under the venerable Killtown Bookings banner, and alongside Ritual Necromancy, a favourite at the Covenant HQ, and Tomb Mold. Encapsulated within are the words of a band on a rapid upward trajectory.

At this point it should come as no surprise that Of Feather And Bone started off as a more hardcore/punk oriented band that would slowly morph into a death metal band over the years. This has left many people not knowing the band’s origin story or finer details. For a genre’s fans that are historically obsessed with detail and factoid, this is an extreme rarity indeed. With a blank slate situation before us, we prodded Salcedo to provide us with an explanation of this often controversial origin story. 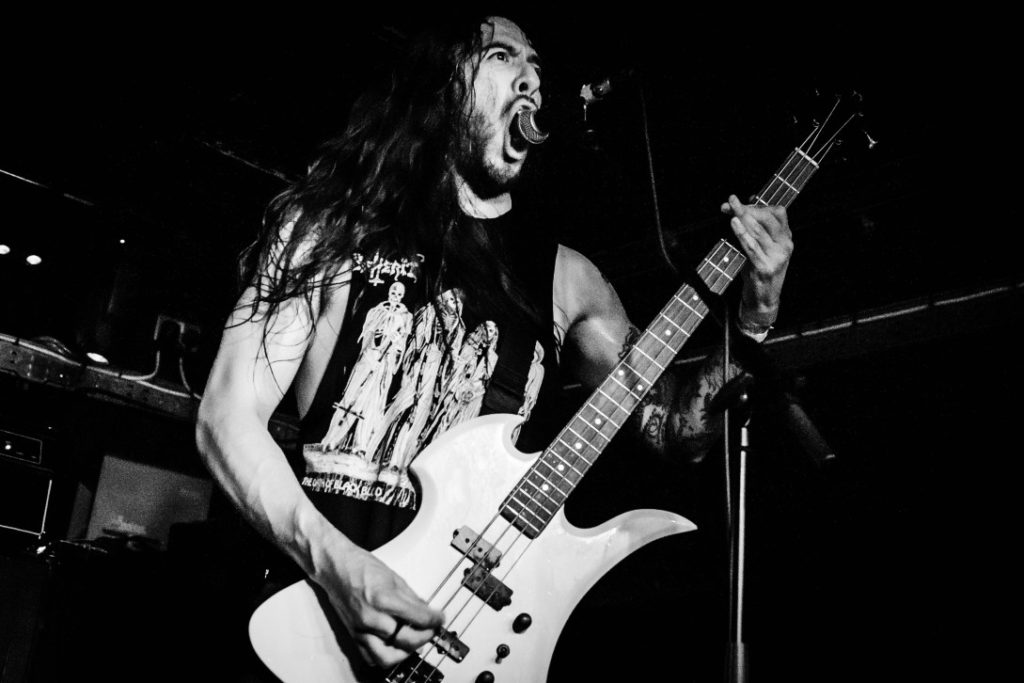 The assumption that the band took up death metal overnight is patently false. Of Feather and Bone has been a band since 2012, and at that younger stage they presented a sound was very rooted in grind, crust, dbeat, punk and even death metal and black metal. Alvino claims, “We learned very early that it was hard for us to completely immerse ourselves in any scene. Hardcore hated every second of us. Again, we have always played blast beats and that always went over poorly.” However, the band continued touring, knowing that if they were to be respected it was going have to be in the live arena. Of Feather and Bone had to prove that they, “aren’t a flash in the pan or to be taken for granted,” with what they do best.

Having first cut their teeth in the Denver metal scene, audiences stood up and took notice of their talent, live shows, drive, and intense motivation. Their specific sound became irrelevant in a scene as diverse as Denver’s, with no two bands sounding the same. He adds, “that diversity and openness made it easier for us to ease the transition of the new material.” 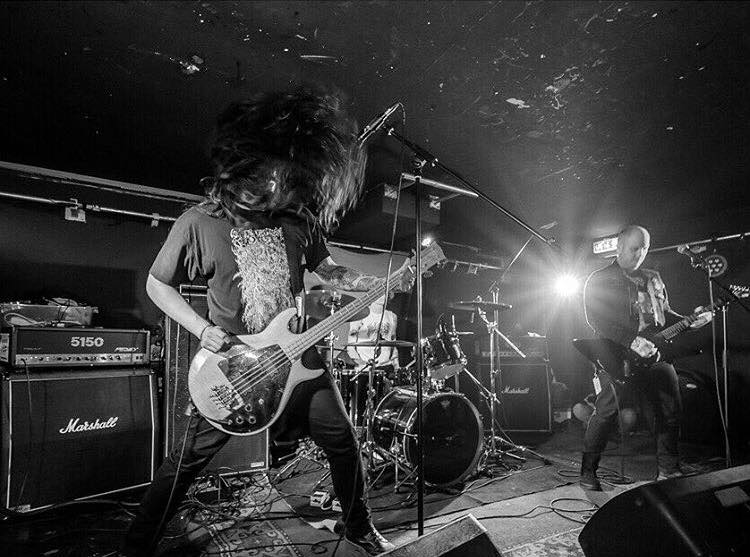 Up until that point, he continues that the earliest material was written in a, “formative period of the band where we were still figuring out where this band would play its role in all of our lives. We were still getting used to writing with one another for a style we were trying to form. By the time all of the old stuff and even the first LP was readily available to a larger audience, we had written those songs so long ago. We sat on those recordings for over a year. Then it was finally released and we had to tour on them.”

Not writing was not an option. The gears started to change and an evolution was afoot. “We were already in the skeleton stages of writing the Pious Abnormality demo. We were tired of playing the style we had. We evolved, which honestly, if anyone can’t understand that evolution aspect as an artist, then it must be a charmed life being born with Altars of Madness in your hand as you came out of the womb,” Alvino admonishes. The man has a strong point. In this light, he argues, the band has never disrespected death metal in any way. Rather, as he continues, “we have had to scrape from the bottom of the abyss to be where we are. We put our own take on a genre that can very formulaic and obsessive with a classic sound. We just want to play the music we like to listen to.”

It’s eternally important to give a platform to the accused. Let the individual argue his case and let the chips fall where they may. Witch hunts have run amok lately, and the importance of putting a stop to an unjust one cannot be overstated.

There has, of late, been a large sample size of bands that formerly played hardcore transitioning into playing death metal, with varying degrees of both sincerity and success, of course. People who are deeply bothered by this could be accused of gate-keeping, or having a “nimby” attitude. There’s something legitimate to wanting one’s food to come directly from the source, and not from a processing plant catching on to the latest trend.

With the hot seat light on him, Alvino answers without apology, “I guess a lot of people could throw us into there if they wanted to. I understand wanting to keep your music genre community elite.” Understandable indeed, but he continues, “when one or a few bands are insincere in their motives, I feel that can leave the impression that all bands doing the jump to the next trend are also just looking to get popular or whatever motive they may have. I think I leave it all to the substance of the band. The caliber of playing and the creativity of the songs and riffs and structures. These true aspects can’t be hidden.” No they cannot.

In fact, there is a weakness that prevents true sincerity from ever shining through. “A lack of absolute and true visceral passion and sacrifice to this [music] is not for the weak. When those who seek to exploit don’t receive immediate praise and ‘hype’, it’s off to the next trend”. Essentially, the argument is that the scene should organically weed itself out. That’s the theory at least, and it’s a powerful one at that.

After giving the man a chance to fight back against the accusers and state his case, we are more than satisfied. So it’s time to move on and let the music speak for itself. The band’s seminal death metal debut, Bestial Hymns Of Perversion, was met with a rabid out-pour of support and has become an immediate favourite in much of the underground. It finally let the band do, “what we have wanted to do for so long. We wanted to just write punishing and unrelenting songs with a touch of somber and sad tones”, he tells us. Mission accomplished, as the album is intense, utterly merciless, and completely unforgiving, yet it remains difficult to place one’s finger on exactly what makes it so interesting. 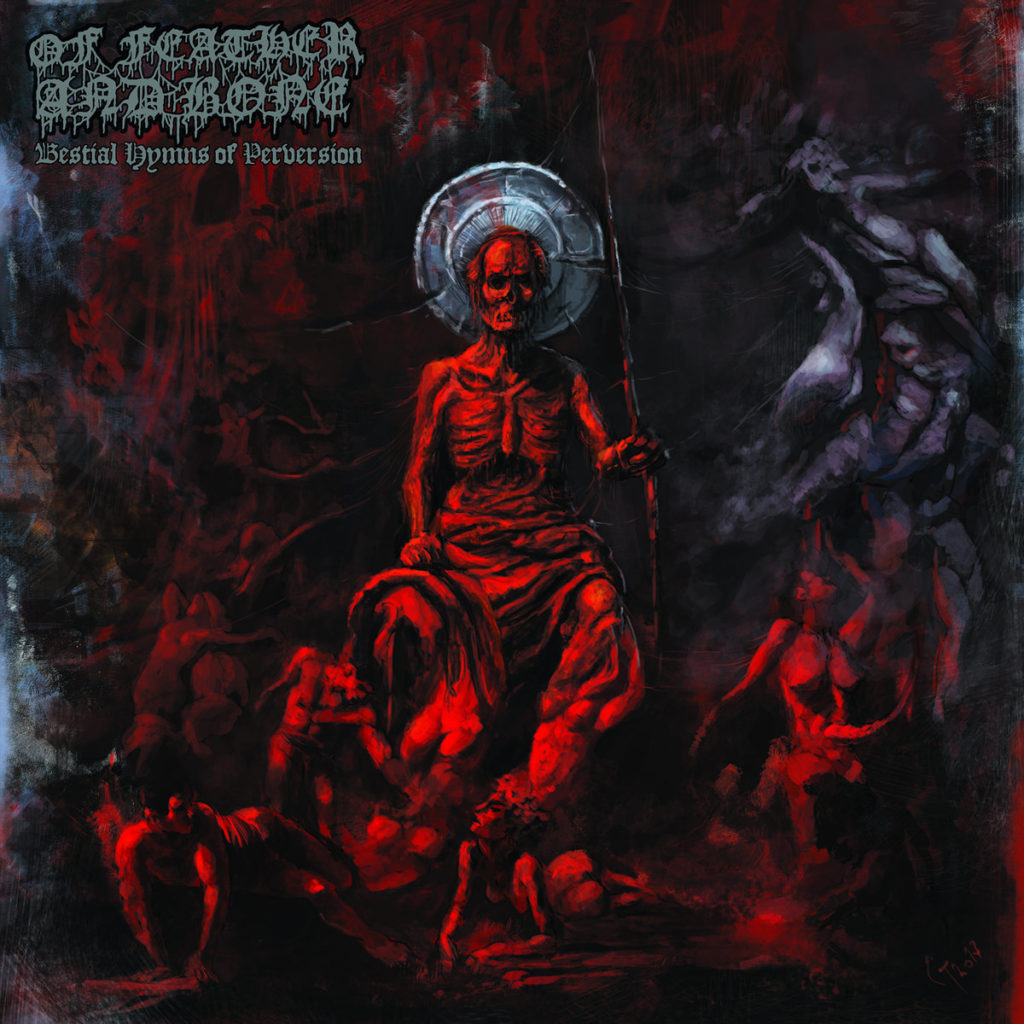 What ingredients exist in the formula that  made this take on a classic sound as potent as it is? Alvino responds, “the record is raw because that’s how we approached it. Just a blast of everything we have held in. We got criticized for the album being too blast heavy. Not enough dynamics. Not enough absolute cave man shit. We succeeded at what we wanted. We want people to feel uncomfortable while they listen to it. We don’t want to give gratuitous groove to anyone. We want you to stand there and become exhausted.”

Right, right – and it shows! Where does this rageful inspiration come from during this process, we wonder. There has to be a specific source feeding this beast. It’s always interesting to understand a band’s melting pot of influences specifically, but more so how it interacts with the artistic process.

Alvino indulges and reveals that, “if I had to say anything or anyone in particular; we turn to Temple Nightside, Impetuous Ritual, Portal, Dead Congregation, and Morbid Angel to name a few.” Really there should be no surprise there, however, more than just emulation, “it involves referring to them as a whole and how they tend to write.” Are there specific songs you can cite that speak to you? He mentions, “when it comes to writing lyrics or trying to do different dynamics with my voice, I do refer to songs such as “Serpentskin” by Dead Congregation (editor’s note: nice job, Tim!), “The Cornucopian” by Abyssal, or “Entrantment of Evil” by Incantation. It’s mainly the way the syncopation of the vocals to, in particular, blast and fast parts help me to try and stay creative and ensure not every blast section has the same type of vocals over it.” After a quick check of our recent playlist, yep most of those are there. We’re in good company.

RIDING THE WAVES OF DEATH

In an effort to touch on something earlier mentioned, we push to dissect how fever-hot the American revival of nasty, rotting, OSDM is right now. It seems every couple of years there is a certain sound that takes the epicentre of extreme metal focus. From the shuffling hordes of Incantation clones in the late aughts; to the swirly, technical death metal craze influenced by Gorguts, Deathspell Omega, and Portal; to the utter tsunami of so-called Nidrosian black metal sound-alikes, all micro-movements have yielded particularly potent results. It must be thrilling and challenging to be a band at the forefront of this movement at any given time.

Alvino echoes that sentiment, “some of the challenges of course are being under an intense scrutiny of every action you make. The music you write is under strict review in every action from tone, to approach, to arrangement, to every little bit of it,” he states. Nearly sounding exhausted already, he reveals, “You can kind of get lost focusing and thinking when you approach writing that you may want to write to cater to such punishment from people who aren’t even in bands. But with that said, it’s a centering feeling. It helps you remember why you started writing and playing in a band.” 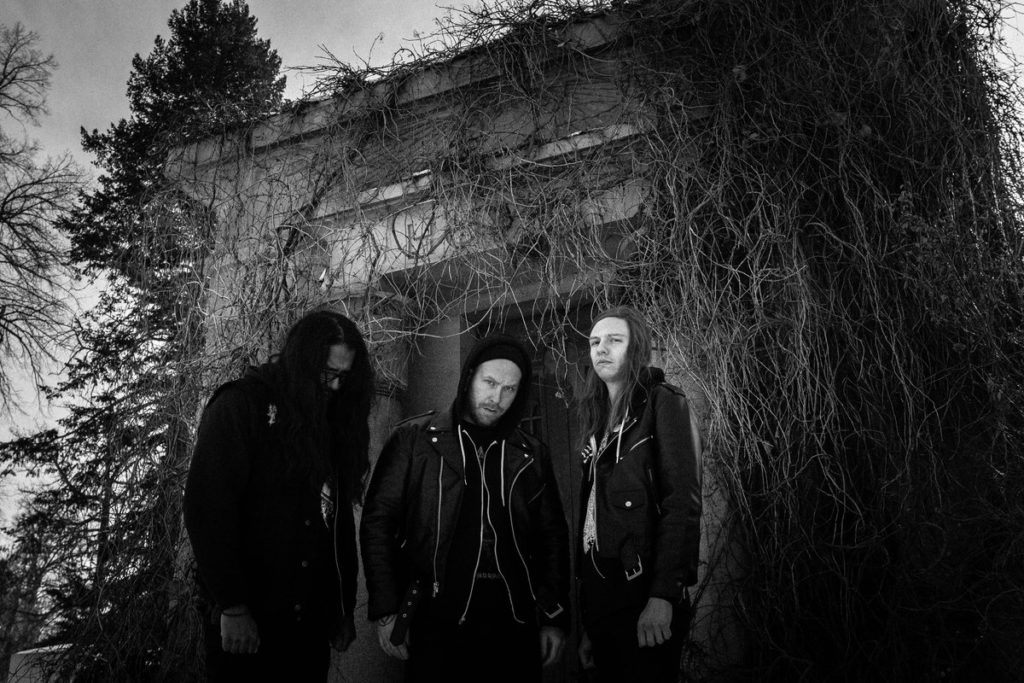 Undoubtedly the benefits outweigh the hardships. Any band is lucky to be mentioned in the same breath as the greats, and this is not lost on Alvino, “we have made a name for ourselves and the people who do truly like us and follow us will hopefully be excited to see us evolve into new material. The support up until now has been amazing and we couldn’t be more grateful.” There’s a reason for this. He chalks it up to the fact that, “we try to define our own take on a genre that is being defined, so maybe one day someone looks back on our band and appreciates that we did it our way and brought a flavor to it that wasn’t typical or cliche or boring.”