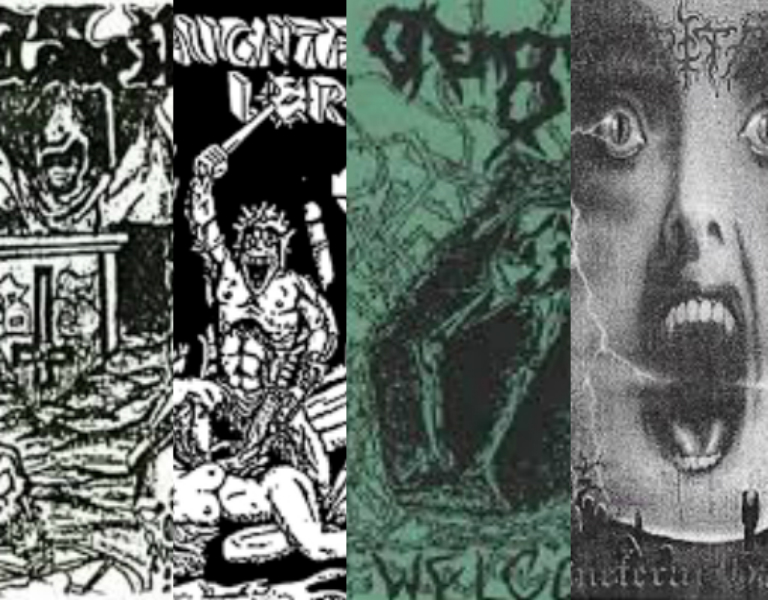 The obsession with obscurity is the metal curse and blessing. On one hand it can lead to fulfillment on an otherworldly level to discover a hidden gem that was lost to the sands of time, and on the other hand it can become a rabid addiction to find the next sound to satisfy the frantic craving. We give in and indulge as much as possible, seeking that next high. Then the next step and major part of the obsession is to then share the coveted find with fellow addicts.

But it’s all subjective. Which is why we have sourced 5 of the most obscure, yet foundational, demos from the backs of our cavernous, filth-covered minds.

The criterion was simple. We chose demos that we believe were either not given adequate praise, represent a key turning point in metal’s history, or were seemingly collectively forgotten by the masses. Of course these are our opinions alone, but if we can shine even the smallest spotlight on these gems then it’s a mission: accomplished. Let the Light shine …

When seeking the gestation of chaotic and cruel sounds many metal historians will cite Necrovore’s 1987 demo as the earliest and most extreme example of black/death metal as we know it. While dubbed to death and worth of infinite praise, it isn’t the island that many consider it to be. Fellow Texans Blood Spill would come forth merely a year later with a fear-inducing sound capable of unsettling the hardest headbangers.

Without a title at the time, the 1988 demo would be re-released as Demonic Plague over 30 years later, revealing a world of horror that had been hidden for decades. Lead by the inhuman screeches of Bloody Freddy Rodriguez, these Texan teenagers managed to evoke a sound that gave Sarcofago, Pentagram (Chile), and Morbid Angel a run for their money.  The band literally cites that only Possessed, Sodom, Bathory, and Death were known to them at the time, and it shows! Blood Spill wrote absurdly long songs for the medium and the age they were working in, simply providing us now with more time to listen to a bygone age. 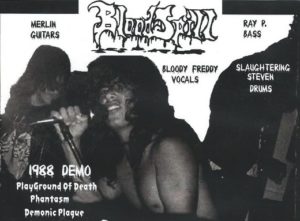 The creeping darkness achieved on this angular tape further enforces the idea that chaotic black/death metal was a global phenomenon, regardless of place and connection. Blood Spill’s demo stands as an 80’s time capsule and reveals another layer to black and death metal’s incubation. The spores were dispersed by the original masters and the putrid results took root.

The days of youthful recklessness working in a near solipsistic bubble – An almost impossibility in our internet age.

Perhaps because of their continual foray in to a different “scene” of death metal, perhaps because we here at Covenant have no taste and are so wildly off the mark, perhaps because it came out in the deadzone of the mid 90s, or perhaps (and most likely) because simply not enough people have heard it. Decapitated‘s utterly mind-blowing Cemeteral Gardens is one of the most underappreciated releases in death metal.

Featuring a sound that is nothing like the whirlwind madness of Winds Of Creation, and certainly nothing like the modern style of razor-sharp (albeit a dull razor…) tech-death that they graduated to later, this demo is a charnel house of morbid and macabre riffs and ideas that would not be out of place in early Entombed, Dismember, Nihilist, nor Carnage, neither would it they be remotely foreign on the records of similarly boundary-pushing-yet-old-school-minded luminaries of today like Obliteration, Taphos, Excoriate, or Necrot. 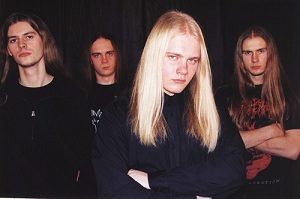 Constantly showing hints of the potent and skilled musicians they would become, it is easy to lose sight of the fact that when this demo dropped, the two founding members, Vogg and Vitek, were 16 and 13 respectively. It’s a staggering fact that moves the digestion of the execution of this demo from impressive in to the realms of the otherworldly.

Nothing we can say is going to possibly touch just how phenomenal this release is, as music will always be higher than words, so stop reading, shut the fuck up, press play, and start wondering why this demo does not get the same adoration as Feasting The Beast or Abominations Of Desolation.

We’re coming to a consensus that the phenomenon of extreme metal organically grew concurrently across the globe. What was this spark of inspiration that drove teenage maniacs during the 80’s into a hyper rage of chaos? It’s like a collective switch was thrown that drove harder guitars, faster drums, thicker productions, and more vicious sounds.

If you know the history of Australia’s metal scene, then you know it’s one of extremes. Always feral, always uncompromising, and always full fucking speed. It’s a signature madness that fueled the sounds of bands like Bestial Warlust, Vomitor, Destroyer 666, Gospel of the Horns, Abominator, Destruktor, and several others. Somewhere between “blackthrash”, “metal of death”, and “war metal” is the Aussie sound. And it can be argued that this is where it all truly began … 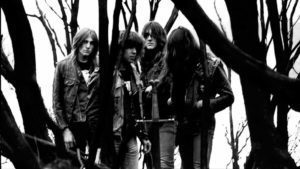 Slaughter Lord‘s Taste for Blood demo came screaming into the Earth in 1986 somewhere on the savage streets of Sidney, Australia. With a dense impenetrability balanced out by a genuinely nasty production, this was a tape that managed to harness the most wretched elements in the metalhead’s arsenal at the time. Where the path was laid by Bathory and the Teutonic thrashers’ first albums, the young Aussie demons pushed the sound harder and faster. Devious guitar tones, blast beats, intricate passages, and hellish vocals. And, while the demo is easily considered a thrash classic, it is clear that the music was deeply wading into the death metal and black metal territory, possibly unknowingly. 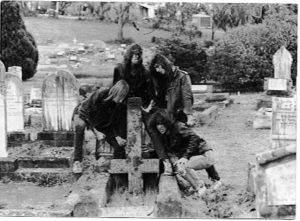 The music of Slaughter Lord would come to the popular consciousness through Invictus Production’s first catalog release. The Thrash ‘til Death compilation gathered material recorded between 86’ and 87’, and presented the world with a refined, sharper sound from the virtually unknown band. The label took tracks from the first demo and expanded it to practically a full album release, with a slick mastering job that brought fresh life into the ancient hymns. It stood as further proof that no matter which corner of the globe, there was a band of demonic maniacs scheming pure hell that must have come from a sadistic collective unconsciousness.

Anyone familiar with the state of modern black metal is aware of the name Revenge. Canada’s most bestial band has taken a long and complex road from obscure filth mongers and graveyard dwellers to the juggernaut force they are today. The past is ever alive in their sound, but the band itself is infused with the past work from potent acts like Conqueror, Sacramentary Abolishment, and Cremation. Not much is known about J. Read’s first band, nor of its earliest days outside of the most sickening sounds conjured on a spread of technical, malevolent, and vile demos. And even then, we still only know so much.

In 2009, Nuclear War Now! Productions released the Black Death Cult compilation of Cremation’s most hideous demos. This harrowing collection included the gut wrenching trinity of Pire Gah Hoath Raclir Od Ialpor (’93), Hail the Rise of Med Pe Gal (’94), and The Flames of an Elite Age (’95). But namely absent from this set was the very first demo, 1992’s Welcome. While prior to this release most of these songs were relegated to the darkest fringes of file sharing sites and services, though still attainable. However, the tracks off of the inaugural demo were practically thrown into the abyss of time itself. Rarely heard from at all.

If you are lucky enough to have heard Welcome, then you know how tragic it is that this piece of Canadian metal history has been swept aside. What lies on this filthy tape could have stood shoulder to shoulder with the output coming from the swamps of Florida, the gutters of New York, and the gloom of Birmingham at the time. You will discover that it is an old school American death metal and early British grindcore sound that some of the most infamous black metal villains cut their teeth upon. 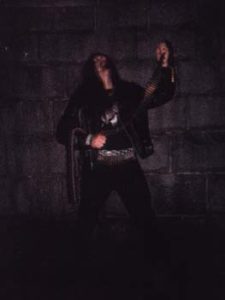 While most likely unknown outside of Western Canadian circles and utter Ross Bay fanaticism, the Welcome demo represents a band in their infancy who are capable of greatness. With the level of mastery on display here, it is little wonder that on their subsequent demos Cremation achieved levels of extremity almost never matched again. Their descent into truly sickening and crepuscular territory made them the thing of legends. Although, their origins still deserve a place out of the shadows of neglect, even if only among the most fanatical black/death metal maniacs.

Cynic‘s 1991 demo represents an interesting and singular time in the band’s discography. Shedding the thrash metal sound of the their first four demos, this release saw the band move on to a sound- or perhaps through a sound- that was completely its own. Far too harsh to draw distinct connections to 1993’s Focus (despite sharing 2 of the same songs), and far too merciless to be recognizable as the band that released the interesting, but far less mature demos just some years earlier, Demo 1991 genuinely showcases a moment in death metal’s development where the rules were not yet set in stone, and the ethics were still being invented.

At points sounding like a more violent version of Death, and others not unlike the early Montreal death metal scene or the early Deicide releases, the release features a primitive production to juxtapose the wild technicality, that wouldn’t be out of a place on a Portal or modern black/death metal release. While the release has a very well executed remaster available on YouTube that is worth checking out for those already familiar, it is the surprising savagery and shocking bestial sound of the original that lends it a unique and sinister charm. 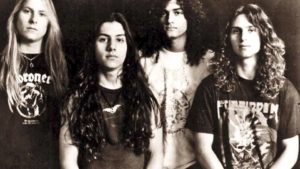 As the barrage of off-kilter and impossible riffs rain down, it’s the moments of contrast like the tiny hints of vocoder vocals (a sign of things to come), the brief acoustic instrumentation, and disgustingly accurate guitar solos that destroy any semblance of listening to any one cohesive thing. The solos would still be considered of the highest standard on a modern release, and the level of brutality and atmosphere on par with anything being dished out now. It is because of this that this demo remains an obscure classic.