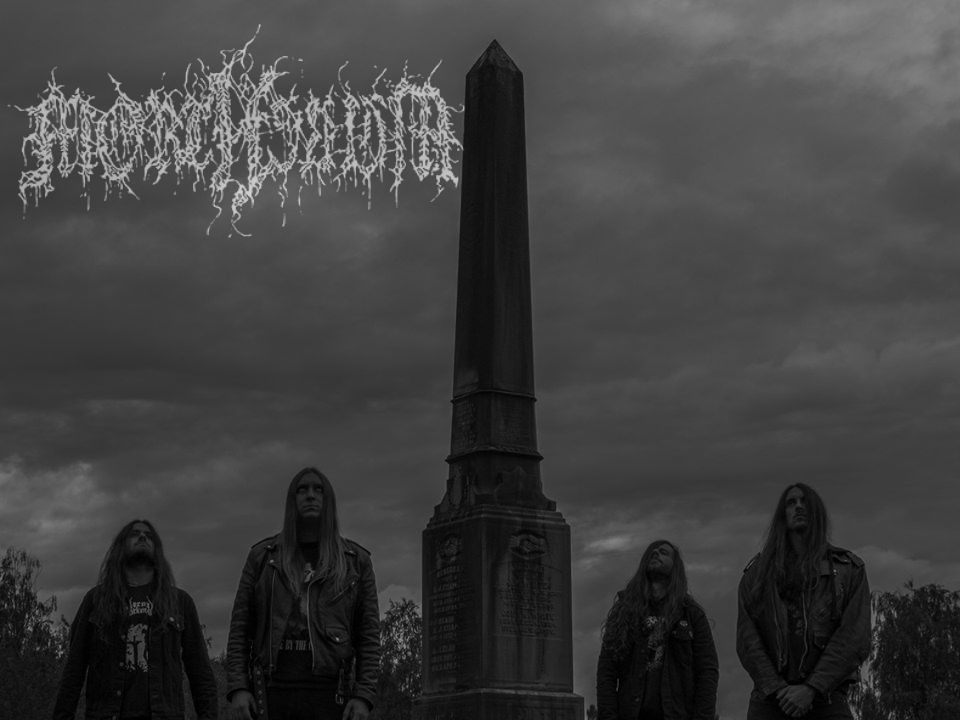 That pivotal moment in time is nearly upon us once again, a fleeting three nights of morbid celebration to the outermost regions of the sonic realm: Covenant Fest V. Looming like some hideous mecca for the lost and the damned, the annual event has drawn out a veritable array of degenerates, blasphemers, and prophets of the end times. Among the tide of bestial noise already setting its sights on Vancouver, the death obsessed collective, Mortiferum, promises to deliver a particular shock of devastation to the fest proceedings.

With two feet in the grave and a firm grip on the heels of the world, Mortiferum channel their bleak visions of post-mortal horror through their pummeling approach to death doom. “On the demo, lyrically, the songs deal with death, dying, and what happens after you die.” states guitarist/vocalist, Max Bowman. “There’s plenty of this on the upcoming full length, Disgorged From Psychotic Depths, but some of the lyrics on this album have been fueled by dreams, stories, and a few recurring lyrical themes are post-mortem consciousness, ascension, descent, chaos.” 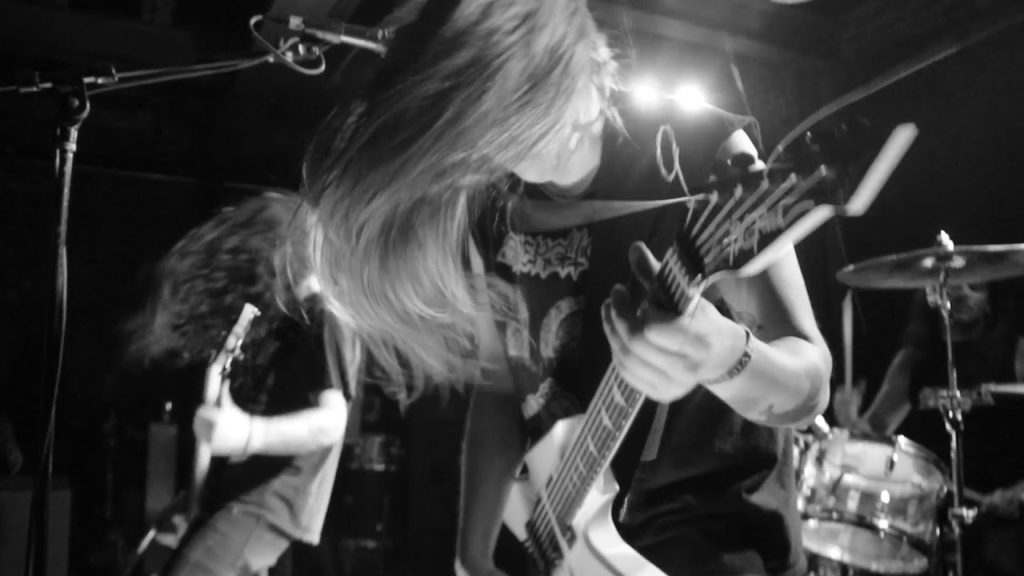 These thematic elements are less preconceptions than they are a miasmal after-effect of the band’s own musical exploration. “It starts with just the music.” says Bowman, offering some illumination on the band’s process. “Chase and I split the riffing duties pretty evenly, but Alex and Tony (and early on, Dan) also add major contributions. The songwriting process is collaborative, deliberate, and contemplative. It’s also painstakingly slow at times. But the end result is always worth it, to us. I wouldn’t really say songwriting is conceptually driven. That part usually comes naturally a little later on as the music develops.”

Perhaps this allowing the sound to dictate lyrical direction is part of why Mortiferum sounds so crushing. There is no pretense at trying to fit a mold, or satisfy anyone but themselves, and it is that selfish drive that is arguably the most pure in any artistic undertaking. 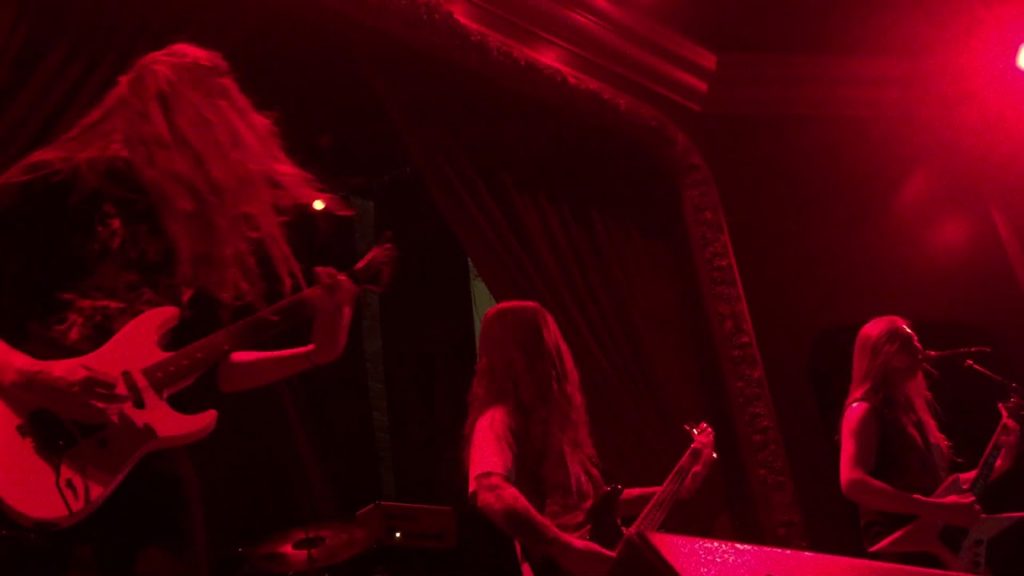 One of the key components to what makes Mortiferum one of the most promising acts on the rise is the group’s knife sharp utilization of the death doom genre’s defining aspects. The funereal lurch of low tempo expanses juxtaposed with the spasmic high energy of violent blasting sections culminates in a varied spectrum. “Slow parts of classic death metal songs can be extremely powerful. Take, “In The Grip Of Winter” by Autopsy for example. THAT SLOW SECTION IS SO FUCKING HEAVY!” Max muses, but as he speaks further on the band’s views regarding their style, it becomes clear that feeling and atmosphere were always the driving factor. It just so happens to fit into what we categorize as ‘death – doom’.

“There is a time and a place for speed and technicality (even for Mortiferum), but it’s important to let riffs breathe a bit and to create a more ominous feeling. Slower sections invoke a certain emotion that’s hard to put into words. Our music is supposed to invoke a feeling of darkness, anxiety, and dread. And while I LOVE blast beats (we try to use at least one in every song!), these emotions are best displayed in the slower sections.” 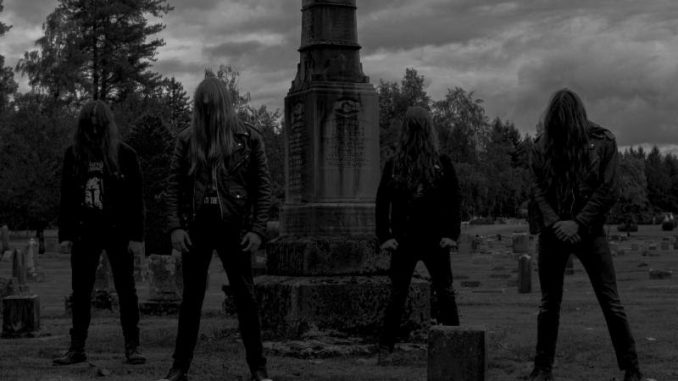 Though they follow their own creative whims, Mortiferum do not shy away from emulating the greats. Hearing the thousand pound impact of Altar Of Decay’s currently existing four tracks brings to mind the likes of Disembowelment and Incantation, among others, while never crossing into hack territory.
“Our music is embedded in a lot of traditional aspects of death metal and doom, but when writing music we try to make sure we aren’t being too predictable with arrangements and changes.” Bowmen explains. In this modern era of over-saturation in the way of music, to stand out is becoming only ever more challenging, and it seems that it is those bands that can both see and walk the line between the familiar and the original that come out on top.

“I’ve definitely noticed that a lot of newer bands experiment with similar things, and we definitely don’t want to sound like everyone else. That said, trying to sound totally “original” is close to impossible, and usually results in something weird. If people can hear our influences in our music, that’s not a bad thing to me.”

Having made their live debut in Vancouver last year, Mortiferum left a lasting impression that they were not going to be forgotten anytime soon. The band has undoubtedly stirred up much anticipation for their future, touring voraciously on their four track demo, alone. “While [touring is] not always easy for various reasons, we love it. It’s pretty simple – playing death metal live feels fucking good! In only 2 years of being a band, we’ve been lucky enough to tour with bands we love and can now call our friends, and in doing it this way, we have sort of set a precedent for ourselves when it comes to touring: We do it with people we like hanging out with, who inspire us musically. Fetid, Superstition, Spectral Voice, and Hyperdontia have made touring so far such a privilege. And there’s more to come.”

Mortiferum has recently been taken in by the underground metal powerhouse label, Profound Lore Records, that in and of itself is surely proof of the quality of the band’s upcoming full length debut. “The new record, Disgorged From Psychotic Depths is finished and being mastered. It comes out to just under 44 minutes. You can expect to hear more of what we did on the demo, but more atmosphere, heavier riffs, and more DEATH.”

One can only hope that we might get a taste of what Mortiferum has in store during their much anticipated set at Covenant Fest V.