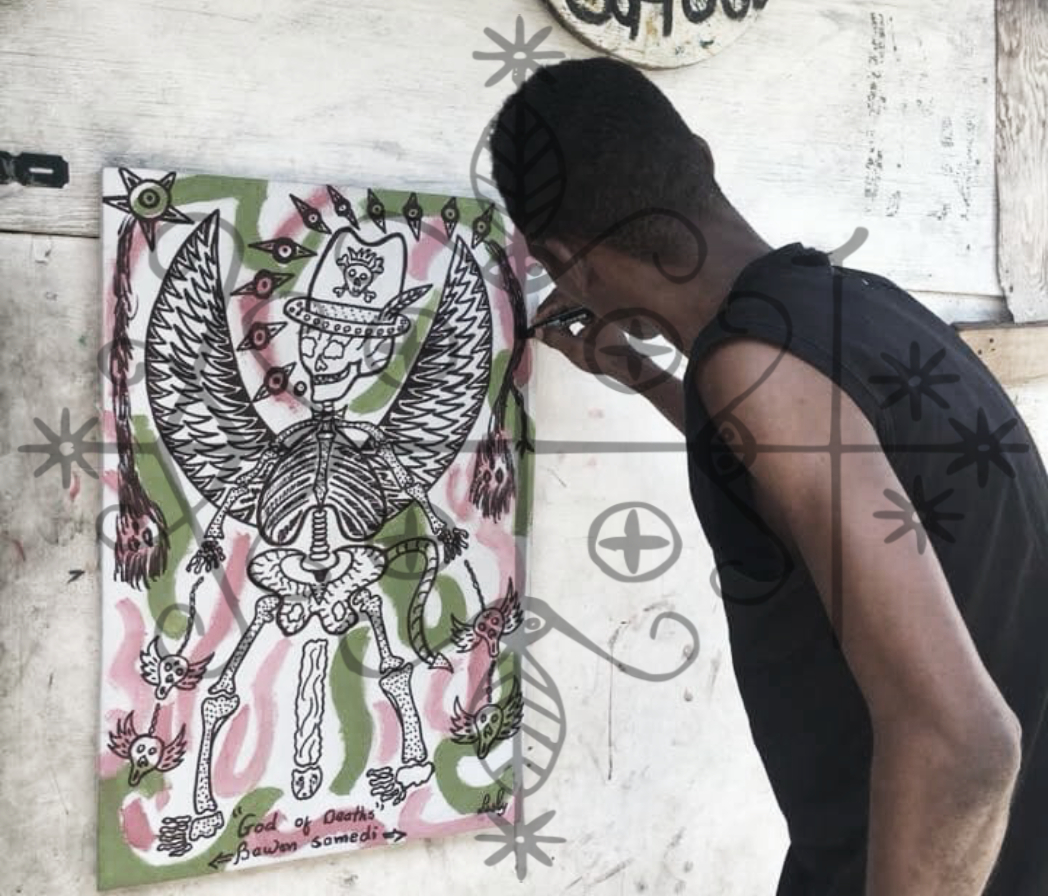 Lesly Pierre Paul was born in 1990 in Port-Au-Prince, Haiti. For a bit more than a decade, he has pursued the arts and carved out a name for himself as a prolific painter, focusing heavily on his motherland’s natural and spiritual traditions.

Covenant Magazine first came to know of Lesly through the writing and promotion of fellow Canadians, Anathema Publishing. We were not only struck by Lesly’s potent Voodoo artwork, but also by his philanthropic and humanitarian initiatives. In 2017, Lesly founded New Vision Art School in his home town of Port-Au-Prince. Lesly wanted to give back to his community and share his passion with children, not only for art, but for traditional Haitian Voodoo. Lesly has created a safe and spiritual environment for the children of his community to thrive, develop a connection to their lineage, and to water the seedlings for future artists to grow. 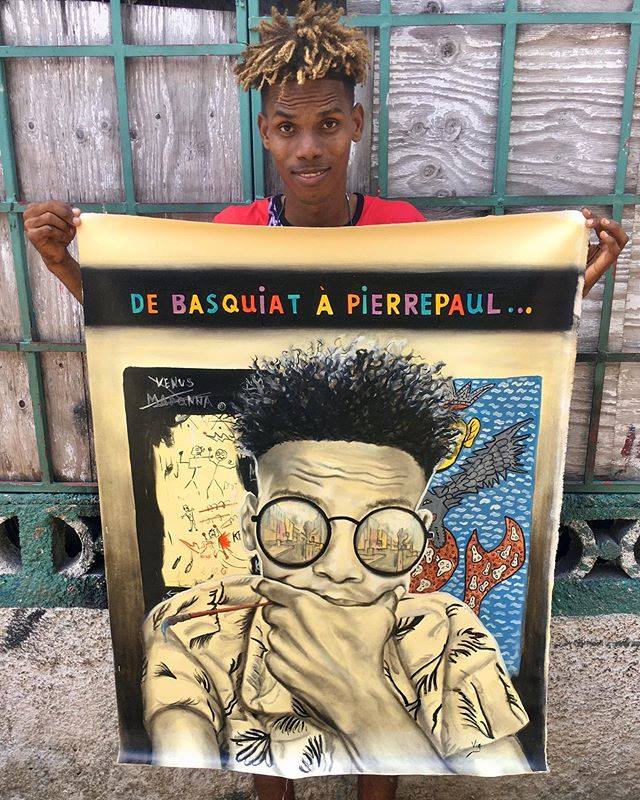 According to Mr. Pierre Paul, his upbringing is a long story. Living in a town where it’s unsurprisingly a bit difficult to survive, he gave all of his time to education as a child. By no means rich by birth, as a boy his parents taught him early about the priceless nature of generosity. This was the motivation needed to launch him into his studies, which he committed himself to every day for a better future in Haitian society.

At 19 years of age he began pursuing the arts, collaborating with others Haitian artists like Jean Muller Milord and Guerly Laurent. He tells us that they, “created sculptures together during this period culminating in the Ghetto Biennale in 2015. After meeting Craig Williams on Facebook in 2017, I decided to begin painting pieces inspired by Haitian Vodoun, Nature, and the Occult.”

“Working with Anathema publishing and Craig Williams is a blessing. I can’t thank the spirits enough for these connections and friendships. Surely the spirits are grateful for our connection as well!” 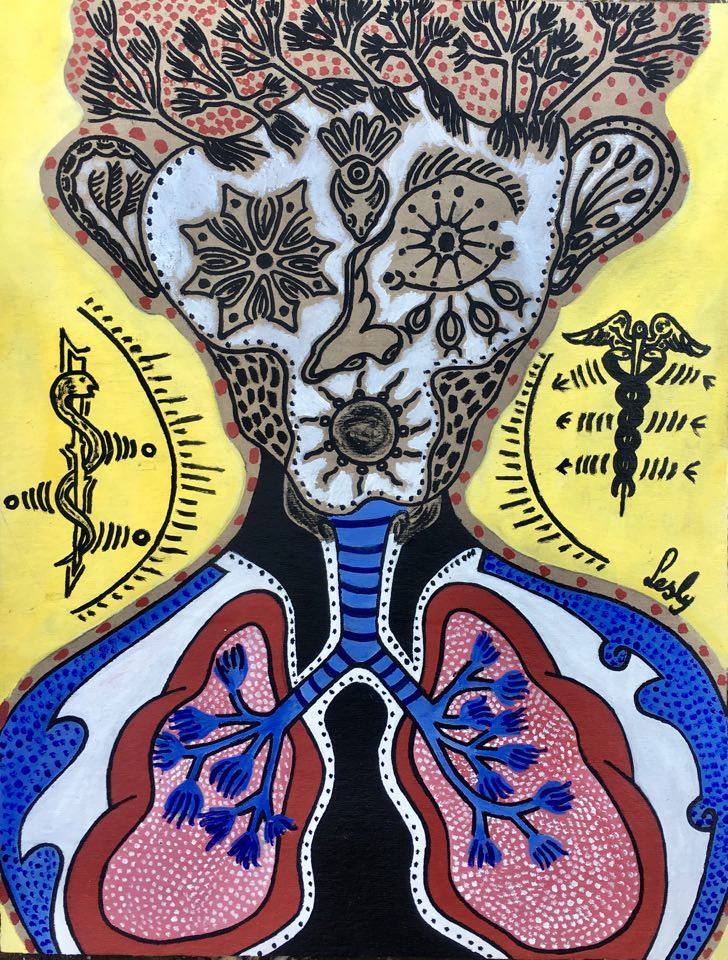 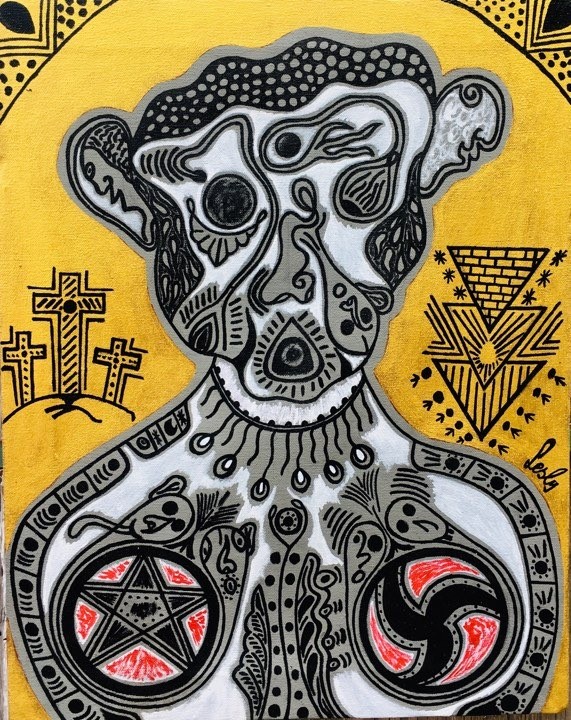 Without any formal education in the field of art, he discovered his ability to paint and draw solely through his own instruction. Through curiosity and determination, this passion lead to the formation of his own art school in Port-au-Prince, which he dubbed New Vision Art School.

As anyone can imagine, “it’s not easy to be an artist where I’m living,” Pierre Paul tells us. “But art has chosen me and it is how I support my community – especially those who are desperate and the local children who are so filled with frustration. Only art can heal them.” 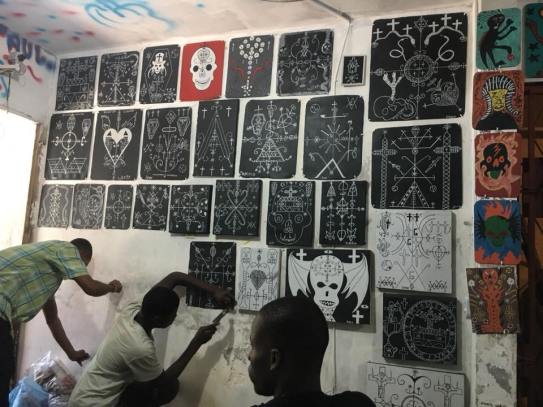 The steps from artistic awakening to philanthropy must have been multitudinous. We are curious to know the inspiration that went into the founding of New Vision and how such a powerful initiative has played out since its inception. Lesly is clear, “The inspiration came from spirits. That’s all I can say …”.

Lesly currently lives in a special Quarter of Art, but unfortunately the older artists from this community don’t support young artists. This is the major driving force that lead to his decision to open New Vision Art school. With the help of a great friend Riccardo Angelo from Australia, the school received art supplies and the first few purchases of the children’s paintings. The money from these purchases allow children to enjoy a better future, a good future. The cycle of community support between instructor and student is also ongoing we learn, “when I sell my paintings I buy works from students too. Now I have many, many friends who support New Vision [and] that’s a blessing for students and my community.”

But the artistic motivation is always clear: “Our inspiration source is Voodoo and Nature.” 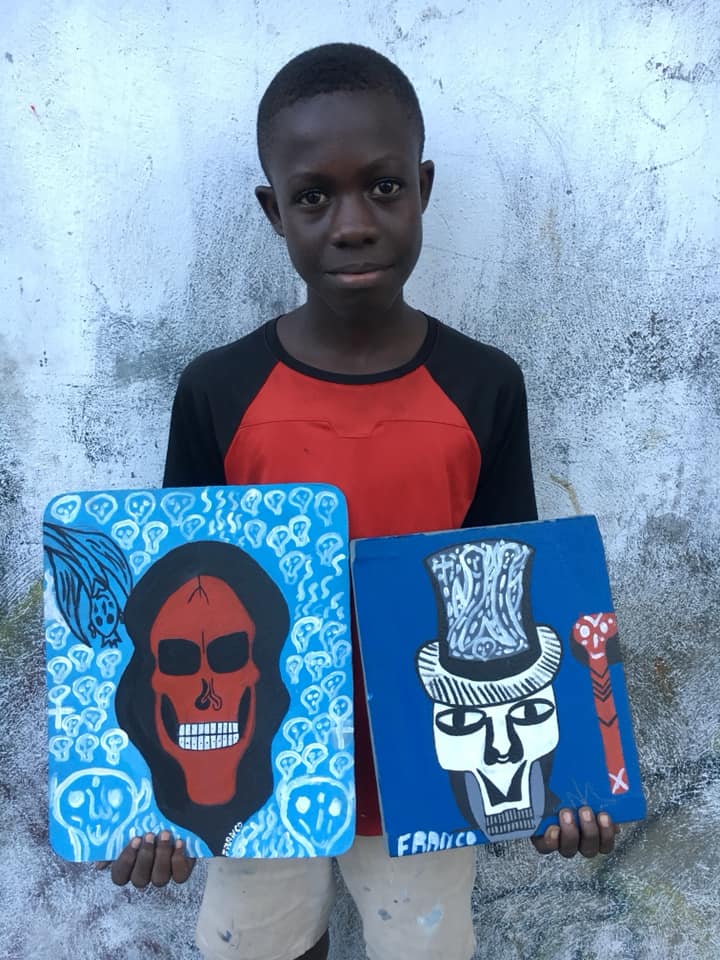 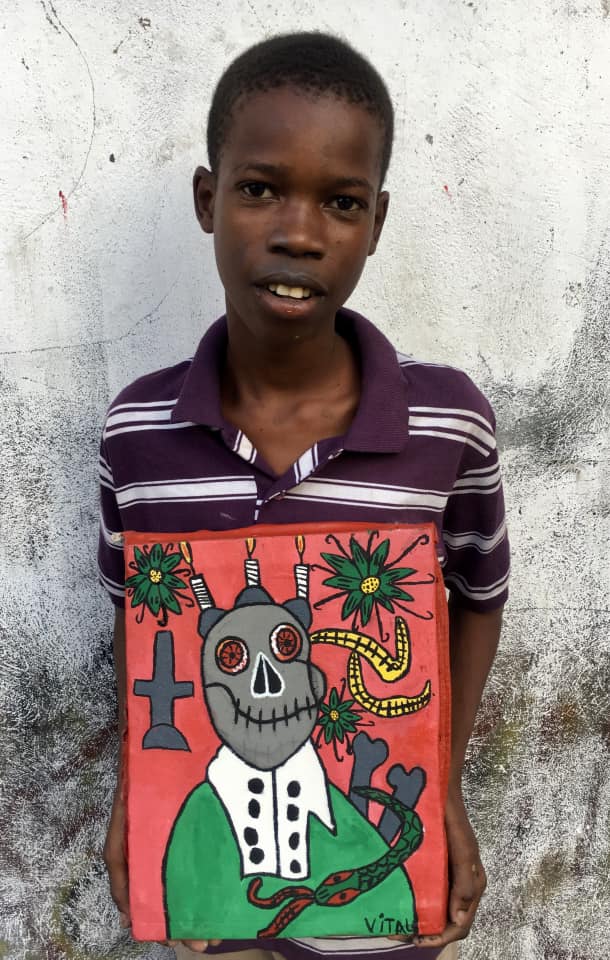 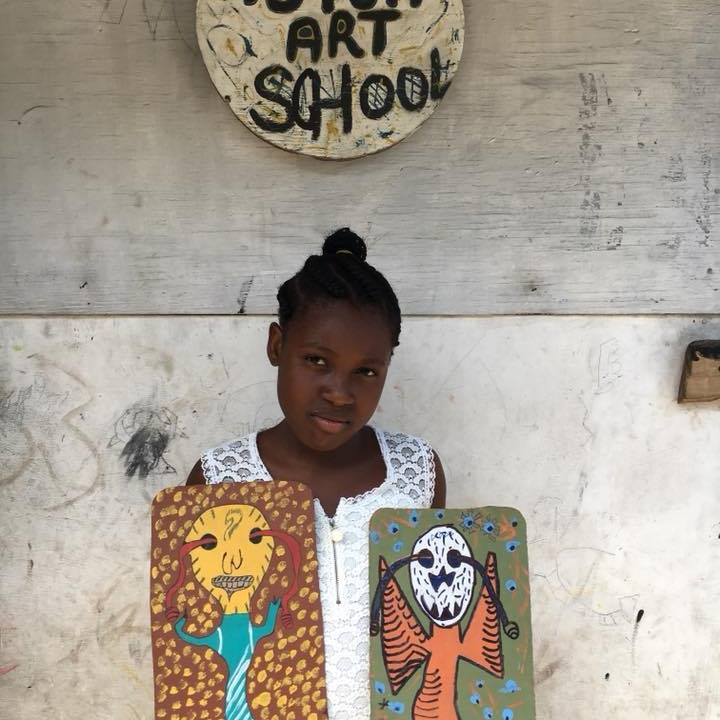 All art requires personal work, and Pierre Paul’s engagement with the world of Haitian Voodoo is direct. His art comes directly from Haiti itself and is drawn from the well of Haitian Vodoun, empowered by the symbols and forms of the Loa like Papa Legba and Baron Samedi. His engagement with his direct environment is inspiring. Often he will, “use the materials that are available in an area where resources are limited – such as cardboard and paper – unlike artists in other countries who have access to canvas and fine art supplies.” This need to create overrides all else and leads to a captivating blend of medium, form, and subject. 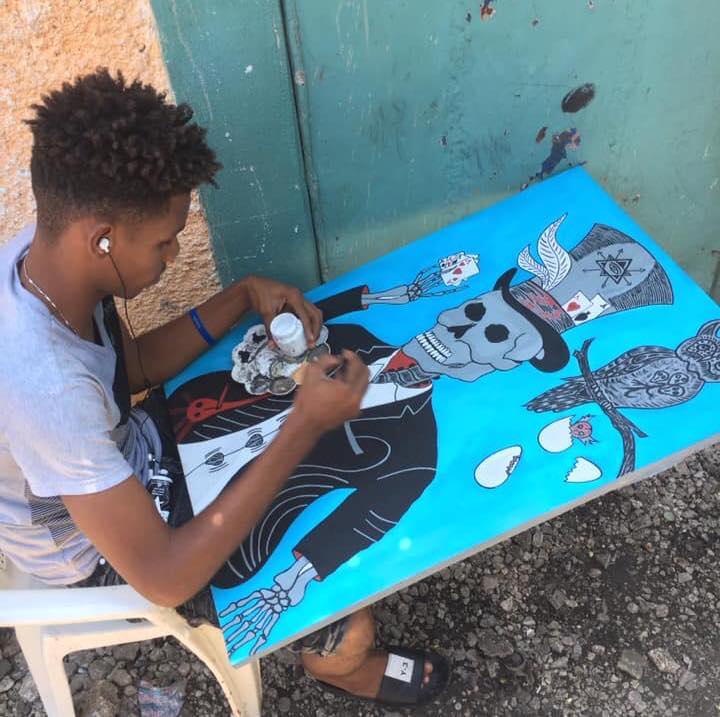 Perhaps the average reader may know one or two Haitian artists and perhaps not at all. This is an ideal opportunity to ask a contemporary artist working in the tradition to elucidate us and give us some direction towards Haitian artists that have directly influenced his art.

“I have been inspired by many Haitian artists – both known and unknown – you have probably never heard of Ernst Altidor, Erick Lafond, Joseph Stevenson, or Alexis Peterson – who have had a strong influence on my style. More well known Haitian artists that I admire are Franzt Zephirin, Mario Benjamin, Hector Hyppolite, and Stevenson Magloire. These artists all give me energy and help me refine my technique as I develop my own place in the art world.” 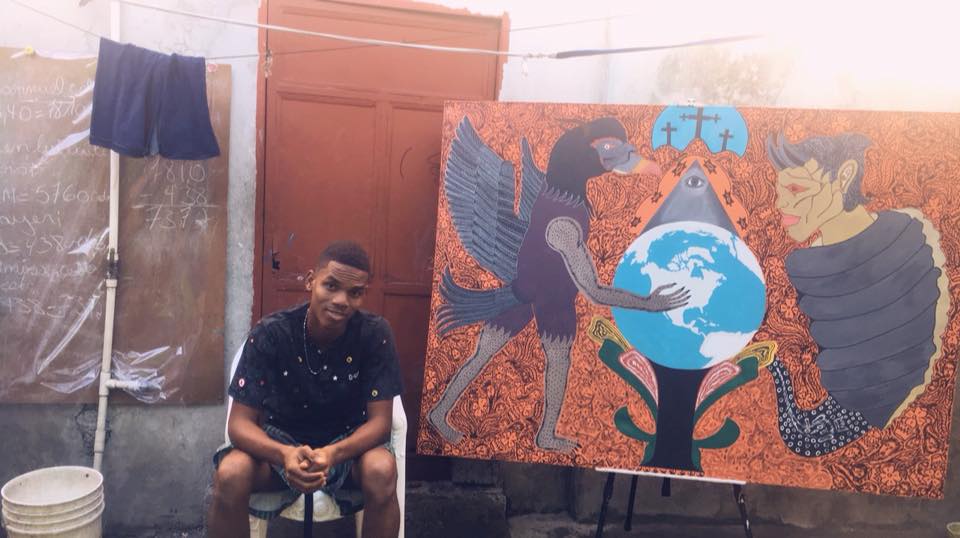 Artistic processes are as unique as the artists themselves. In such a unique environment, propelled by a force few of us understand, we long to know how he divines his creative approach. Is symbolism the first priority or flow of artistic expression? Is it more detail oriented or intuitive?

“When I approach a painting for the Loa my first priority is to allow the flow of artistic expression.” But there’s even more to it. When Lesly sits down to begin a painting, it’s essential that he allow himself to “feel the Spirits talk – this is where the symbolism comes from. I consider each painting as a part of myself. Each one expressing inspirations given by the Spirits.” 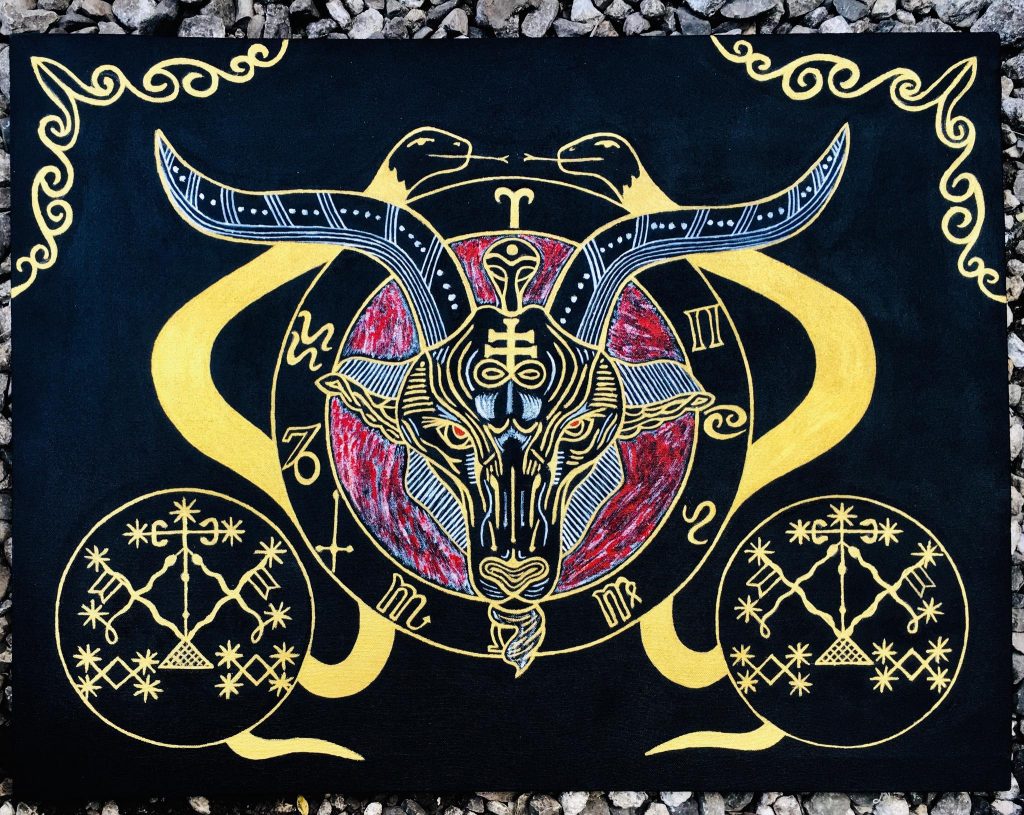 In fact, to our delight, he regales us with a story about the symbol in the painting above to further explain how he crafts his work. An ode to Spirit and a piece of himself all at once:

“Dambala is one of the most important of all the loa, Damballa is believed to be the Sky Father and the primordial creator of all life. He rules the mind, intellect, and cosmic equilibrium. White rum is sacred to him. Damballa, as the serpent spirit and The Great Master, created the cosmos by using his 7,000 coils to form the stars and the planets in the heavens and to shape the hills and valleys on earth. By shedding the serpent skin, Damballa created all the waters on the earth.”

We ask him to reveal how the spread of his artwork is allowing the spiritual voices of Haiti to reach the outside world who may only have a cursory understanding of terms like “voodoo” or “voudon”. He explains that his artwork is a part of, “the growing fascination that outsiders have in Haitian Voudon”. Artwork like his and his students’, “makes it possible [for] strangers to learn about more about Haitian spirituality and work with the Loa.” Without hesitating for a moment, he reveals that “Legba can open the Doorways for all strangers who would like to learn and serve the Loa in their temple.”

With a final piece of wisdom, he reveals the crux of the Haitian mindset that applies far beyond just artwork: “The spirits are around us, so ignoring them is like ignoring your real life. They’re our Guide and Protector.” 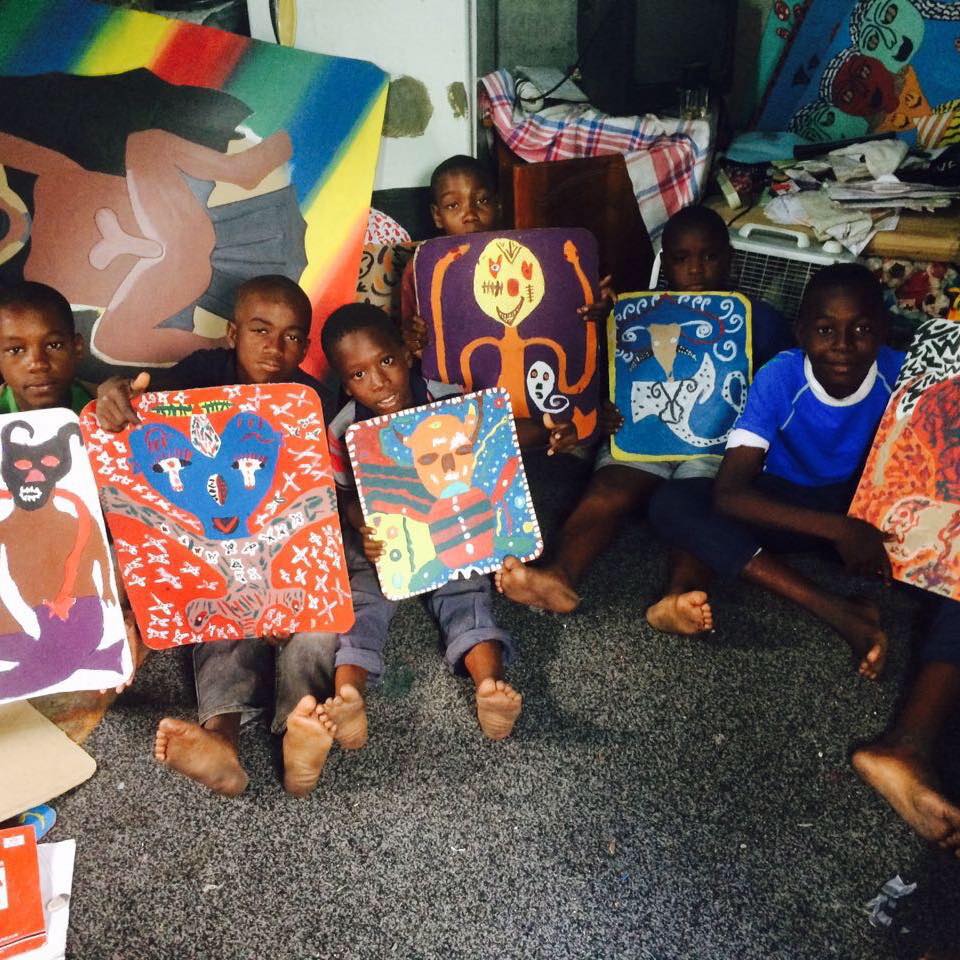