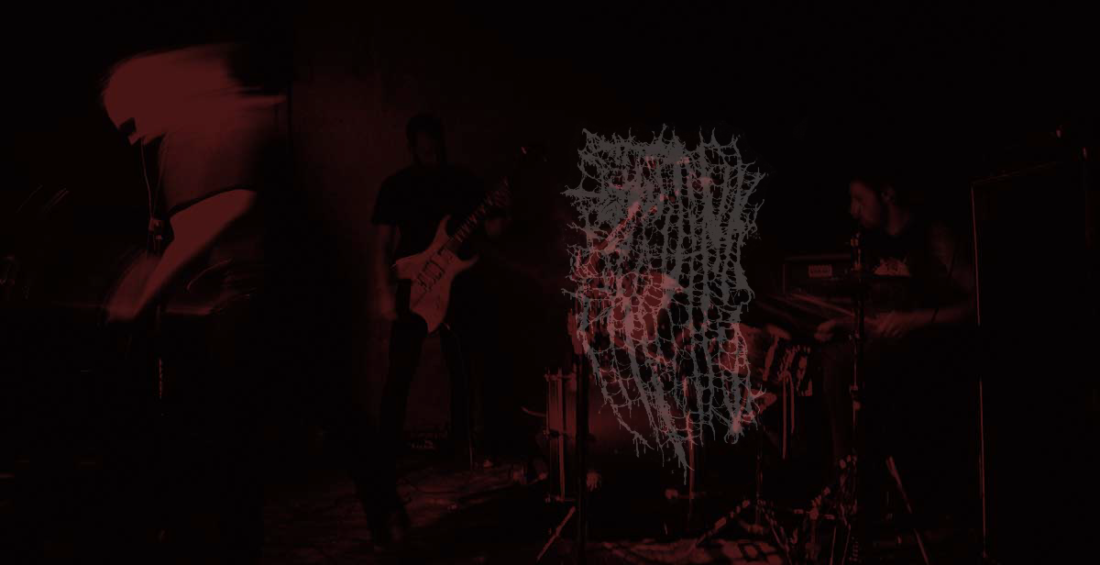 Modern death metal has gone through yet another resurgence of heightened invigoration in the last few years, with a particular concentration of perpetuating and reimagining ‘old school’ elements, and to magnificent effect. When death metal fans look back on these years, the likes of Necrot, Superstition, and Blood Incantation will likely ring true, but as this tempest of content rages, there are those bands who dirge in the abyssal regions of taste and experimentation, and who shunt away the spotlight in pursuit of the depths that creation can reach.

One year following the release of their debut full length, Permanent Destitution, Seattle sound violators, Hissing remain one of the most subversive and flat out difficult acts in modern death metal. Emulating the anxiety – inducing nature of a Pollock painting, smearing and splattering with raw waste in place of paint, it isn’t all that surprising that the band haven’t been as concentrated on by the masses as their label and genre counterparts have been.

And that is entirely the point.

To be honest, the music was consciously written to be as unpleasant as possible. – Z, Hissing bassist/vocalist

“It’s actively antisocial. Our guiding impulse was climax denial, I suppose. If something ever felt too satisfying or resolved too well, we would go back and “fuck it up”. We would add or remove measures or beats to make things more frustrating, but if it felt too “prog”, we would add something stupid and sloppy after to deny it a “technical” label. We wrote parts that were immensely difficult to play and we had parts that were frustratingly dumb and repetitive.” 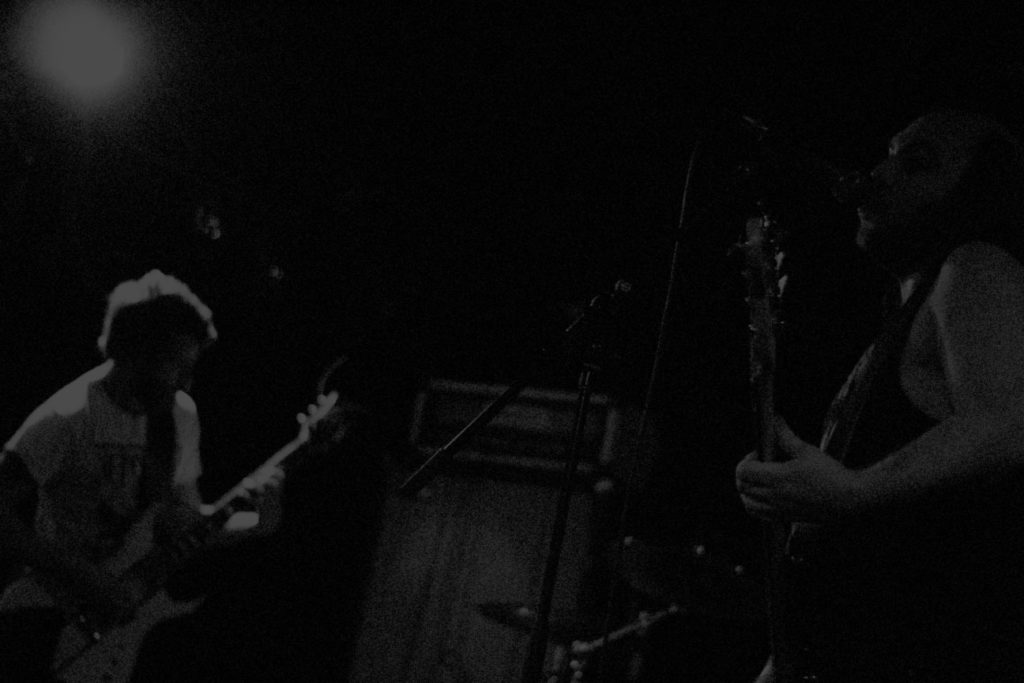 Upon first listening to Hissing, Permanent Destitution in particular, the listener is placed in a position of abject discomfort. Nothing feels right. Constant shifts in tempo and chord progressions pull at them from every direction like a wanting crowd, while all the while they struggle to maintain their footing on a ground coated in filthy production. But given Z’s comments, the murk becomes a concentrated ray of intention and inverse vision. Much like the Dada movement of the early 20th century, in which creatives strove to avoid the shackles of sense and structure as a mode of defiance and exercising pent up rage, Hissing have built on a foundation of punishment and cruel deprivation.

“In post-production we added in additional harsh sounds at particular frequencies if a part felt too groovy after we tracked it… I don’t even know why we did some of the things we did, they just felt right.” Z adds further. “The entire project was driven by disdain and malice towards our listeners. Extreme metal is and should always be an inherently abrasive medium.”

Running parallel with their approach to sound, Hissing’s visual and lyrical representation is a conscious step away from what is commonly associated with extreme metal. The name, Permanent Destitution, alone speaks volumes to this fact. Rather than painted visuals of horror phantasm or the systematic narration of a body’s colorful violation, Z and his bandmates aim to conjure an aura of panic and trauma via alternate arteries of inspiration. 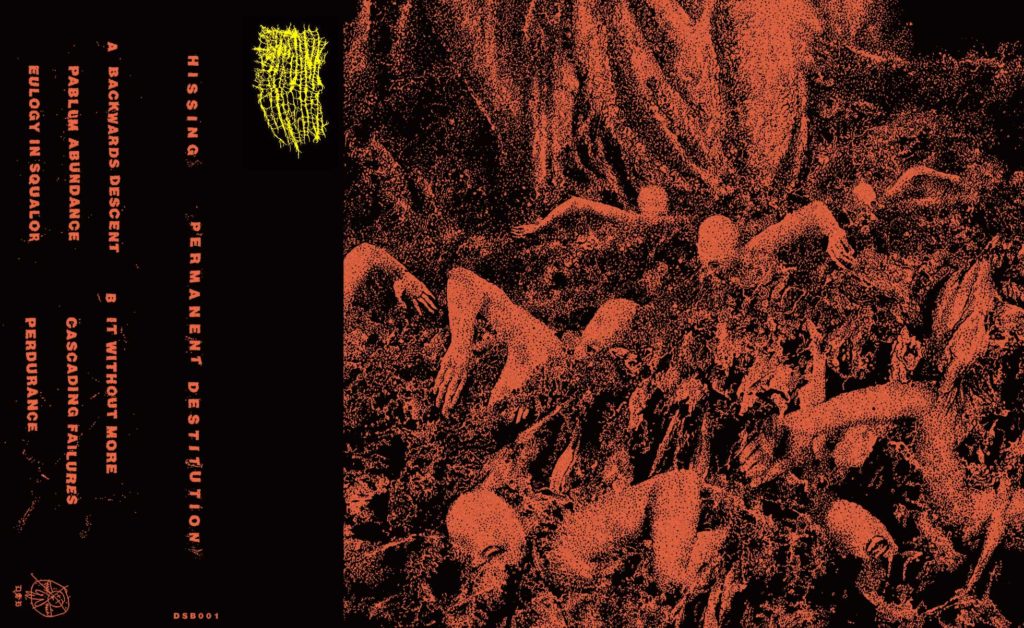 “The word “destitution” can mean a lot of things, and it isn’t meant to mean one thing here. The album deals with various manifestations of insanity, abjection, failure, things that I think are not only integral to life but are perhaps it’s only actively defining characteristics. Starting with the macrocosm of the failure of history and narrowing scope to the microcosm of the slow disintegration of the human mind subjected to the trauma of existence. A reversed Maslow hierarchy, perhaps. Humans fail to remember history and repeat the same wars and genocides. Humans love to distract themselves with garbage pop media spoonfed to them. Humans create great mountains of garbage. Humans act on their base desires without understanding why. Humans abuse the power they’re given without consequence. And in the end, human minds degrade and lose touch with reality and it was all for nothing. The more you understand the way human civilization has organized itself the more you find just how cold and ugly it is from top to bottom and the inevitable conclusion becomes that we are, in fact, in Hell.”

In his phrasing alone, Z reflects the spirit of Hissing: one of vitriol and loathing for the human being and/or being human. It is a conflict only as old as its sole combatants, and especially in times such as ours, Hissing’s well of inspiration seems limitless.

“The miasma of the human hive in the city we live in. Rather than active human malice and cruelty, I think we’re more interested in the dull violence of tedium, the slow corrosive way that modern life saps your passion and vitality day by day and we let it happen.” Z states, immediately bringing to mind the nature of our current, social media, mass marketed, politically correct and thought policed society. 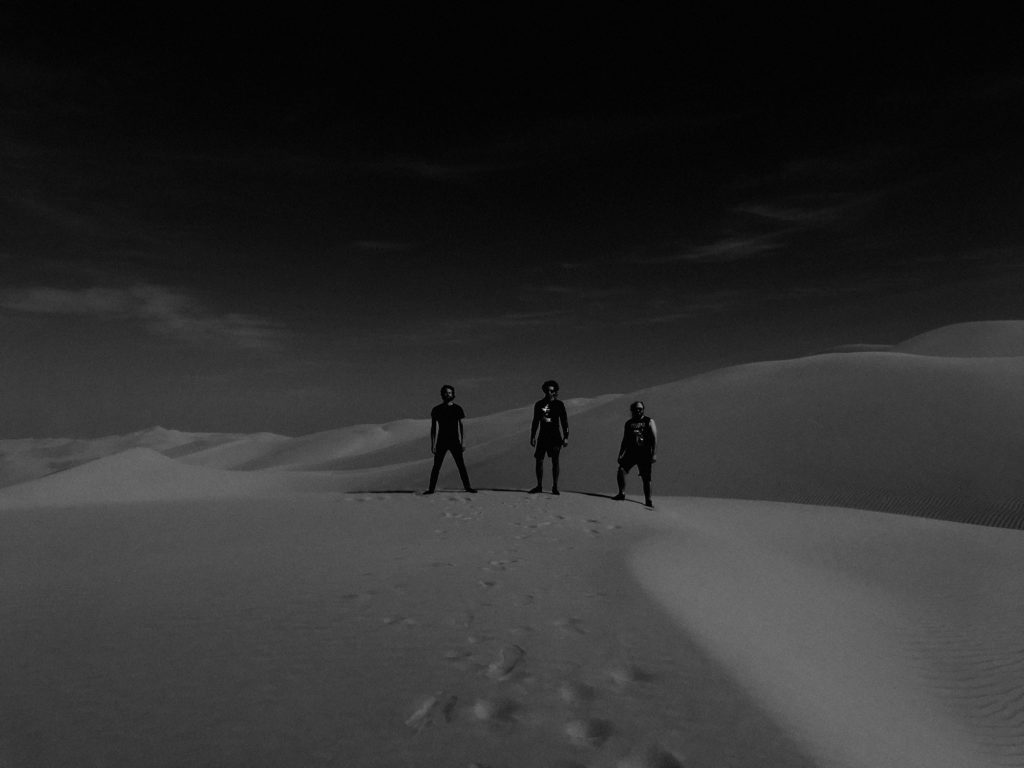 “If death metal is about horror, in my mind there’s nothing more horrifying than simply being alive. Beckett, Bernhard, and Céline are some reference points for styles of expression. One of the songs on the record was deeply inspired by my brief obsession with Andrea Dworkin’s “Intercourse” – a truly bleak take on human desire. Sometimes I take lyrical fragments from lucid dreams and misheard sentence fragments. The subconscious is powerful and sometimes reveals the things we don’t dare think in our waking lives. I firmly believe that every human around me is silently screaming in buried psychic rage and our true selves come out when we find these moments of lost control. “Sanity” is a prison we have built around ourselves to maintain what we call civilization, where a few rich sociopaths profit off of misery and genocide. I don’t think we hold any naïve hope for a better world. Our music and lyrics are simply a natural reaction to the one we have been thrust into.”

So soon after the release of Permanent Destitution, Hissing stand on the verge of yet another release that, albeit of a smaller scale, represents a considerable turn (or return?) into the realm of industrial noise in Burning Door, which drops on November 22nd, on Utech Records.

“[Burning Door is] quite different, in that it was a much more consciously anti-musical project than before.” says Z when asked for some updates on the new EP. “We had ideas and reference points for what we would do, but it was assembled slowly using several months’ worth of improvisations and experiments in sound, as well as incorporating sound fragments leftover from the recording of Permanent Destitution. In my mind it’s more of a tangent than a continuation of the narrative of Permanent Destitution. I would urge uninitiated listeners to take it in as less a musical narrative as with our record, and more a psychedelic experience. I realize how pretentious this sounds, but the point is, it’s not a structured musical statement and if you go in expecting that you’re going to be angry at us and write pedantic, whining reviews on the internet.” 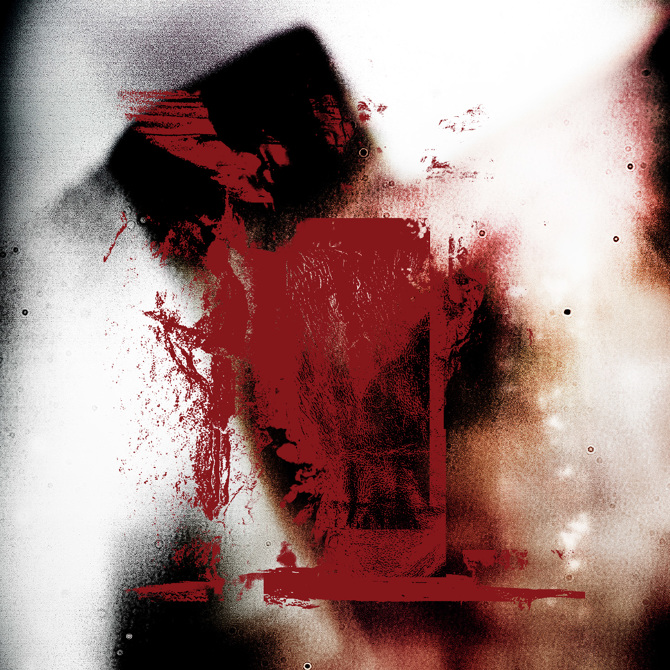 It’s sad that such a disclaimer is so necessary nowadays.

While Burning Door is a deliberate departure from the full length, the industrial realm is in fact rooted deep in Hissing’s origins.

“Two of us met at a Morbid Angel show through mutual friends and discussed wanting to start a project that ideally would have some longevity and potential to explore a variety of things that we were interested in. We initially were writing sort of pained, dirgey stuff with a drum machine in the style of Godflesh but found ourselves lacking the momentum we wanted so we added a drummer and suddenly everything became faster, more chaotic…[We] have been making noise music for years, although I only recently started actually playing it live and releasing it, partially because I used to live in a small town where no one cared and now live in a city where a few people care. Noise music (in the broadest sense) has influenced and been a part of every project I’ve been involved with, even my shitty high school grindcore bands. Rock music has always bored me, I’ve learned to enjoy “classic” rock and metal bands in recent years but for the longest time I disavowed anything I found too cathartic. No pain, no gain.”

Z went on to divulge his own feelings of appreciation for the less corporeal modes of sonic artistry:

“Improvised noise music can elicit some of the most pure, exhilarating audio stimulation if done right. There’s a kinship between noise acts like Incapacitants and jazz, where you’re creating something constantly unexpected, and your brain is being forced to try to make sense of something when it is being fed only disconnected scraps of rhythm, narrative, meaning. When you have three or four different layers of this musical anti-narrative happening at the same time, the result is overwhelming and powerful, like staring off a cliff into the ocean. There’s a project called Mastery from San Francisco that I think perfectly translates this dialogue between randomness and order into black metal form. Conversely, true industrial music emphasizes the machinic through endless repetition, pounding a single rhythm into your skull until it becomes all-consuming. Instead of the otherworldly, it creates anxiety, the existential misery of reality. Swans’ “Greed” – particularly the song Bastard (Time is Money) – has been a longtime influence and example of this.

“Hissing exists somewhere in a liminal space between these two ideas, the sublime chaos of improvisation and the ugliness and misery of repetition, vacillating in and out as needed.”

Going off of the topic of Hissing’s sense of belonging, when asked where he thought of the band’s existence within the current metal scene, even over email, Z’s shrug and sigh was almost tangibly evident.

“People don’t seem to know what to do with us. Either they get it or they don’t. Some seem to think we’re “hipsters” intruding on the war metal scene or whatever. I’ve heard that we’re too “artsy”. I don’t know what to make of all this, and the older I get the less I care. There is a small contingent of similarly unorthodox black/death bands like Suffering Hour and Succumb in the States that I’ve been discovering over the years and making friends with because I imagine they get the same stupid treatment. But honestly, the bottom line is: we’re not here to recycle Obituary riffs for you and sell beer. If you don’t like it, then fuck off.”