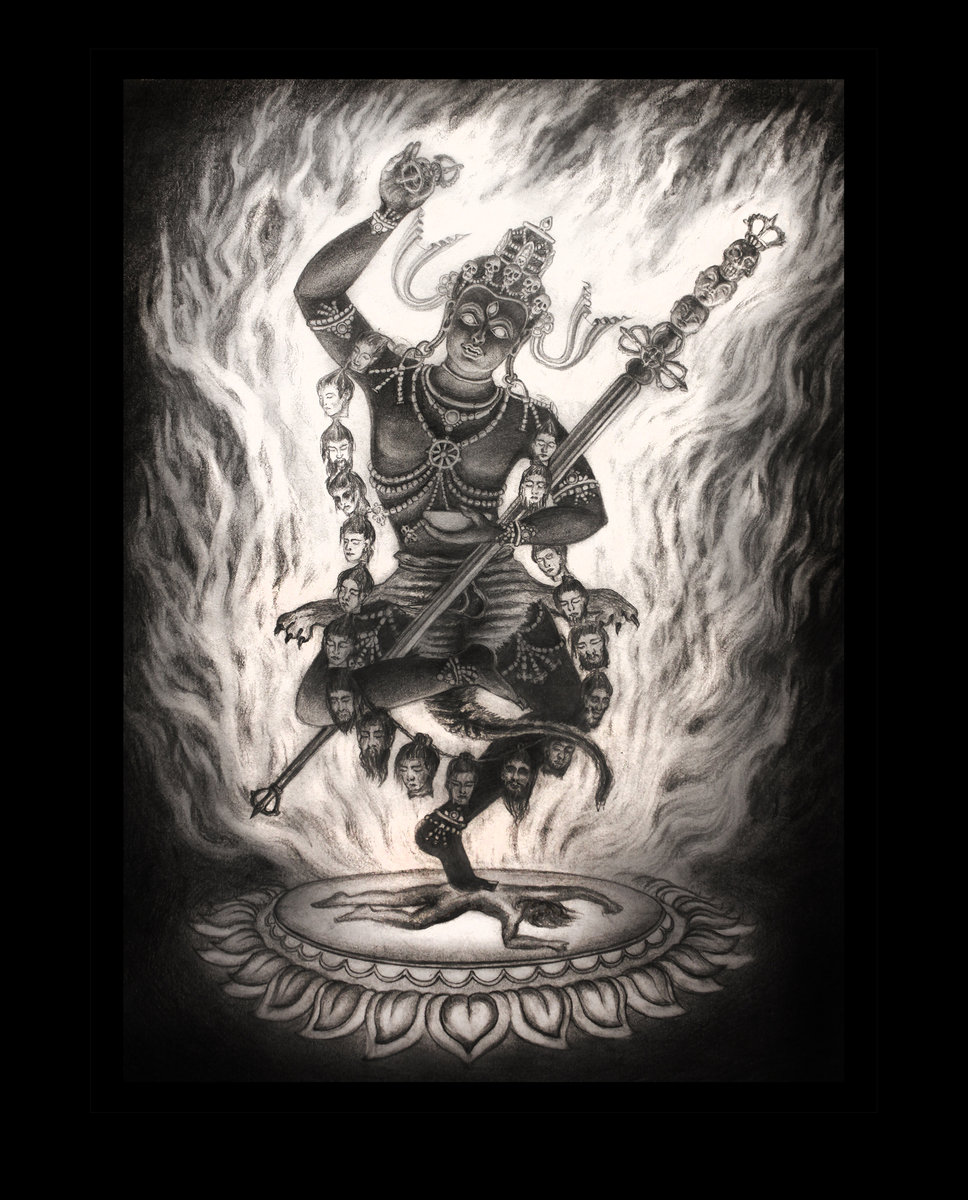 On this particularly auspicious day, Covenant presents the yet unknown and shadowy entity known as Heruka. While grounded in Kathmandu, Nepal, the project reaches far beyond the limits of the material plane striving towards the greater work at hand. Taking inspiration from the ancient Indo-Tibetan Vajrayāna tradition, Heruka’s demo entitled, བརྟུལ་ཞུགས་སྤྱོད་པ་ (Tulzhug Chöpa), is an ode to the realized tāntrik sages of this specific sacred landscape, whose wisdom minds dwell in the indivisibility of bliss and emptiness.

While seemingly brief, the demo itself contains a potency rarely experienced in wholly realized albums and musical projects all together. At only two tracks, the first “དུས་གསུམ་སངས་ (Dusum Sangye)”, is a ritual ambient hymn sung in the Tibetan language, paying homage to Guru Padmasambhava, an 8th century Indian Mahāsiddha (Great Adept), who is credited with establishing Vajrayāna in Tibet. The second, “བརྟུལ་ཞུགས་སྤྱོད་པ་ (Tulzhug Chöpa)”, is a death/doom and ritual ambient track, which pays homage to the inner and secret aspects of the philosophy, path, unconventional behaviour, and appearance of a realized tāntrik yogin. The track is sung in a mix of Sanskrit, English and Tibetan languages, and it utilizes actual tāntrik ritual implements such as a damaru (hand-held drum), drilbu (ritual bell) and pre-recorded samples of rolmo (‘fierce’ cymbal) and (dung chen) trumpet, which are generally used by practitioners during tāntrik ceremonies in Vajrayāna monasteries or at hermitages. 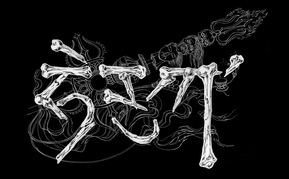 First initiated over two years ago, the project’s research work involved an in-depth study of the existing Vajrayāna tradition in the Tibetan lineages that currently thrive in India and Nepal along with a sincere inquiry in its Indic roots. The research work behind the lyrics and ideological concept behind Heruka included a thorough study of different complex aspects of the tradition’s philosophy and soteriology, which was further strengthened after receiving transmissions and teachings from various contemporary Vajrayāna masters hailing from India, Tibet and Bhutan who have meticulously preserved and mastered several outer, inner and secret aspects of the tāntrik path. 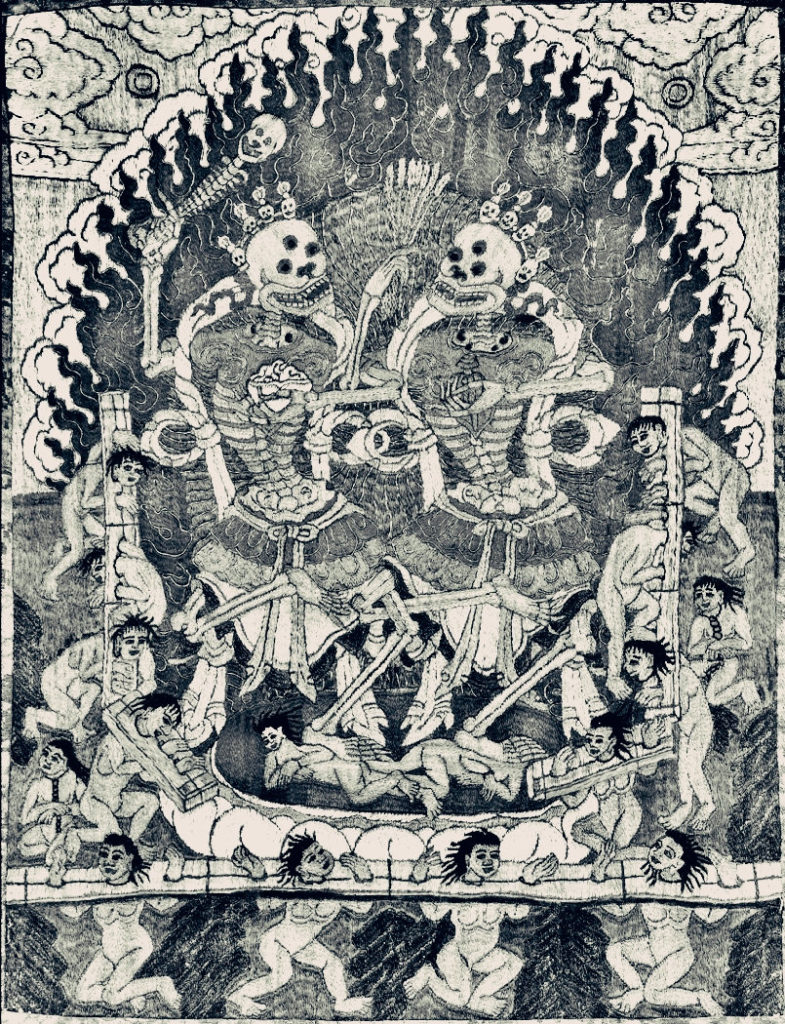 We spoke with the figure behind the voice, Padma Vajra. Previously known for his advisory role and vocal contribution to Cult of Fire‘s मृत्यु का तापसी अनुध्यान (Ascetic Meditation of Death) album, the vocalist has since fully immersed himself in research and exploration of the enigmatic Tibetan Vajrayāna tradition and its Indian antecedents.

In the face of flippant misuse of these wisdom traditions in so much modern extreme metal, Padma decided action was needed. “During recent years, it has become somewhat of a trend in the underground metal scene, particularly black metal, to flirt with Eastern mysticism, but unfortunately most acts lack a proper exposure and understanding of the philosophy, soteriology, and symbolism of the myriad traditions, practices and deities that exist in our part of the world,” he states. Padma Vajra is no new comer to metal music nor the spiritual currents of which he delves, he clarifies that “as a student of the Vajrayāna tradition of Tibet, and as someone truly invested in the underground music scene, I felt an urge to create an honest and true-to-the-roots musical project to pay homage to the spirit of the Tantric Buddhist tradition for kindred spirits who are equally interested in the mystical and the obscure.”

Despite its brevity, བརྟུལ་ཞུགས་སྤྱོད་པ་ (Tulzhug Chöpa) represents the culmination of years of research, dedication, and hard work. “A lot of work went behind the research and understanding required for a project dealing with the inner aspects of Vajrayāna,” he says. “It involved visiting Tantric temples, monasteries and power places, understanding Tibetan ritual, academic research, and most importantly meeting authentic Vajrayāna masters in India and Nepal and receiving their precious teachings and blessings.” Padma tells us that the influence of these teachings are leveraged in Heruka’s music to “pay homage to the ‘male’ aspect of Vajrayāna tradition and especially to Guru Padmasambhava, the 8th century Indian Tantric master, who established Vajrayāna in Tibet.” In fact, even this exact unveiling is calculated to infuse even greater potency, as he explains, “the digital release of the demo also coincides with the 10th day of the current Tibetan month, as per its lunar calendar. This date is very special as its connected with Guru Padmasambhava, commonly known as Guru Rinpoche in Tibet and in the Himalayan tradition in general, and broadly the male aspect of Vajrayāna tantra.”

Soon to be released into physical format through SERPENTS HEAD REPRISAL on tape cassette.

The cover art was drawn by Visionis Phosphorescent, paying ode to the Indian style of Vajrayāna sculpture, which was prevalant in the epochal Pala Empire (8th-12th centuries). Vocals and ambient tracks/recording in conjunction with SISTER