Artists, theologians and philosophers have contemplated belief and ideology since time immemorial. These regimes of truth have been painted for us in many colours but, ideological or spiritual, all ultimately come back with the same motive – domination of the individual. Absolving us of personal responsibility through fate, diminishing the range of our free will through doctrine, eminence through order.

New Zealand’s Heresiarch explores a chaos world devoid of these bodiless structures, where hope is rejected and the divine is meaningless. “Our scenarios are set in the fray of a power vacuum, amongst the twilight of beliefs, faiths and philosophies which have been made redundant. In their wake a new path is forged, detached from the aforementioned. It is a world of struggle, chaos and lawlessness where force and death reign supreme.” tells founding member and vocalist N.H. “It is situational to a world where the sacred cows have been put to pasture, so to speak. The twilight referenced reduces us to instinctual, animal survival from which an intangible, conquering way emerges as a consequence to this. There is no name or identifying tenets for this other than power itself. As it is far removed and has not yet occurred, it isn’t explored or described further.”

Heresiarch’s vision has honed since their first releases in 2011, a demo and EP (Obsecrating the Global Holocaust and Hammer of Intransigence, respectively). In these early days the annihilation of the gods and the rejection of hope and belief were already dominant themes in their work, drawing from concepts such as Ragnarok and over time fleshing them out further into their own narrative world on later works Wælwulf and the cyclopean sound of their 2017 full-length Death Ordinance. “There’s a continuation throughout which metamorphosises with each release – Wælwulf and Death Ordinance are set 1000 years apart. ‘Lupine Epoch’ references some of the earlier themes but is more solidified in the identity we have forged, which was built upon earlier Heresiarch narratives. Heresiarch means ‘a founder of heresy’ and is reflected through our music, lyrics and purpose. The death and conquest of gods within physical and metaphorical forms is a statement of absolute power. This conquest and murder of gods was built out and emphasised from our relatively primitive foundation, particularly with Wælwulf.”

“There are themes in our music relating to the conflict and balance of individual experience against the wider macrocosm,.” says N.H. “Our most recently released track ‘Dread Prophecy’, is a scenario where two adversaries fight to the death whilst the sun implodes. The outcome is futile but their action and conflict is the paramount objective and central focus. The defiance and conquest of faith, destiny, hope and belief itself is a part of this balance and by extension, struggle. Those phenomena mentioned are viewed as weapons of manipulation and control used against the individual, recurrent throughout history in numerous manifestations, environments and methodologies. Zealotry and wilful ignorance lauded as virtue aren’t exclusive to spiritual realms and are viewed as symptoms rather than the cause. Whether through doctrine, organised religion or other mass movements, people are validated and encouraged to seek refuge from their own limitations. ”

Throughout this time, Heresiarch has morphed slowly into the creature that it is today, under the guidance of N.H., the remaining founding member. “Though I consider the band as an entity outside of myself, it has been under my direction with contributions from key collaborators since formation,” he says. “Throughout, members have come from a range of personalities, backgrounds and perspectives working towards the common purpose and vision of the band. Line-up changes become less of a concern as this vision and identity is further established. Whilst ideas, methods and execution may change, consistency and honesty in the approach is most important. Early on, our music was inspired by the bands we drew immediate influence from, esoteric topics, warfare, mythos and the recurrence of conflict throughout history. Seeing and drawing parallels between those topics built the foundation of our themes which were documented from a cold and detached perspective, presented as timeless and universal, occurring throughout existence and to continue once we cease to exist. Outside sources became less important as the identity and purpose of Heresiarch is solidified and becomes self-propagating.” 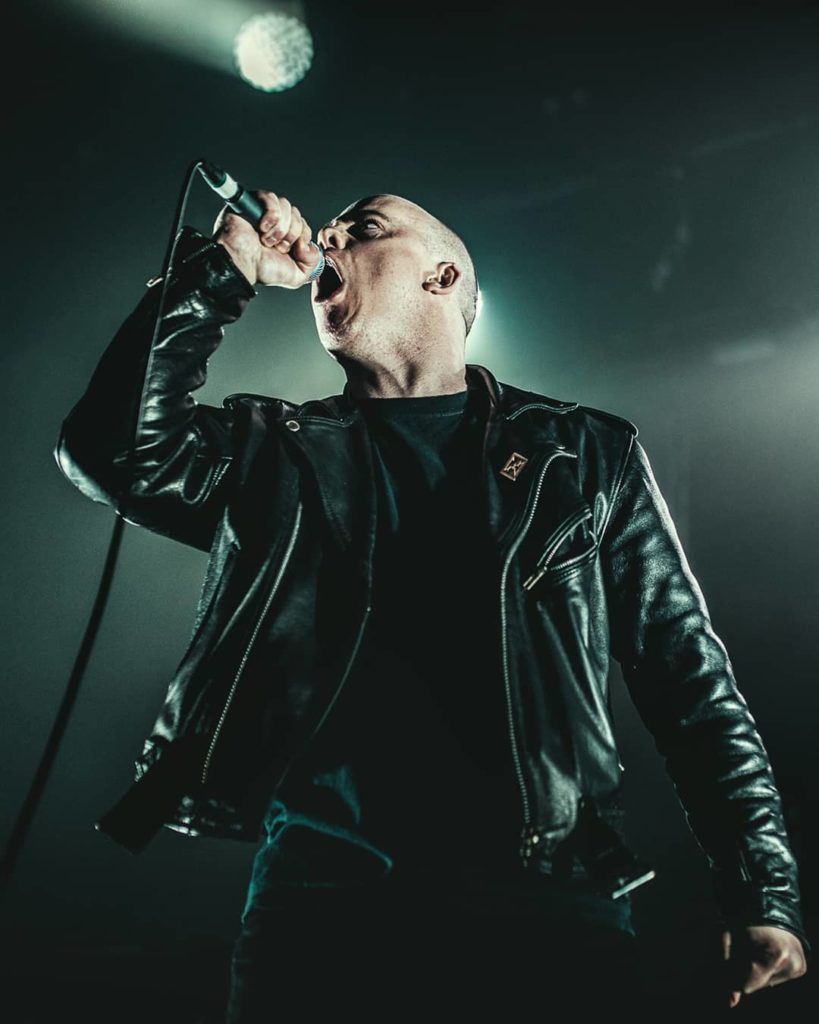 “Self-evolution is a part of the journey. Whilst having my own principles, goals and motivations, many of my perspectives and outlooks have changed throughout the years. Continued challenges, trials and evaluation bring about purposeful change and improvement. Heresiarch was my first “proper” band, founded in my late teens so naturally there will be some growth and discovery, the last 5 years have been particularly significant in terms of this.”

He continues, “The above is applicable to the creative process as well as individual outlets. The ability to self-assess, critique and identify ways to improve is an important aspect of the band. This is paramount to the creative process, one of the few areas where an individual can truly have some semblance of control over their lives. With that, Heresiarch has continued to evolve with different iterations of members, collaborators and new objectives. To “settle” on our musical output or fall into the trap of absolutist belief, submission and obedience to scenes, ideologues and dogma would be the death of self-growth, stagnating creativity and contradicting the purpose of the band itself.”

Heresiarch’s music is reflective of their thematic universe, titanic blackened death metal bedlam that takes you into a desperate and irredeemable world. Their newest single, “Dread Prophecy” was released through Indian label Cyclopean Eye Productions on Scorn Coalescence to be released in late September by Dark Descent on LP, a vicious four-way split alongside Sri Lanka’s Genocide Shrines and Serpents Athirst as well as NZ compatriots Trepanation. This collaborative effort was conceived on a visit to Sri Lanka and took years to come to fruition. 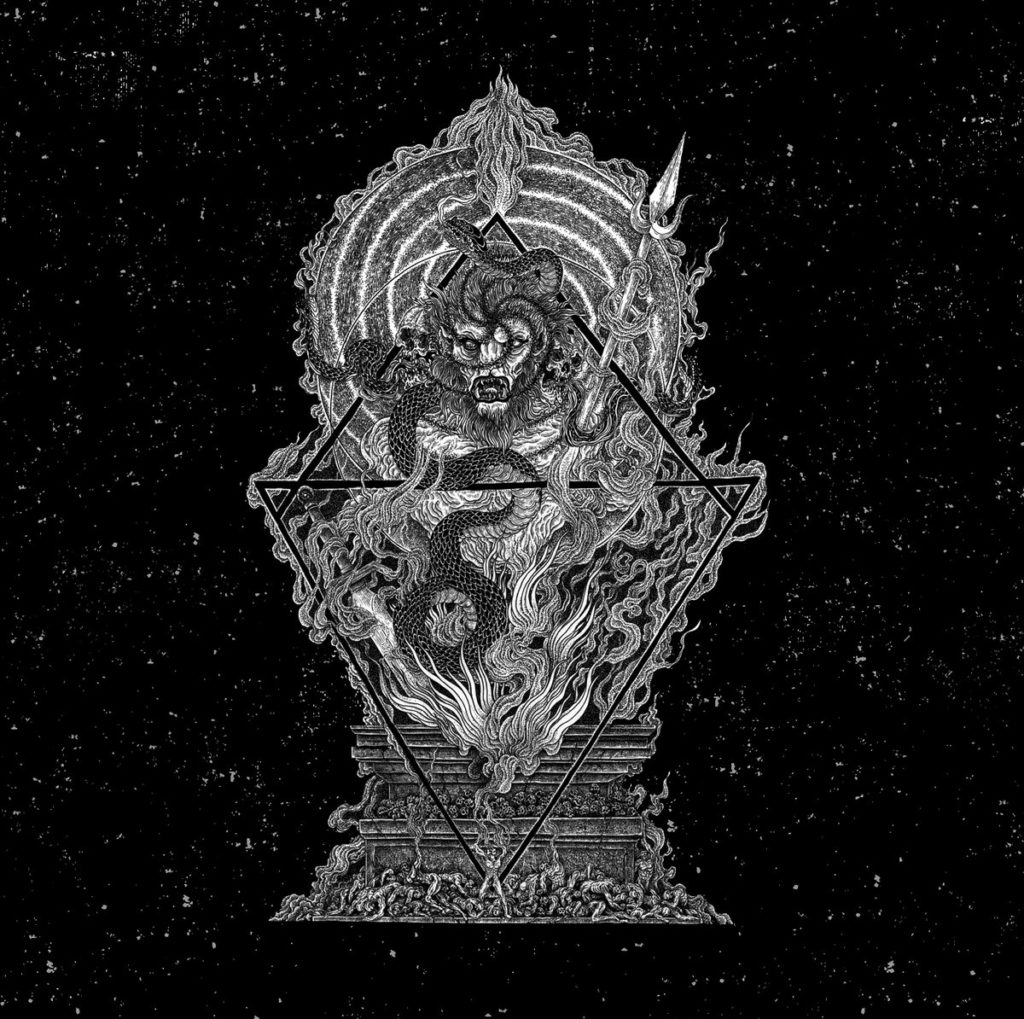 “I travelled to Sri Lanka in 2016 and spent most of my time with the members of Genocide Shrines and Serpents Athirst as well as meeting the wider Pannipitiya collective,” says N.H. “We’d been in touch since 2011, shortly before the Genocide Shrines EP came out which I’d recommended to Iron Bonehead at the time. As such, we had a strong connection between both bands in our formative years which had strengthened since, so they were always a natural ally.”

“We had been considering putting out a short release of new material at the time to coincide with Death Ordinance planned for the following year. We discussed and agreed on a split release with Genocide Shrines and Serpents Athirst representing Sri Lanka with Trepanation joining us from New Zealand. 4 bands with different timelines didn’t work out as intended, the track we originally recorded was also on Death Ordinance and with shows, touring, line-up changes and other commitments we didn’t get to finish recording until returning from our second US tour in 2018.”

Over the years we’ve seen an influx of impressive extreme music coming from the scantily populated New Zealand. Being physically isolated from the rest of the world comes with its own set of challenges, but has made the sounds endemic to the island nation stand out amongst the crush. “The geographic isolation, relative youth as a nation, the intense nature of the New Zealand Wars (Kai Tangata was a key inspiration for ‘Carnivore’) and our surroundings have all been a source of inspiration,” he says. “How much so is intangible since I can only reference growing up in New Zealand and Australia but the differences are certainly noticeable when travelling abroad.” 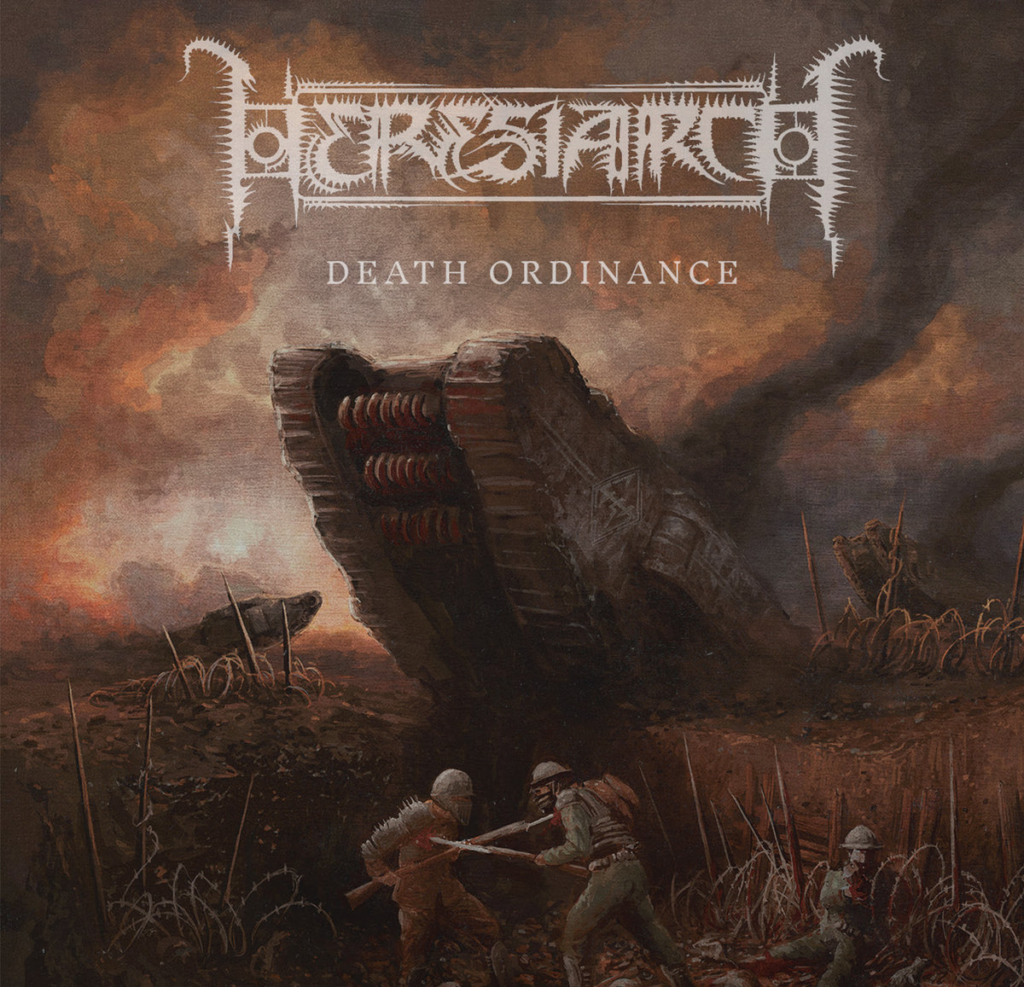 “The logistics of touring and travel requires a lot of planning and coordination when looking outside of New Zealand and Australia. Potentially this has improved the standard of bands which have made it out of our country, particularly across Death and Black/Death Metal as it requires bands to be more purposeful, willful and self-determined,” he continues. “Living in Wellington had some more tedious obstacles, especially with forming a line-up to perform and record with. There were very few people interested in this type of music then and it was difficult finding suitable musicians within New Zealand. For the first 3 releases all other members’ lived in different cities to me.”

“Discovering and physically buying music at the time was expensive, having to pay ridiculous prices for imported releases and merchandise from retailers. Eventually I started Internecion Productions and began distributing, promoting and releasing material myself within NZ and abroad. One of the key points I’ve noticed about worthwhile New Zealand bands and people is an initiative to seek out and actualise what we want to happen ourselves.” 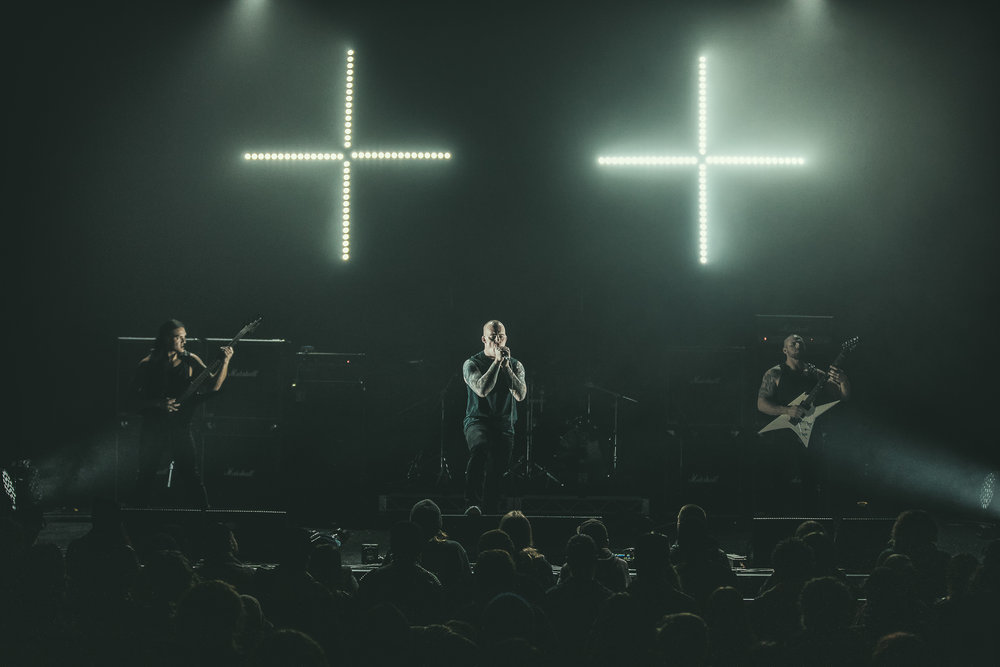 The shift in extreme music towards bands having a comprehensive and total vision for their œuvres is not entirely recent, though we have come to see a lot more of this in the past decade, giving artists more of a guiding hand in how their work is taken in and perceived. Heresiarch’s partaking in this kind of artistic direction seems to have been innate, evident in the thread that runs through their music, artwork and presentation. “We are involved with all components of a release from artwork, writing, recording and mixing process. Initially this was with some brashness due to youth, limited reference, perspective and experience. Later this was achieved with a clearer vision and more focus, particularly with Wælwulf, Death Ordinance and material we have written since,” says N.H. “Ideas are fleshed out from the root level with a ‘holistic’ view of all mediums such as the broad lyrical content and narrative as well as delivery, role each instrument plays, atmosphere, aesthetics and how they all interrelate.”

“Our music is often primitive to compliment the blunt and cruel nature of our topics, and the artwork should represent this on a grand scale. It’s important to envision how each component of the release represents itself, identify the suitable artist and then direct the vision until completion. Whether or not what we achieve is “ground-breaking” is of little concern. We write for our own satisfaction and have control, through that there is honesty and integrity to the vision which is crucial.”

After their performance at Covenant Festival III, Heresiarch’s 2018 US tour was their last stint on the road – besides the aforementioned split, they have been at work forming what’s to come. “We recently finished another split which is anticipated to be released 2020, whilst being true to our sound and delivery this also delves into newer territory for us. We are composing our second album with the conceptual direction and purpose of the release outlined; it will coincide with Death Ordinance but will be more bleak and violent. What we have set as objectives and written to date is a natural progression from previous releases though there will be emphasised regressions as well. This will be our primary focus for the foreseeable future.  South East Asia and Europe have been in our sights for some time, but we won’t be addressing this until after the second album.” 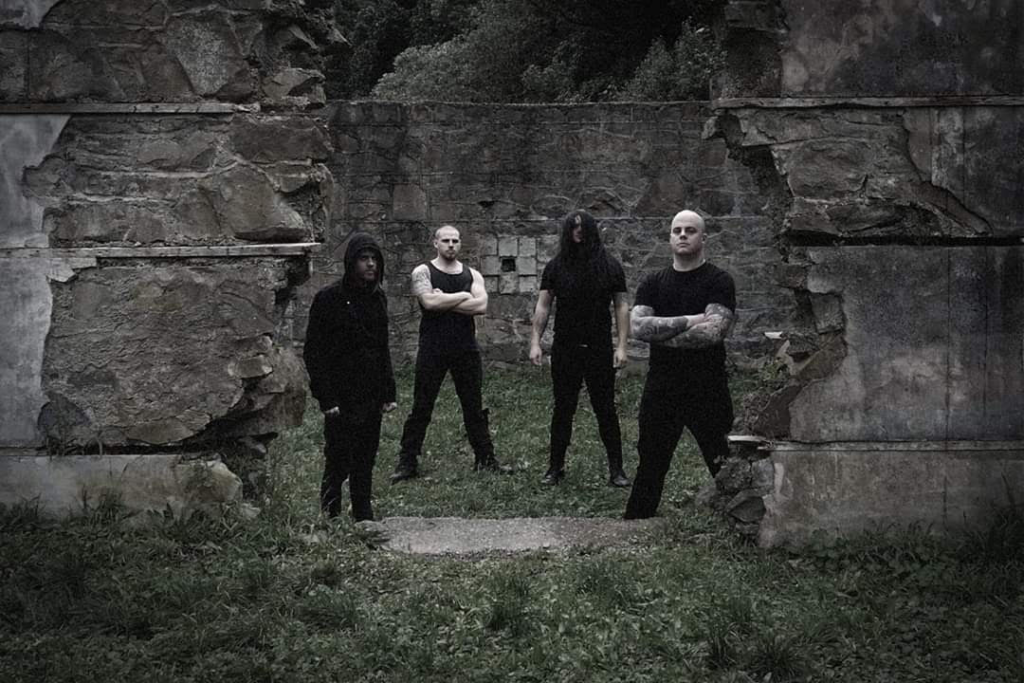 As they continue to dilate the abstract of their work, Heresiarch speaks to the confrontation of the individual against the powers of mass submission, and the many ways we’ve found to obscure true existence – a confrontation that we may never see to fulfillment.

“Countless slaughters have occurred throughout millennia from those who believe they possessed knowledge of absolute truth and were wholly justified in their means and actions. The control that despots, hegemons and cults had in the previous centuries shattered power dynamics, resulting in myopic perspective, loss of individual autonomy and mass death via their ‘true believers’.”

“It’s a recurrent theme throughout history and is highly likely to continue. Ultimately we are a Black/Death Metal band documenting the scenarios mentioned previously. Our ethos is much more detached and not directed towards a utopian ideal. As a witness to the last man and destruction of all life; struggle, force and death are the only truths Heresiarch can objectively see.” 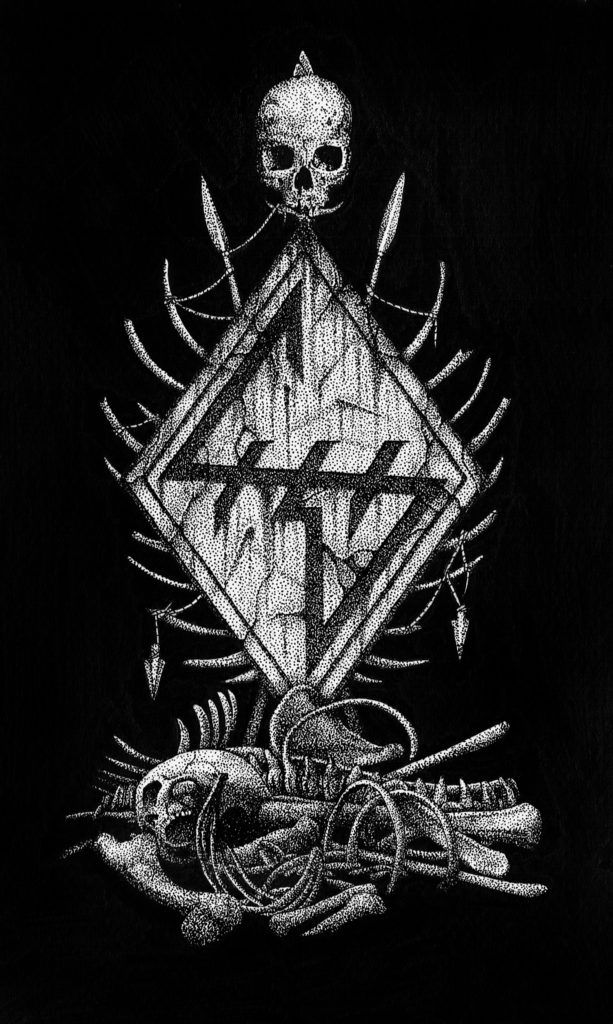