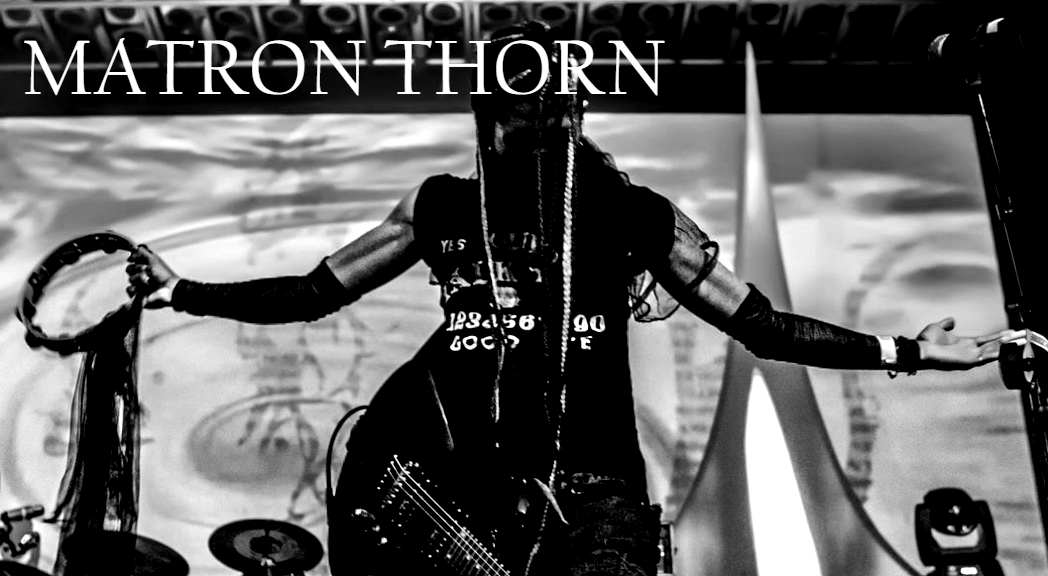 Today we have the unique pleasure of speaking with one of the most enigmatic figures in the extreme metal world. Coupling a bizarrely tangible aesthetic with exceptionally unforgiving, unapproachable music, Matron Thron has made a name for himself with a compelling and unique atmosphere in a genre that so often celebrates copying, and even direct clones.

Thorn is known most widely for his seminal work in Ævangelist, the entirely alien and unforgiving death metal entity that has been terrifying the world for 9 years now. Ævangelist rose to prominence for fusing the Morbid Angel school of jagged, fungal death metal, with overwhelming, foreboding gothic and post-punk sensibilities. Coated in a dense fog of reverb and paradoxically methodical yet uncaring production values, their sound quickly became instantly recognizable, and remains a love-it-or-hate-it subject to nearly all who have heard it. 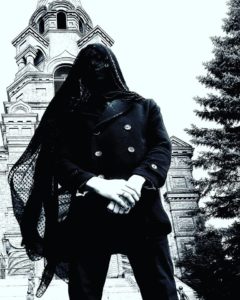 Thorns origins in music available to the public, however, can be traced back to the equally outre and unnerving projects Midwinter Storm and Benighted in Sodom. It is from the seeds of these galvanizing, cold-hearted expressions of suffering that the root work for one of metal’s most important contemporary musicians have blossomed.

A second article, cataloging all of Thorns’ enormous past output will follow, but for today enjoy a mind-bending look at exactly what inspires Reuben Christopher Jordan.

The first thing I would like to know is the surroundings and influences that went in to the forming of Ævangelist as a vessel for manifestation. Paint a picture of that time in life for us.

Before Ævangelist, there was a void, a greater need for expression beyond avenues and concepts previously explored. The central idea was always to take some very real, almost tangibly real, facets of certain mental health disturbances that were emerging at the time and transmit their effects into audial frequencies as maybe experimentation, maybe therapy, maybe malice towards others. Either way, this transmission was received, and suddenly a broken world became a catalyst for the ultimate masterwork of art.

So in this context do you view Ævangelist as the lesser or greater of evils? Is it a therapeutic outlet, or is it something all together more abstract simply brought about through a liminal period?

In the beginning, our own motives were forced into question by the sheer volume of distressed and troubled reactions there were to our music and messages. It was, however, vital to preserve the authenticity of the art, and in doing so it required that we view the role of Ævangelist on this planet as something pure, something transcendent, something of evil in nature. Real evil is like an unstable chemical. It can’t be included and mixed with most things, and even to its admirers it is fearsome and caustic. Despite this, art is art, even if its visage is ugly. Ugliness can be next to godliness.

So, in regards to people’s responses to ugly art… this may be a futile case of overthinking, but there is a marked change in how… demented… Ævangelist’s sound became after Omen Ex Simulacra. What necessitated making such an obscure, impenetrable project even more abstract, and frankly insane?

Each release made us more self-aware, and the more self aware we became, the more reductive our efforts became to express something so profound; every release is only a starting point, a hurdle to jump, a summit to claim and surpass. After Omen Ex Simulacra, we began to understand the philosophy of inverse creation, creating the means to destroy, and how much freedom we actually had when we kept little commonality with others who simply want to have “a band”. Nothing to object with there, but that is simply not enough for us, simply not enough for the fullness of the glory of our sacred muse.

Now we’re really starting to get in to the things that I’d like to ask you. To me, Ævangelist has always had this feeling of an intrinsic set of laws within the madness, like an overarching and ever-present mythos of beings, rules, empires, magical workings, and detailed dynamics that exist only and exclusively within your music and art. With no explicit attempt to make it “logical” to anyone (though without going out of your way to convolute it) can you attempt to delineate some of the forces at work within your music?

We recognized early on that our cause was driven by a supernatural force we refer to only as “the muse”. Thus, it communicates through what we do, speaking through– or perhaps even in spite of –us, its origin is unknown and it appears to lack empathy for all but certain individuals that have chosen to hearken to the holy vibrations of it’s voice as it echoes throughout the universe. Certain images were designed on par with the constellations and a system of divination, even a language with an alphabet and syntax were invented from this lengthy series of divine inspirations.

From that last question, this feels like a good point to get in to Ævangelist’s sigilwork. Where many personal sigils have a clear line of influence (visibly) in line with the powers they call upon, Ævangelist’s sigils are as equally alien as the forces that they serve as the conduit for. What is going on here?

The muse that delivers inspiration through Ævangelist is formless and manifests in the cascading arabesques closest to my limited human comprehension of its ultimately praeternatural presence and ambiguity. It is utterly unknowable, however its emanations do affect us all as dreams, as deja vu, as premonitions, as near-death experiences. The sigils are a direct visual representation of that, straddling a line psychologically between eerie nostalgia and madness itself. And madness is profound as the firmament of the universe. Sigilwork draws upon these tenets of faith to create spiritually charged symbols to stoke the imagination and seize those emanations.

This hiraeth you’re speaking of… what is this forgotten time? What happened there? What is the primal impulse, and eventual objective of this gathering, charging momentum? 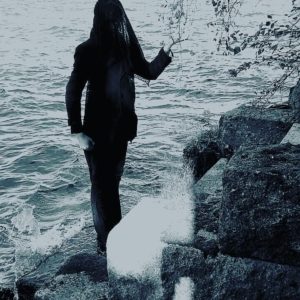 Does Ævangelist then hail the creating essence, or look for a weak link in the karmatic chain?

They, and I identify them as ‘they’ because their voices speak as many, they want us to construct their pantheon here in the Garden of Aidenn, perhaps to mock our Gods, perhaps to satisfy their own arrogance and erect in bravado a monolith to shadow over all others, and leave barren the soil from which fertile dreams once sprung, those same dreams that taught men that the universe was infinite and there were no absolutes; it seeks to rewrite creation and instill a primeval essence within man, and that is fear. Fear of true, radical evil as a living organism greater than ourselves. Perhaps the muse wants to warn us, or beckon our surrender out of mercy for our fate. Either way, what you may view as eternity is a looming shadow that bides it’s time on the fringes of the multiverse, writhing with an ever growing hunger for the very creation we seek.

Using creation as the bridge here, talk to me about your visual art work. As it is the medium more commonly associated with creating, as there is a physical end product, does any part of your process mirror the aforementioned metaphysical dynamic?

First, I would not want this to be understated; all creation is inherent magic, the origins of which we’ve adapted to use rationality and logic to explain through the sciences and mathematics, but to no discernible end. The unknown, the unknowable, the vast rift between us and divinity is bridged when we submit ourselves to the possibility of higher planes of immaterial existence that though do not govern us, they abide and coexist, occupying the same spacial realms and beyond. These are transcendent concepts that should be met with veneration and wonder, but also with humble fear. Creation of art is a mirror to these concepts, and in fact all art, before it is manifest, originates from the same hidden universe as the fruition of life itself, and it takes many forms dependent on the caliber of faith carried by the dreamer, the illusionist, the artist. Manifesting art is bringing something through a gateway into our tangible universe, the conjuration from one dimension to the next, this is one of the oldest and most fundamental forms of magic. 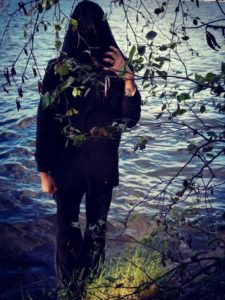 Something I want to ask you, in regards to magic in its fundamental forms, is who were the important magicians to you in your fundamental years? This could be more obvious (read: occultists) or the choices could be more clandestine (poets, writers, actors, painters, etc). Most importantly: why?

The symbols and glyphs occurred organically, before I had any context for their true strength or purpose. When I was about ten or so, I was already drawing them, and I attended a private Catholic school prior to being eventually expelled. One of my teachers was enamoured by my strange drawings and introduced the concepts of cosmology, skrying, and sigilcraft into my developing spirituality, something that would heroically eventually cost her employment there, it being a religious learning facility and all. Her name, fittingly, and most perplexingly to this day, Ms. Divine. Eventually, I satisfied my earliest curiosities vicariously through writer Grant Morrison, who, himself, has worked with sigils and magical symbols in his personal life, but also, most interestingly, in the framework of his creations; this is perhaps my greatest source of inspiration, and thus sigils are weaved into the fabric of all the music I create, all the writings I author, everything I wish to imbue with the frequencies of the great hidden yonder between the stars.

Well, we have a lot of fascinating things here, that while explanatory in nature, might shroud Ævangelist more than reveal. What should we close on?

“And those who were seen dancing were thought to be insane by those who could not hear the music.”