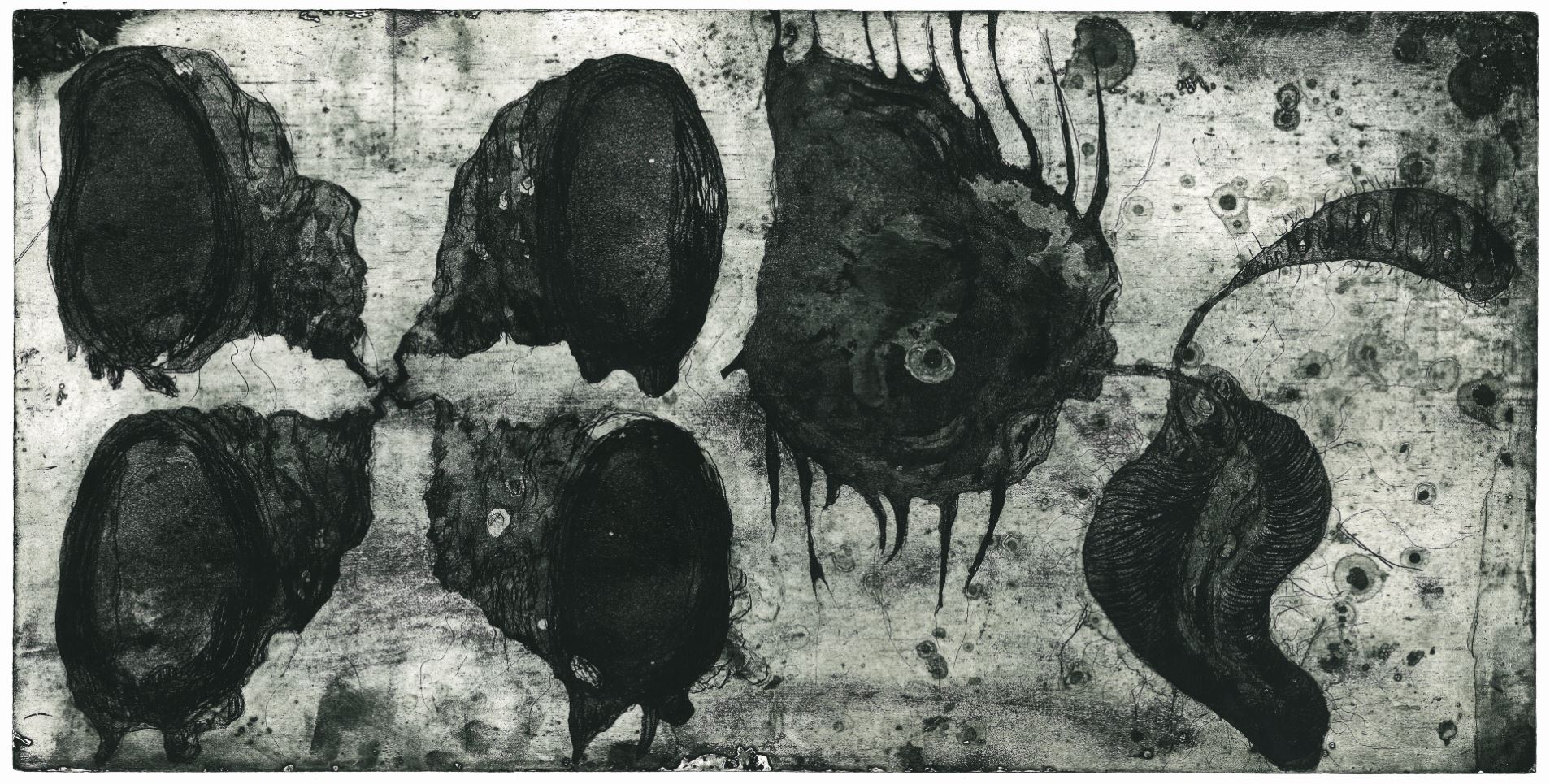 In a genre of music oft devoted to spiritual work, it isn’t uncommon to see the names and faces of the band members obscured, or to see the band presented in a way that makes the individual insignificant to the whole. This works as a simple and effective way of keeping the ego at bay, not allowing it to interfere with the deliverance of pure, azothic art.

In this discussion we choose to focus on Timothy Grieco, known to the masses as Haasiophis, as an individual, due to the rare consistency he has been able to achieve in all aspects of his work. Canada’s perplexing madman is guilty of inflicting music from the likes of ANTEDILUVIAN, REVENGE, AMPHISBAENA, MALSANCTUM, and even more on this sphere, propagating through Serpents Head Reprisal, and creating mindbinding visuals for many artists’ album covers and merchandise. From harrowing visual art, crucial musical contributions in a handful of seminal projects, and a label that has strengthened the work of the kindred, it is abundantly clear that the essence and will of Haasiophis’ projects is directed with rare intent

Read below as we cut through the anonymity and unite the multifaceted figure into one voice. 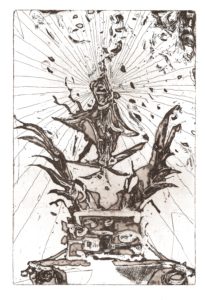 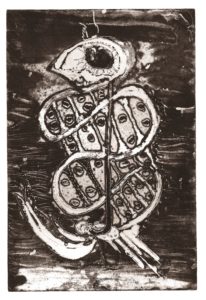 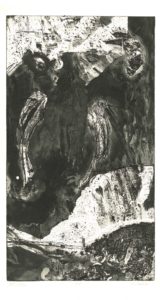 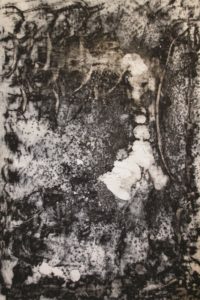 Antediluvian has been one of the fore-runners of what seems to be a dark death/black metal style resurgence in Canada (and worldwide) since about the mid 2000s. Why did you start the band and what made you want to do this style? 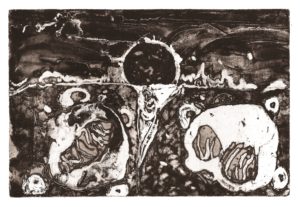 When I started the ANTEDILUVIAN, I was interested in the unique, over the top sound of bands such as BLASPHEMY, CONQUEROR, UNHOLY ARCHANGEL, MYSTIFIER, GOATPENIS, AXIS OF ADVANCE, BEHERIT. They all have their own sound and angle, but seemed to combine the harshest elements of black/death/grind/doom, giving the archaic and obscure feeling to the music formally. This would fit with the areas I was exploring conceptually in my personal practice of worshiping the unknown and my research beyond the edges of the boundaries in human consciousness, history and religious studies. I decided to down-tune my guitar and started rehearsing with MARS SEKHMET, who learned drums just to play this style with me.

Antediluvian has never been terribly concerned with pace or keeping up appearances. At times you have throngs of shows across a bunch of different countries and release albums in close proximity, and then the band will vanish in to the shadows for a few years, only to revived once again with a sudden blast. Can you talk to me about this seemingly spastic balance of inertia and momentum, stasis and change? 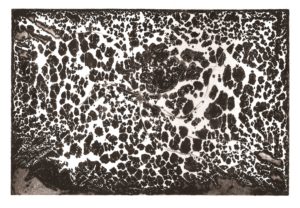 We worked steadily from 2005-2012, rehearsing 3-4 times per week and writing 41 songs. The last 3 years of work culminated in two full lengths, three splits, and a slew of live shows. Then the drummer moved to Austria and we took the first and only break we ever had. From there, working oceans apart, we played 10 shows in Europe in 2015, 2 in North America and then decided to focus on writing the third album which is nearing completion. We have also slated a split release which will probably be released this year.

Canada has traditionally had three main birthing pools for extreme metal: Vancouver, Montreal, and Edmonton. Vancouver and Montreal have had their histories clearly examined time and time again. The mystique of Blasphemy and Ross Bay has been explained ad infinitum, and the early days of Cryptopsy/Gorguts/Kataklysm have been closely examined, but Edmonton, however, has remained a little bit more of a mystery to outsiders. As outsiders, but now long-time Edmontoners, perhaps you can elucidate us with a unique perspective. What is the type of energy that flows in such a seemingly dismal place that has lead to the creation of such demented music for such a long time? 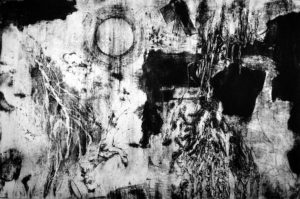 I didn’t live in Alberta until 2006… but DISCIPLES OF POWER and a handful of extreme death metal bands were rehearsing and doing shows in the early 90’s. None of the other people in Revenge or Antediluvian are actually Edmonton natives if I recall correctly, but they were living here at that time. It’s cold here with long dark winters, so activities are somewhat limited to indoor stuff for a big part of the year. Due to remote geography the culture is less tainted by mainstream North American suburban trends. Out of this sort of isolated environment, chaotic unhinged acts CREMATION, SACRAMENTARY ABOLISHMENT, DOMINI INFERI and LUST were spawned. All the guys in those bands were tape trading underground maniacs into BLACK METAL and aware of the international scene. 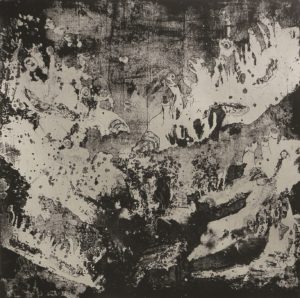 The answer IS simple in the way that music is audio and art is visual. I can’t channel visual thoughts through the music or vice versa. I have always made work in both mediums, and at times the boundaries are blurred and that can be how it gets really interesting. In a word, Synesthesia. It’s not about limitations of either medium, but taking part in the full spectrum of realities that are at one’s disposal. I think both mediums can be seen as a conduit for corrupt spirituality, dumping grounds for shed skins of transformation and receptacles that accept the slew of lies that are the by-product of self actualization. 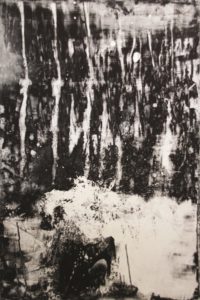 For the better part of the last decade, you have performed live bass for Revenge, and have had embarked on some wild tours that have left a trail of dead and whispers wherever they’ve gone. Can you single out one specific night that you think best exemplifies the essence of BLACK METAL shows of this magnitude?

We have been all over the globe with REVENGE. Brazil and Chile, and Australia were all particularly memorable because of course as it was our first and only time visiting these places, that made the crowds enthusiastic. Nonetheless in my experience the fans are always the harshest and most violent in Poland and Italy. There is also some extra dimension that opens when playing in an open air festival (like Fall of Summer in France or Chaos Descends in Germany). It feels like some genetic memory is awakened when playing outdoors, of some ancient practice since before the dawn of history being relived again and again through the eons. 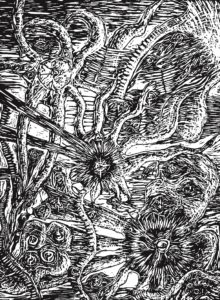 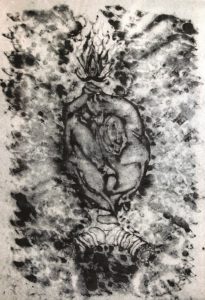 I liked the last Covenant Festival [III in 2017] in Vancouver because it was the first AMPHISBAENA gig. So because I played with REVENGE there also, I was in the very first and very last band of the entire fest. The crowd was excellent for both sets. That’s a good way to tell it’s a good fest lineup: people were there and engaged from beginning to end. The caliber of bands was well selected, and this was part of the reason for success. Also at Covenant Festival NECROHOLOCAUST played, they were the harshest live band I’ve seen besides REVENGE and BLASPHEMY. 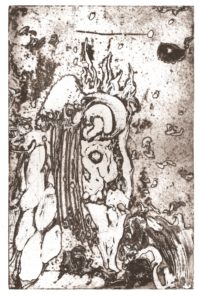 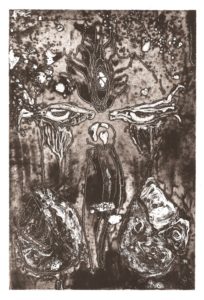 Your performance with Amphisbaena at Covenant Festival III was not only one of the highlights of the festival, but one of the most visually striking things in my recent memory. Let’s talk a little about what that set of lyrics, the band’s ideas and concepts, and that remarkable presentation means for you, and what was the inspiration for you in creating such a “persona”. 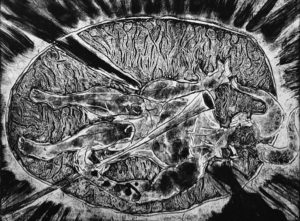 The lyrics and music are written by the other members. The concepts expound on left hand path philosophies and arcane concepts that stir the imagination, elicit SELF reflection, and project actualization beyond the mundane. The presentation is an obscure form of theatre meant to stir the subconscious.

The character is a dweller of the threshold of known and unknown and a celebration of transitory impermanence… like a polyp of mould or fungus that appears, and melts back to the void, regardless of acknowledgement or interpretation.. As beautiful an abomination of creation as the ghost of an aborted fetus-child, or the drop of rabid saliva on the tongue of a bat. Its gleaming tatters represent the only constant in the ouroboric self-feeding of what we have come to know in existence: an instantaneous flash of ageless impermanence. The ideas of how to make the physical garb came to me as if I was remembering a dream from the future. (Although the mask I wore at the first gig was forged many years ago…) The way I put my ideologies into practice often involves letting go… as opposed to “trying” to make something. I physically create forms and ideas but must acknowledge I only channel them from beyond the boundaries of the known … the unknown uses me, to take hold in what we perceive as reality. 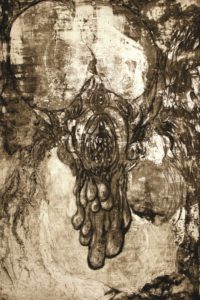 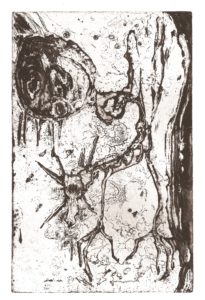 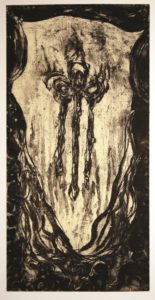 Serpents Head Reprisal, while exceedingly underground, gave an important launching pad to bands like Radioactive Vomit and Dire Omen. Why did you start the label? How do you choose which bands you want to work with? Is there anything brewing in the cauldron currently? 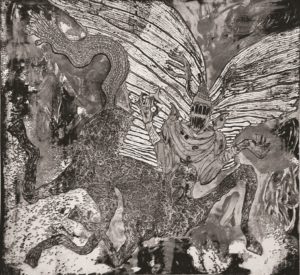 The label was started because I like doing administrative behind the scenes work. It had to do with going back to the source, instead of just absorbing releases, becoming part of the process of their flowing into existence as well. The bands I release have to stir me ideologically and formally (sound wise). It has to contain integrity on both fronts.  If there is some semblance of ideology but a lack of formal individualism I’m not interested. I see that as grasping at proper theory but with no evidence it’s being put into practice. We have some releases from Canada and New Zealand coming soon among other stuff. 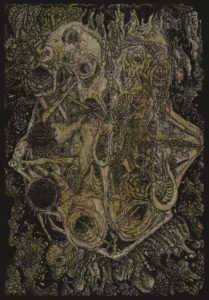 Last, but not least, amongst your recent endeavors was the first, last, and only performance with Conqueror at NWN! Festival. What was it like to be part of such a performance, and to all at once resurrect an ancient body and send it back in to the grave? Is there a difference in the energy playing the Conqueror songs in comparison to the Revenge material?

The performance was monumental. The songs are fairly similar to REVENGE material. The main difference to me was doing the lead vocals. I’m glad I was able to accomplish this and keep the sound as close to the album WAR.CULT.SUPREMACY as possible. 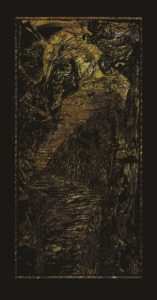