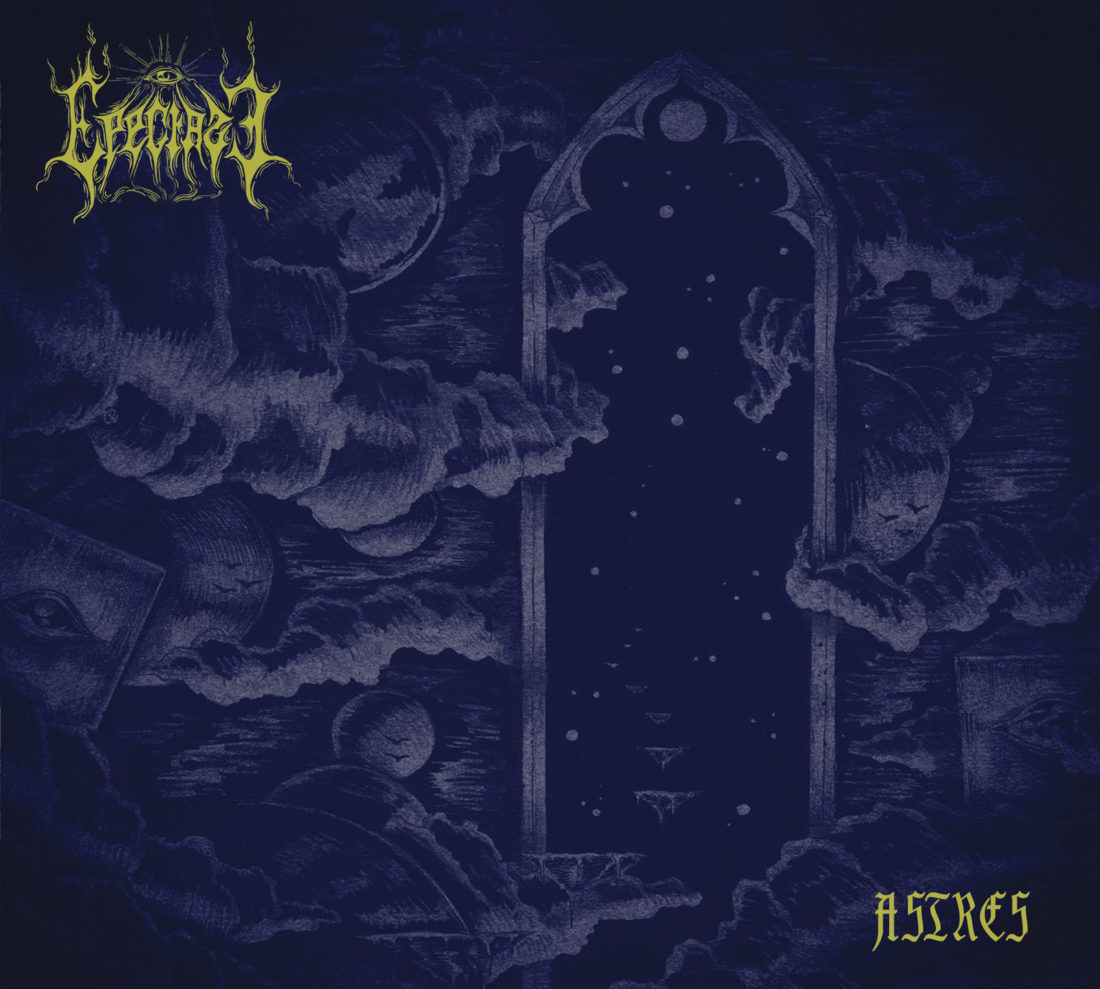 In a realization that is as arcane as it is superterestrial, the French band Epectase – comprised of two musicians known as Vague and Avitis – is set to cast forth their inaugural album Astres. Across five tracks and 63 minutes, Astres is a fully crystalized and monolithic vision exploring themes of opposition and polarity in both sound and philosophy.

The horrors of the cosmic unknown and the deep void of the human psyche emerge as intrinsically linked macro and micro perspectives, with the external veiled universe acting as a symbolic inverse to the internal veil of death itself. Thematically the first two songs center around travel or transition, highlighted by the action verbs of their titles- running/entering. In contrast the final two tracks reference metaphysical destinations of Maze and Sea.

Musically, Astres is a release rooted in black metal with plenty of dissonance and frantic, anxious riffs however these elements work in tandem alongside clean grooves and complex progressive bursts. Catchy, repetitive melodies invoke ruminative effects, expanding on the depth and feel of a riff until the listener is fully immersed. Drums represent significant variation, from relentless crushing blows to spacey clicks and sizzles, or even ceasing entirely to emphasize minimalistic ethereal moments.

The first song “As He Runs Towards the Stars” is a mad dash towards the wicket potential of both the cosmic and inner void. The track snakes between raw black metal and smoother prog-influenced sections, that at times glimmer with a cosmic wonder and at others ring out a sickly warning tone. Next, “Entering the Domain of the Solar Sovereign” is a chaotic nebula of dissonance and floating melody with some of the most memorable and jazzy riffs of the album. Echoed whispering, squealing guitar sections and aggressive low growls give shape and dimension to the sovereign’s epic presence.

Identified as the climax, the middle track “Solar Winds” is highly ambient with half-whispered spoken word lyrics and notes that twang and warble as if warped by the flow of celestial currents. Building to its own apex, droning riffs layer upon lower, denser tones, eventually joined by sibylline clean vocals.

The conclusion of Solar Winds signifies a transition from English to French and to a faster, harsher sound. “La Dédale des Astres et des Âmes” is manic and claustrophobic, it’s peaks of aggression inciting anticipation and terror with every twist. The vocals grow in intensity as growls rise to panicked shrieks drowning in anguish and straining against corporeal decay. “La Mer Pourpre” begins with tidal riffs that rise and churn, slowing to an isolated guitar melody that like mist over still water. The tenuous calm is abruptly broken as turbulent layers return, accompanied by a grim vocal chant.

Astres is exceptionally successful at crafting a bold synthesis of styles, suspiring life into the cosmic and psychological aspects of the album’s vision without relenting the finely wrought threads of existential dread that lie within.

I, VOIDHANGER RECORDS will unveil Epectase’s debut on digipak CD with slipcase.