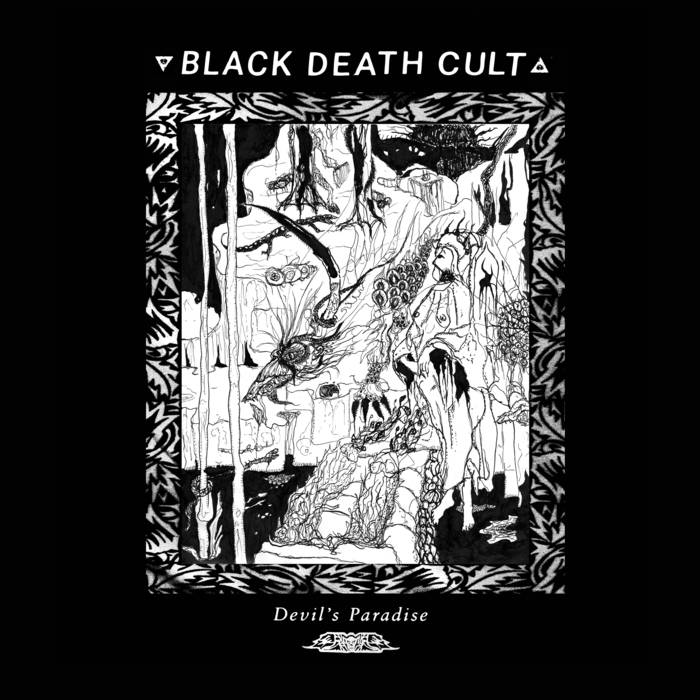 How often does something take you off guard, to such a point that you aren’t even sure you like it or hate it? The very nature of the thing strays from accepted paradigms and into a region of sometimes uncomfortable unfamiliarity, testing you and your taste like an optical illusion tests the eye. Black Death Cult represents one such rarity in music, a faceless entity mashing disparate elements together in the shadows like a mad artisan of eldritch curiosities.

It seems inevitable, as though by design, that BDC should confuse and, perhaps, enrage the average extreme metal fan who stumbles upon its debut full length, Devil’s Paradise. With a name like Black Death Cult, there is an immediate expectation of what awaits, but instead of murky, cavernous death doom, or frantic bestial violence, we are greeted by a true anomaly of the macabre.

In the opening moments of “Infernal Triad”, as the atmospheric guitar inspires an atmosphere of eerie foreshadowing, there is little hint as to what awaits except for the woeful undercurrent of organ notes. But like an uprising from the depths, that minute organ suddenly becomes startlingly monumental, clashing with the guitar for prominence. As though such overt use of organ pipes weren’t already surprising, given the primitive trudge of the rest of the band, the style in which it is played only inspires greater awe as it begins to steer the drums and strings like a vessel into regions of bombastic, even hilariously over the top drama. But a constant ebb and flow exists throughout Devil’s Paradise, as the traces of classic doom and black metal manage to enforce their presence, taking hold before once again being hypnotized by the gothic spirit that permeates the album. 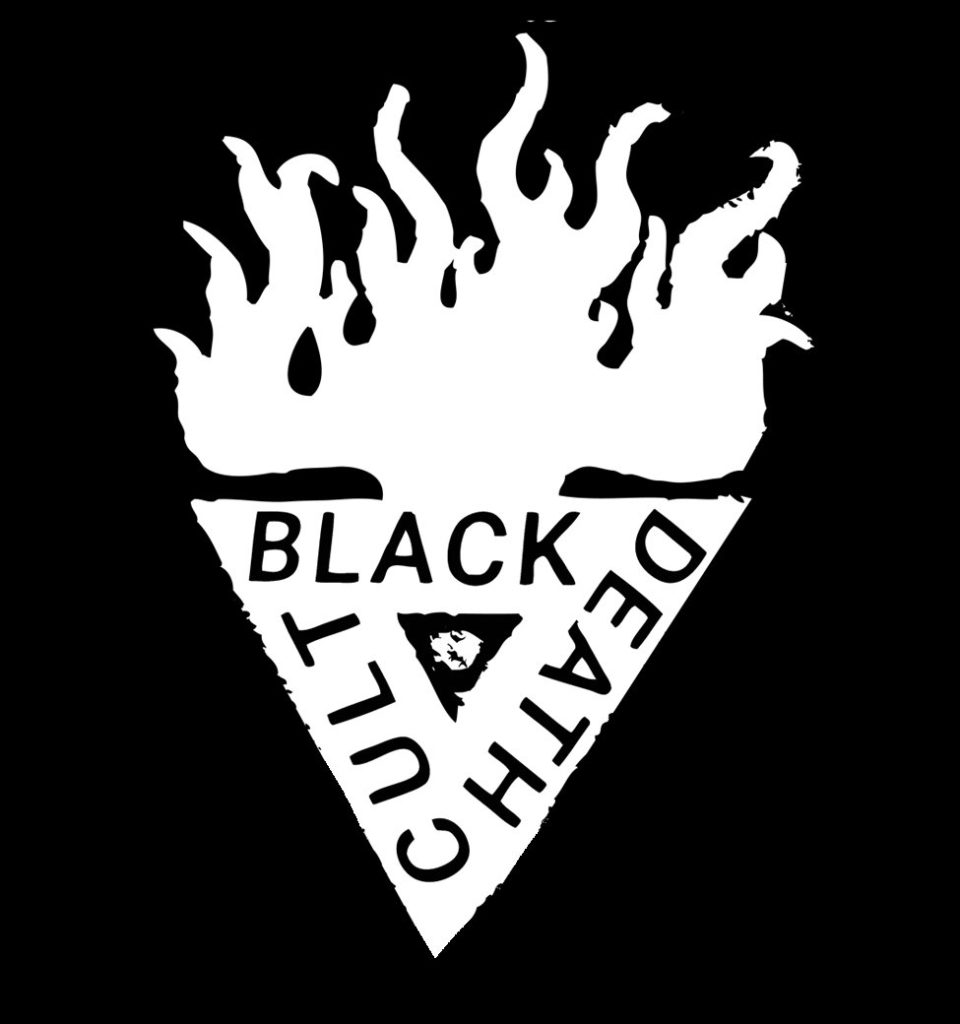 “Double Monolith”, for instance, opens with a straight and narrow plummet into the abyss, characterized by the vocals’ hauntingly claustrophobic rumble and the ignorant bashing of the rhythm section. But like leathery wings unfolding, the music takes wind on organ piped notes, and we find ourselves in the midst of a visceral black mass ritual that suddenly devolves into an insane, tribal dirge as the vocals become possessed with otherworldly fervor.

Such a conflict forms the foundation of nearly every track along Devil’s Paradise, giving it a wholly unpredictable aspect, and yet all the while an overarching continuity is maintained.

Evoking the mood of a fell church congregation in the midst of a Hammer horror film, BDC walk dangerously on the line between unnerving atmosphere and Halloween campiness. The result is a sonic aesthetic reminiscent of the visual style found in archival photos of 1970’s LaVeyen Satanic practice, or that of Aleister Crowley, where the tongue in cheek aspects mingled with undercurrents of occult darkness and tripped out psychedelia. That is to say that BDC revel in the fun that morbid darkness provides, alongside its many mysteries and horrors.

If each song on Devil’s Paradise is thought of as a ritual, then surely the presence of synths represents the hallucinogenic component, which begins to take greater effect toward the latter half of the album, coming to a head in the closer, “The Unnameable”.

Words spoken through a haze of LSD, siren like drones rising up out of the murk to signal the end, all while the band seems to spiral downwards, dragging you alongside them on a nightmarish trip that finally ends in an airy realm of ethereal synths. 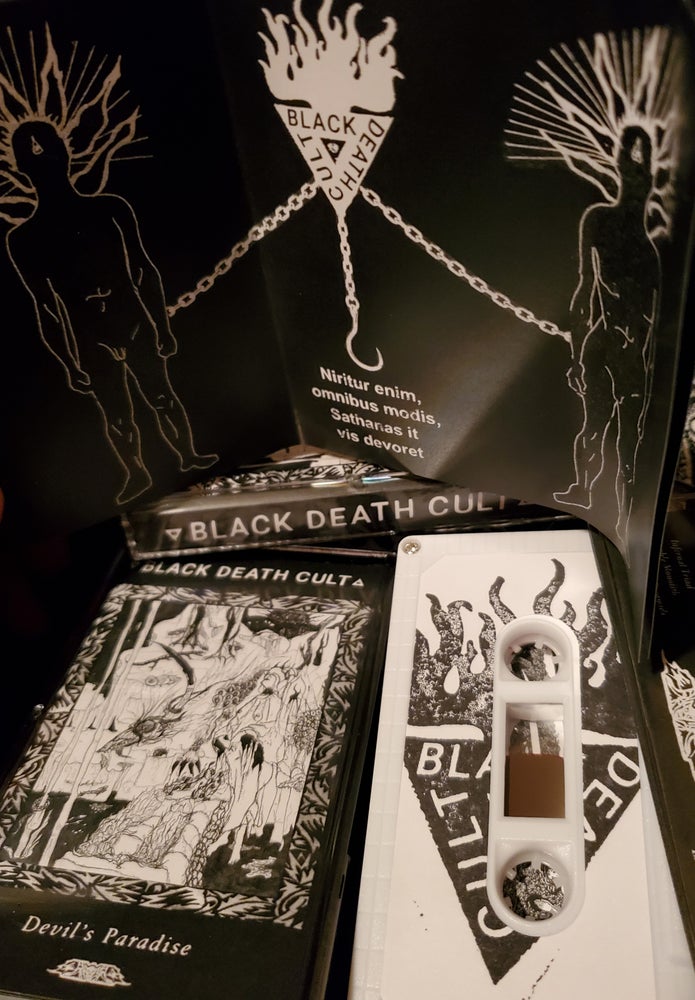 The key to pulling off what BDC attempt in Devil’s Paradise is simply balance. With such strangely juxtaposed elements, balance is everything, or else it all falls apart and is nighe unlistenable. The fact that such a travesty never comes to fruition is credit to the songwriting genius/insanity behind BDC, but even more so in arguably the strongest point on the album: “Nightside Of The Pyramid”.

Exacting a dangerous alignment of atmosphere and heaviness, “Nightside Of The Pyramid” eschews the organ and Hammer horror aesthetic in exchange for John Carpenter – esque synths that speak of the towering mystery of the Egyptian monument. The moment of wonder and beauty is ended as a threshold is crossed and the wrathful spirits of the dead vocalize in swirls about the listener as they descend into subterranean vaults.

“Nightside Of The Pyramid” alone constitutes a journey well worth taking, amidst an even greater whole. This is Black Death Cult at their strongest. 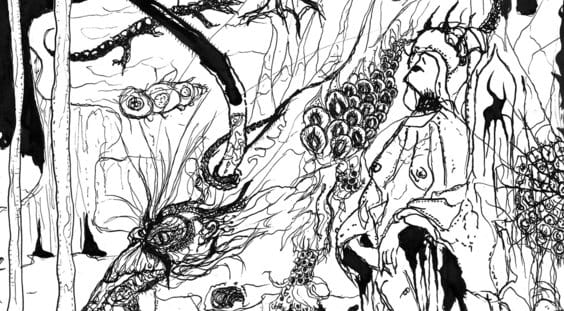 To fully appreciate Devil’s Paradise requires many replays, and a willingness to shift one’s expectations and perceptions. If you’re going in with a need for the kind of cathartic bloodletting that Teitanblood or Death Worship provide, then you are definitely looking in the wrong place. It might be uncomfortable to embrace a somewhat satirical and even comedic aspect to an otherwise humorless area of music that is extreme metal, but that’s what makes Black Death Cult so unique and why Devil’s Paradise deserves to be heard.