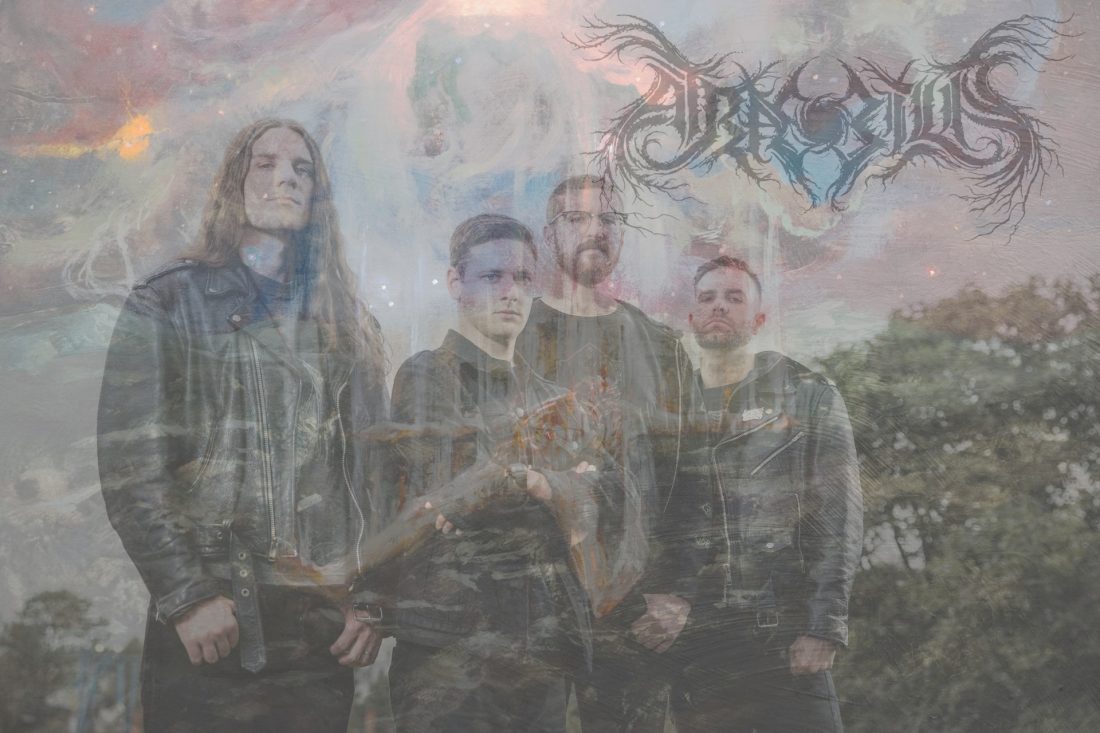 Sitting down with Atræ Bilis’ David Stepanavicius and Luka Govednik, one gets an undeniable feeling of synchronicity between the two. Both have a very deliberate way of speaking, and gentle manner about them that feels like a direct betrayal of the music they write. Even the way they met before they started playing together seems preordained, a chance meeting at a record store in Vancouver. “Everybody that travels around the world knows what it’s like to get a vibe from another person and just know. I think as weird as it is, we both knew when we met that something was up,” says Stepanavicius. “I saw Luka holding a stack of wax at Audiopile, I think it was Cruciamentum, Celtic Frost, Scorpions.. It was just a solid stack and I wanted to say ‘hi’”. Luka adds, “I think he pulled out the new Immortal record and asked me if it was any good. I said it was fuckin’ awesome even without Abbath, and we started talking and that was that. He asked me if I played and I said yes. I asked him if he played and he said yes. Thankfully, we play different instruments,” he laughs.

The ideas started rolling shortly after this first encounter, with jamming turning to writing before they even knew what their project would turn out to be. “I mean, we wrote the very first song before we even had the name,” tells Govednik. “As soon as the name came along we had the second song, which was actually the first one we presented on YouTube – ‘Ectopian’.”

“Luka and I had just met, and I was just reading some personal stuff at the time,” adds Stepanavicius. “It was a book called The Anatomy of Melancholy. There was this idea at the start of the book that people who used to be diagnosed with misanthropy had a malady called ‘atræ bilis’, which is ‘black bile’ in Latin. I flicked the idea over to Luka along with a couple of other thematic things, and we liked the idea that it wasn’t a direct name. It required a little bit of digging. We didn’t really think about too many other ideas that I can recall. It was important for us to have a band name with an even visual representation to help us tune into whatever this was going to sound like.”

Their wide-ranging influences are still apparent on their upcoming debut, Divinihility, with a lot of throwback still making for a straight up modern death metal sound. A cursory listen through the album will give you some old Cannibal Corpse and Morbid Angel, some Suffocation style chugging brutality along with black metal dissonance and tender bridges á la Agalloch. As all-over-the-place as that description might sound, it all simmers together in a way that makes it clear that this project is a tangible auditory realization of years of influence from things all over the extreme music spectrum. 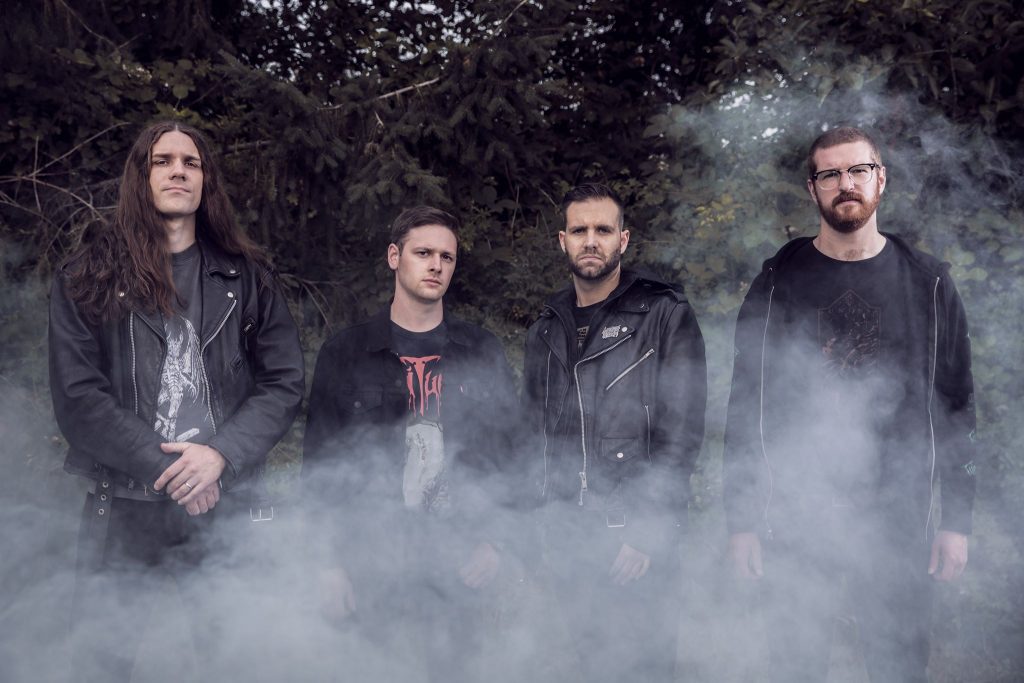 “I think it’s interesting, we still have no real expectations of what the band should sound like,” says Stepanavicius. “We never had the discussion about what we wanted to sound like and even when we first met we had no preconceptions about what kind of music this may or may not sound like. We feel very much like we’re tuning into some kind of energy that we both really share. It’s not like we are any kind of death metal revivalists, we listen to so much different music. Of course, our focus is on death metal and extreme metal and just heavy metal in general.”

The themes on Divinihility are metaphysical, but not written as a full conceptual piece and drawing from many different areas, both spiritual and psychotropic. “I was personally dealing with a lot of ego-related stuff,” says Stepanavicius. “I was also accepting a lot more, particularly with psychedelics, and I wanted to understand why. And there are common themes in so many different trains of thought from different people all across the world, that it’s almost difficult not to make the connections. Particularly with hermetic philosophy, the idea of reincarnation over in the east, it all just came together. So, lyrically, the album is about being reincarnated within the corpse of one’s own body.”

The title of the penultimate track on Divinihility, “Upon the Shoulders of Havayoth ” was particularly intriguing. Some digging found that Havayoth – in some texts – is one of the Azerate, or the eleven deities of Hell (or Qliphoth), but as with all occult mythology has quite a bit of different lore surrounding him. “Havayoth was not part of that reincarnation as much as Havayoth is one higher self that one of the characters in Divinihility gets to meet,” says Stepanavicius. “I came across the name Havayoth in a completely different context. I was reading about spirits and their potential place with us, and the book that I was reading at the time had suggested that Havayoth is god’s real name spelled backwards. And that tied in with the idea of ‘as above, so below’, so that’s where ‘Upon the Shoulders of Havayoth’ came from. The path that my thoughts go lead me to different places, and sometimes it’s to dabble in some areas of philosophy and then right back into other directions,” he adds. “That exploration wasn’t delved into any deeper than the idea of this character in the story meeting itself as a lost spirit where things weren’t so pretty.”

So while there is some dabbling in occult motifs on the record, it really comes back to more universal philosophical themes and human realms of thought. The tie-in to historical spirituality just seems to be there to help paint the picture. “I think everybody is trying to achieve a sense of purpose or understanding,” says Stepanavicius. “I’m also just a very inquisitive person and I’m open to things that I don’t know about and I think a lot of other people are as well. What connects those things, maybe it’s an intrinsic truth. There are things that we can hear when we just shut the fuck up and listen to them. Sometimes it involves not being in an apartment and being distracted by television and the stresses of a day job, sometimes it takes some introspection. I just think that there are a lot of people that feel that they have a lot to say, when fundamentally it’s all the same. Everybody is saying that our purpose is to be mindful and that you’re a product of your environment. And that your environment is a product of yourself. It’s interesting to navigate the world that way.”

Atræ Bilis recently signed on with Transcending Obscurity records ahead of the release of Divinihility, which will be out sometime in early 2020. Being such a new project, it’ll be interesting to see where their creative development and writing goes in the future. “People say that it feels like a meditation when they get to writing stuff, and it’s very true,” says Govednik. “It’s important to have things like music to throw these ideas around and allow you to think freely. It’s a ritual that we do,” adds Stepanavicius. “Everybody talks about music saving their lives, and it truly does mean everything to us and it’s not of so much importance to us what happens with it, as much as we have the opportunity to use music to feel that way.”

ATRÆ BILIS recently signed on with Transcending Obscurity records ahead of the release of Divinihility, which will be out sometime in early 2020.