Without any doubt, one of the most striking visual styles to come about in recent times is that of Luciana Lupe Vasconcelos from Brazil. Her work blends the spastic and automatic style of Austin Osman Spare with a rich, passionate atmosphere full of intrinsic and inseparable occultism.

Hers is a body of work that seems to exist in a world of its own, and it’s this almost wholly realized, unique style that immediately compelled us to know more. Due to her busy schedule we only managed to scratch the surface, as her answers are rare but her responses are elucidating. What results is a short glimpse to satiate the thirst for knowledge in our next installment of Ars Moriendi.

Having supplied art for upcoming Covenant projects, and having been entranced by her work, we emailed her at her home in Brazil to better understand what it is that brings life to her truly one-of-a-kind style. 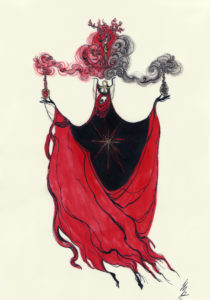 Lupe, perhaps the best first question is one pertaining to the beginning of any of your pieces. There are few artists who have such a style that looks so intrinsically intuitive, evoking the automatic drawings of Austin Osman Spare and Andrew Chumbley, but also the spastic “paint by feeling” colour schemes of Jackson Pollock. Can you take us through your preparatory regimen before starting a piece, be it either structured or entirely chaotic?

I have a few different approaches for the making of a new piece. When it’s a commission, be it an illustration or an artwork for a collector, I’m usually given a certain theme to work with. When that’s the case I like to begin with some research if I’m not acquainted with the subject matter and after that I make loose pencil sketches, exploring the plastic possibilities in an automatic and meditative manner. I do as many sketches as needed until I get to a result that pleases me. I then develop the one I found to be what I envisioned into a full piece – sometimes in a more structured manner, others letting chance decide the final result. It usually ends being a combination of both.

Another approach to a new piece is working from a vision. Often times I just see an image manifest itself in my mind’s eye – sometimes inspired by the mood I’m in, others induced by a song or a book I might be reading, a meditation session, or even an idea or image that I might be obsessing over. Then I try to convey it into a piece, sometimes beginning with a pencil sketch or just working directly with the chosen media without much rational thought. I also often like to use automatism as a starting point, letting chance dictate the final result and then interfering with the images that surface spontaneously.

There is another common, unavoidable motif in your work: the female body. So much has been written in occultism, philosophy, and psychology about the interplay between the female body and mythology, that this question doesn’t require a lot of specific framing. But I do want to know what writings, what drawings, and even what workings spring to life for you when you put brush or pen to draw the goddess form.

I would say that my interest isn’t just in the female body, but in woman as a whole. The female body is present in my work both as form itself and as a representation of the female psyche. I’m very interested in the idea of a world primarily inhabited by woman, a world of flesh but spiritual to the same extent – a world in which the old goddesses and their spiritual allies presides over all that happens. It’s definitely an exercise, to imagine a completely different place than the one we currently live in. This perspective comes from many years of interest not only in works made by women, but anything dealing with the subject of women as a source of power and magic. 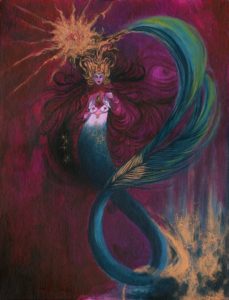 There are, of course, many writers and artists that come to mind as references to me in this regard. My reading list on the subject includes classics of feminist literature such as The Second Sex by Simone de Beauvoir, books by Brazilian authors such as Hilda Hilst, the works of scholars such as Marija Gimbutas and of course, Clarissa P. Estes’ Women Who Run With The Wolves. More recently I became a big fan of Whitney Chadwick, who wrote extensively about the women artists from the surrealist movement, as of Penelope Rosemont and her anthology Surrealist Women. Another influential book for me is Women as Mythmakers, by Estella Lauter. Dealing more closely with the subject of the body, there’s the excellent The Wise Wound, by Penelope Shuttle and Peter Redgrove. On the occult side of things, Dion Fortune is an absolute favorite. More than her occultist oeuvre, I enjoy her fiction and her very interesting female characters. When it comes to visual arts, there are two artists who I consider the most influential to my own work: Cameron and Leonor Fini. Both depict women as magical, powerful and mysterious beings, the female being often at the center of every action. That is something I try to convey in my own pieces.

A simpler one perhaps (or perhaps not), but how does the juxtaposition of the vibrancy and tumult of Brazil influence your work? Be it from an anthropological, cultural, ancestral, or quite simply unavoidable standpoint, do you find nuances of your country ever sneak in to your output?

It’s not easy to define how much of my own cultural background as a Brazilian informs my work, particularly because my preferred themes and style have little (if nothing) to do with the Brazilian tradition in arts. But I can definitely say that my inclinations towards line drawing is a direct consequence from the contact I had with a considerably large array of books illustrated during the 60’s and 70’s in Brazil. A more recent influence is outsider/surrealist artist Darcílio Lima, whose intricate line work I consider to be unparalleled. My work is very personal, so the tumult and recent social unrest that’s been going on recently in Brazil doesn’t seem to affect my artistic output. At least not in an obvious way. 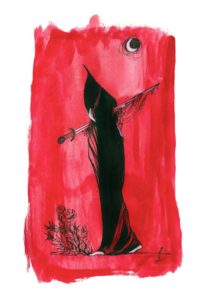 Continuing the cultural train of thought, you have an exhibition coming up in New York, but I was a little unclear as to whether or not you will actually be there. Have you had an exhibition outside of Brazil before?

The majority of the exhibitions I had the pleasure to participate happened outside Brazil, unfortunately I wasn’t able to attend any of them yet. I hope that will change in the near future.

Let us go deeper into the work itself, I want to talk to you about sigillic emblems featured in your art. The wispy, serpentine shapes feature in your pieces often, sometimes in the foreground, and sometimes nestled, and hidden in the back. Can you talk about the importance of incorporating a sigil in your work?

One can notice that many times those sigils come out of the mouths of the characters; I like to think of them as “exhalations of intention“. It’s almost as a particular language, but this is not something that is thought a priori. It just surfaces together with the pieces. Sometimes the sigils are mixed with asemic writing. It’s a form of communication that originates in the unconscious and emerges to the outside world taking a visible form.

The sigils and sigil-like lines in my work are drawn in a very instinctive manner; I rather let chance dictate their making than to rationalize it.

This October, Lupe’s work will be available for viewing at the Cactus Gallery in LA from October 13 – November 3rd. For more info visit www.cactusgalleryla.com

This is the 3rd installment of our visual artists series ARS MORIENDI. Catch up with past interviews from Finland’s Veera Kaamos Pitkänen and Mexico’s Cold Poison.