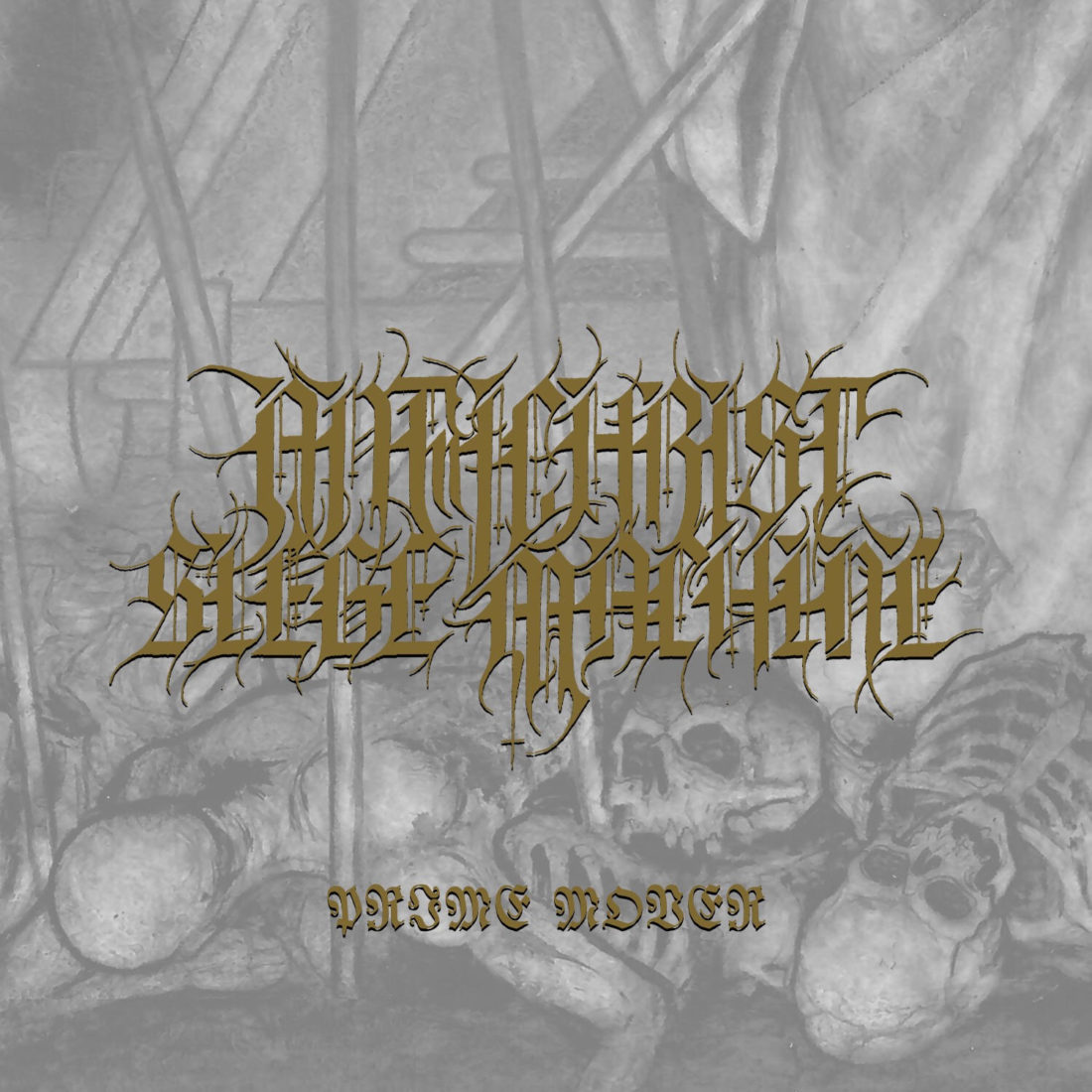 True to their name, Virginia black/death duo Antichrist Siege Machine has been carrying out iconoclastic raids upon the metal underground since their 2016 inception. Following several successful campaigns throughout the United States, their 2016 demo, EP Morbid Triumph, and last years Promo MMXVIII, they are now poised to unleash their debut full length album Schism Perpetration. The coming onslaught is due on LP by Stygian Black Hand and CD by Krucyator Production on August 24th.

Today Covenant premieres “Prime Mover” from the aforementioned Schism Perpetration – an album that sees the band exceed previous outputs with a more developed execution and sound, enhancing upon the barbarity of their formative releases.

“ASM has been a project I wanted to form for many years but could not find a like-minded musician to write with. Z moved to Richmond and we immediately started working. We both wanted to create a sound channeling our influences and to bring an aggression not seen as often with modern acts,” states SB.

In addition to seminal bands in multiple destructive genres, he cites witnessing the destruction of surrounding natural resources, a scorn for religion, and the onset of wars as influences. Whilst many of the topics are not limited to specific events and instead focus on the phenomenon, ideas, and principles, they do draw from personal experience and observation. “As far as music influences, we draw from classic death metal, hardcore punk, and industrial music,” he continues. “We revere the progenitors of this genre: Conqueror, Archgoat, Proclamation, and others. For non-musical influences, I draw inspiration from atrocities committed by the Christian church and the onset of war. I work in land conservation and pull many themes from the carnage I see across Appalachia being perpetrated by monopolized power companies.” 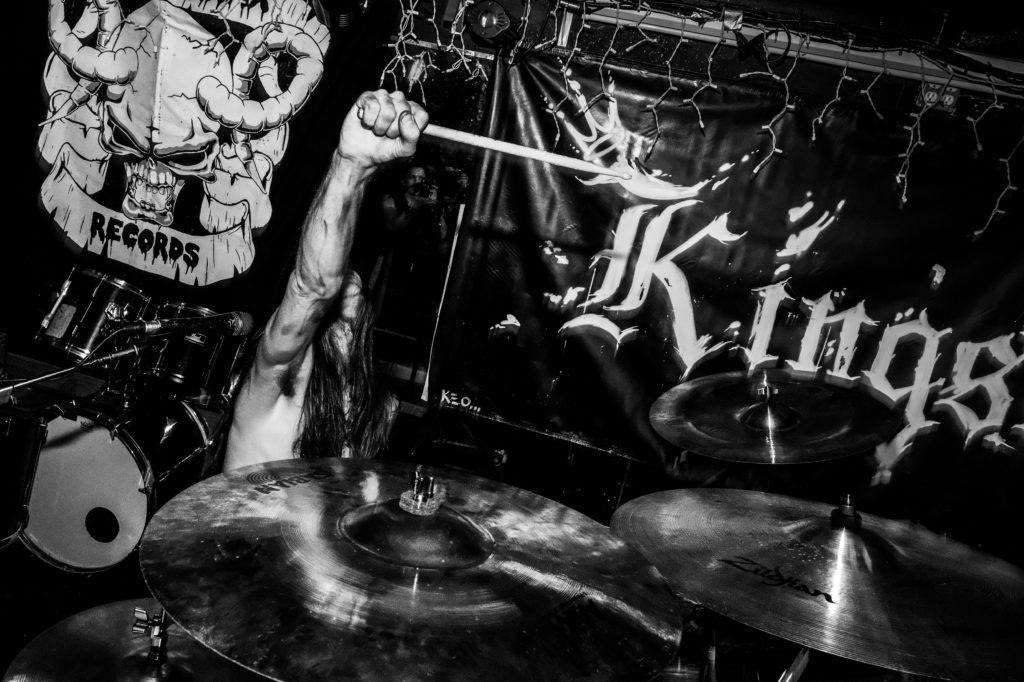 Much of ASM’s material wrestles with ideas versus the recounting of specific periods in time. While something could have happened in 1138, it could also occur in 2020 because the mindset is still there. “As for me saying, ‘onset of wars’ I am referring to the moment or spark in which the flames of aggression burn. That moment is what I seek to draw attention to; not the following violence and not the carnage left over, but the catalyst that triggers the action,” SB states. “I can only draw from my personal experiences for ASM and those are somewhat unique at least among those I’ve encountered in aggressive music. Being raised in a highly sheltered environment sowed the seeds of dissension and rebellion much deeper than those of my peers. I grew to loathe the church and all its co-conspirators. ASM has given me a voice to criticize and blaspheme these crimes against humanity. Abuse is something many are forced to reckon with and I challenge the victims to viciously attack their abusers without mercy.”

Their lyrics draw from the themes mentioned with the execution of the music further sustained with inner conflict, aggression and scorn. “The driving forces behind ASM are warfare against Christianity and the triumph of secular will. Lyrics have taken on a deeper meaning as we have progressed. Initially, the drum parts dictated what the vocals would be as I wrote the words to fit within specific parameters,” he clarifies. “The band has refined this process through each release with growing importance, in itself creating the driving force behind the band.” SB also adds that, “now, ASM’s lyrics reflect much of my own inner conflict and aggression.”

Wielding aggression seems to function as an essential tool in ASM’s creative process. “Aggression is absolutely mandatory for ASM songs. We cannot create without it. Writing these songs requires being in a specific state of mind and if both of us are not there, we cannot work on the band.” Cultivating the mind-set to compose, so to speak. SB proclaims that, “it involves isolation and peace to channel it. Physical fitness is a big part of this band. In order to even be able to perform these songs live, I’ve had to adjust my own breathing habits while drumming and learn new techniques. Cardio is paramount.”

It doesn’t take long for SB to elucidate where exactly this eternal source of fury generates. “Through my work, I witness a lot of tragic sights regarding deforestation and destruction of open-space for human defilement. It is difficult to not become enraged at what this part of the country is undergoing.” 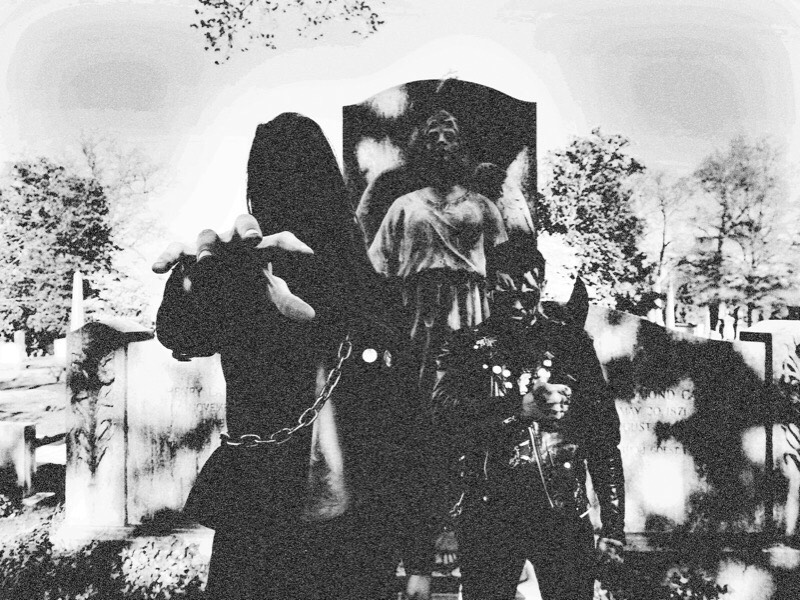 Being a two piece has benefited the band with forging their sound, the creative process, and playing live with minimal disadvantages. From this approach they are able to retain control over the vision without compromise, with an agreed singular purpose and organic writing process – further aiding their productivity. Reflecting upon this arrangement SB adds, “to us, the advantages greatly outweigh the limitations. We precisely target the sound ASM requires. Our writing process is fluid. The difficult part is that we are both involved in many other projects and unfortunately cannot practice very often.”

“Many of our songs have been written from the drums,” he mentions. “Z writes proper [stringed] parts to convey the violence inherent in the drumming. The rest of our songs are the result of collaborative efforts. When writing together we typically will create 15-20 minutes of chaos. The songs make themselves apparent and we split them into cohesive attacks.” In terms of taking this hellish sound to the live arena, he clarifies that, “ASM did not begin as an entity that would play live. It was after the large interest garnered with the 2016 demo that we decided to attempt to play the songs live. It took a little while for my body to adjust to drumming and singing, but now it is somewhat second nature. As far as future ambitions, we would like to continue to tour when able to and visit as many countries outside the United States as we can.”

Antichrist Siege Machine’s first album will be out very shortly, and clocking in at 29 minutes of raw barbaric black/death, it is a purposefully concise salvo. During the writing and recording process for Schism Perpetration, the importance of being selective with their material was paramount. “We felt we were able to convey our intention within that span of time. As far as future records are concerned, it will depend on the way we write the material. Much of Schism Perpetration was written in a short time and when we both feel inspired; we try to write as much as we can. We reject much more than we accept as far as songs go. They will be reworked many times before being performed live as ASM has a distinct sound. If a song sounds good to us but does not fit within ASM’s other material, it is often scrapped.” 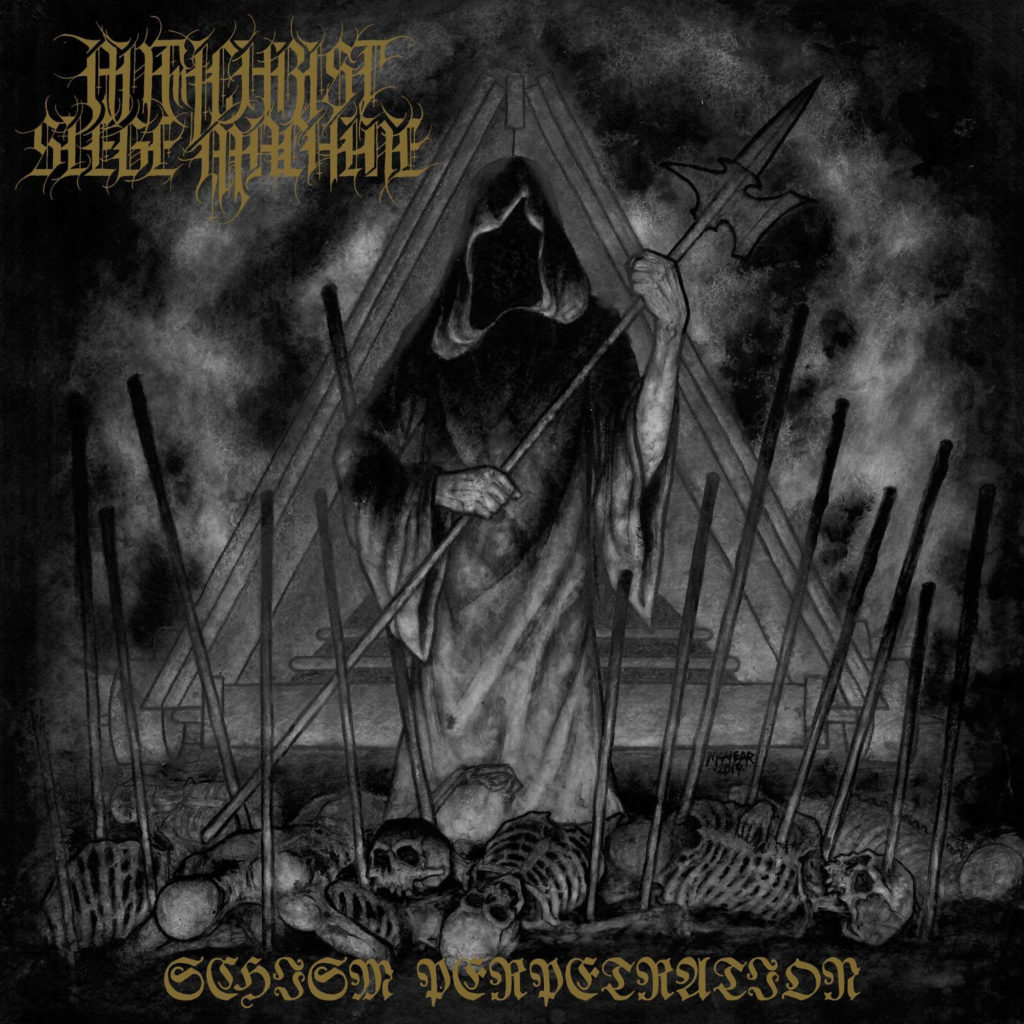 Our writing process was somewhat protracted because our schedules didn’t permit us to meet as much as we had been able to,” SB recalls. A move that actually could have been a blessing in disguise, allowing the visionary to further delve into the topical inspiration for this release. “Since this album took much longer, much more time was spent constructing the message for Schism Perpetration,” he reveals. “I had the album title in my head two years ago. It came to me when studying the split within the Christian church in the 11th century. Much of the themes of this record have to do with spreading blasphemy and invoking righteous violence for one’s beliefs.

The album was once again recorded with the band’s trusted ally BQ, responsible for harnessing the Antichrist Siege Machine sound thus far. “He recorded Morbid Triumph and our 2018 promo tape. I have worked with him for many years and he understands what ASM is communicating. ZLAL of Heavy Breathing and Predation fame has also been a collaborator on every effort following our demo. He brings a vast knowledge of analog sound equipment and enables us to recreate the aggression of our live performances for the recorded tracks.”

The topic of spiritual zealotry is recurrent through history and as the band alluded to previously, but it is not limited to a specific time or historical circumstance. “Religious extremism is still driving much of the conflict seen in the world. Especially in the Middle East, we know that this violence will not cease in our lifetimes,” he deftly admits. With the growth of secularism within society, we’re genuinely curious if the phenomenon would cease or whether it is inherent to human nature, likely to be supplemented by a whole new beast of delusion. “America has been moving in a secular direction but people are still looking for ideologies to force upon others. I think religion will always be there. It may not be what we call ‘religion’ today, but, throughout time, it has proven to be a shapeshifter used by influential people to dominate the weak-minded. Some need to cling to religion for perceived salvation. Others need an entity to eternally wage warfare against. The duality of these things is what ASM seeks to identify. Without darkness there is no light.”

“I am apocalyptic despair and Utopian hope. I am you, therefore I kill”