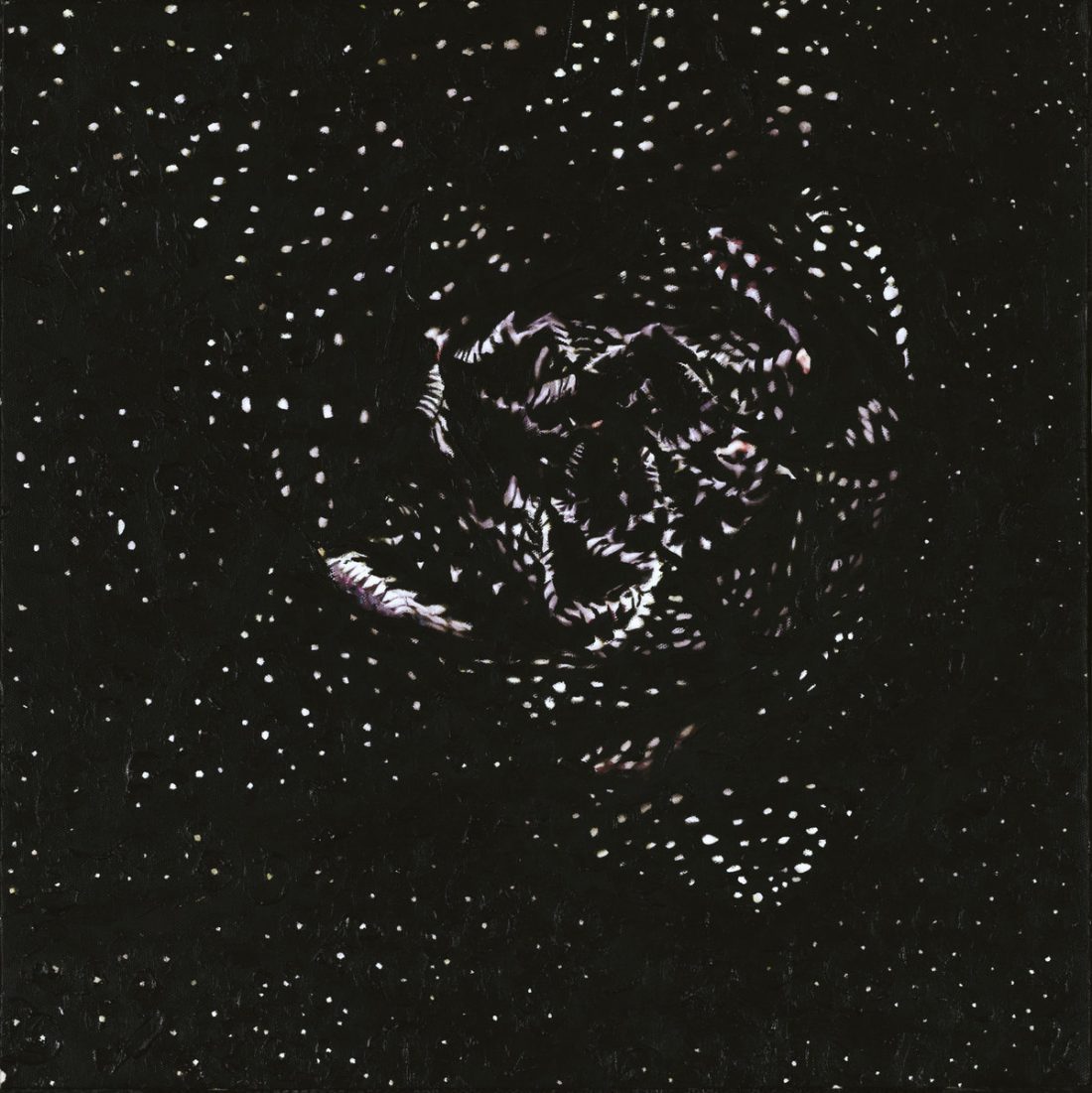 Sex and violence — Two foundational aspects of human nature that are as inseparable to us as the flesh we wear. No matter how we might ascend to higher planes of civility, the seeds remain, however dormant or dominating.

In their long anticipated return to the surface from the nebulous depths, Antediluvian secrete The Divine Punishment upon a world largely in denial of its own proximity to its own reptilian roots. It hangs like an inverse crown to their vile triumvirate of destabilizing aural monoliths.

Haasiophis:
“The first album is the vagina, the second is the penis, and the 3rd one is the butthole. It’s also got the child motif, with the baby demon pictured crushing a man’s sex organs. The vagina + the penis, equals baby. So the first album is about the opening, that’s the beginning, and it’s a void, a zero, a hole, etc. The second album is the penetrative force that fill the hole, the phallic energy of creation and expansion. This third album is the monstrous result of the union of those opposites.” 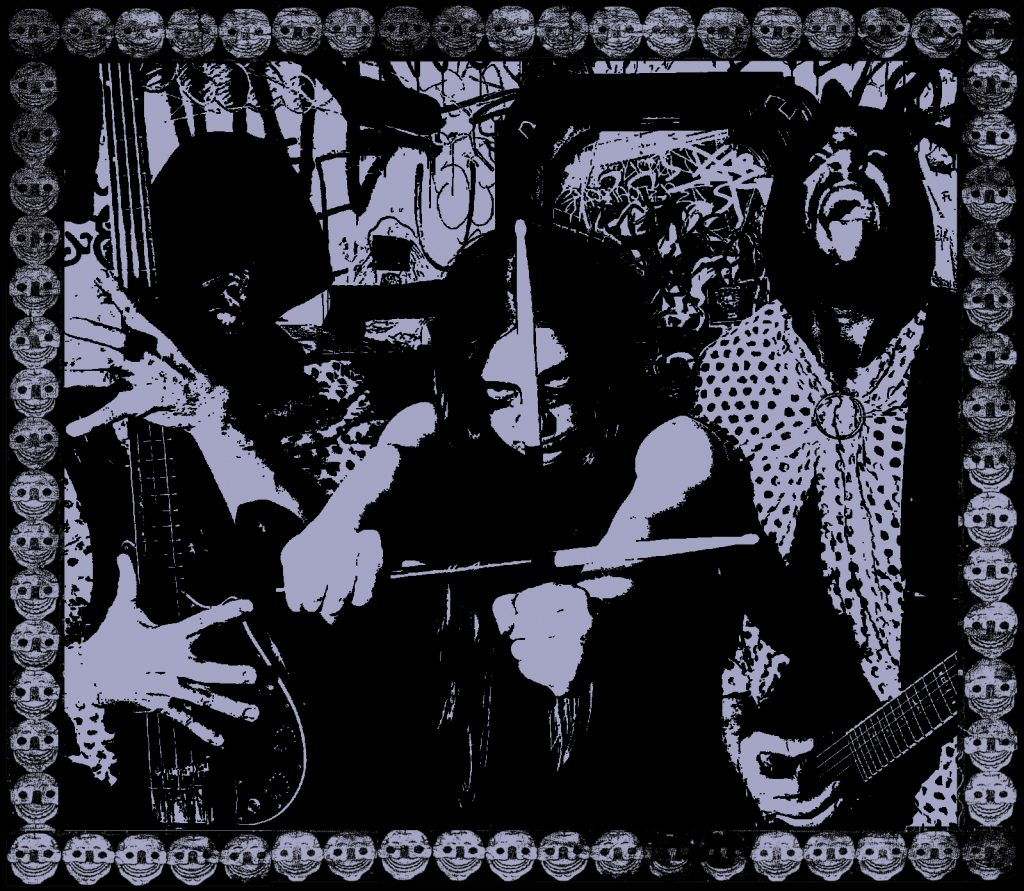 From the early days of Prehistorik Khaos, Antediluvian seemed to have come into being as resolute and realized in its own vile nature, before gestating into greater stages of bestial repugnance. But it is fitting that The Divine Punishment, the product, conceptually and sequentially, of that which has come before, should amount to a summit of horrifying potency and overall consistency.

The impact of Mars Sekhmet’s reality shattering percussion, Aedh Zugna’s augment of strings, combined with Haasiophis’ abyssal guitar and game changing vocality, is such that one can feel a trident of awe, revulsion, and heinous pleasure in each track along The Divine Punishment.

Before even listening to The Divine Punishment, the dominance of sex is made evident in song titles the likes of “Obscene Pornography Manifests in the Divine Universal Consciousness”, “Tamasic Masturbation Ritual”, or “Temple Prostitute”. But to say that The Divine Punishment is a deeply sexual experience is not to say it is titillating or sexy. Rather, Antediluvian draw out those seeds of sex and violence inherent in the primitive reptilian within us, exploring this almost religious act in its rawest, most unhinged form. The insatiable needs to kill and to fuck that have motivated and haunted the species from the dawn of our existence are made manifest via the band’s own orgasmic paroxysms of extreme aural experience.

Haasiophis:
“I repeat the phrase “the means becomes the end” in the lyrics on the album. Procreation, the child, is the endgame of the biological purpose of sex, and here that is portrayed as monstrous. The flipside is that when sex is used or abused for pleasure alone, a means to an end can become an end itself. This is where the butt comes in, literally the “end” and in this context symbolizing methods for using sex for non-procreative purposes. The main lyrical theme of the album is sexual transgression viewed through different lenses, mythology, religion, etc.” 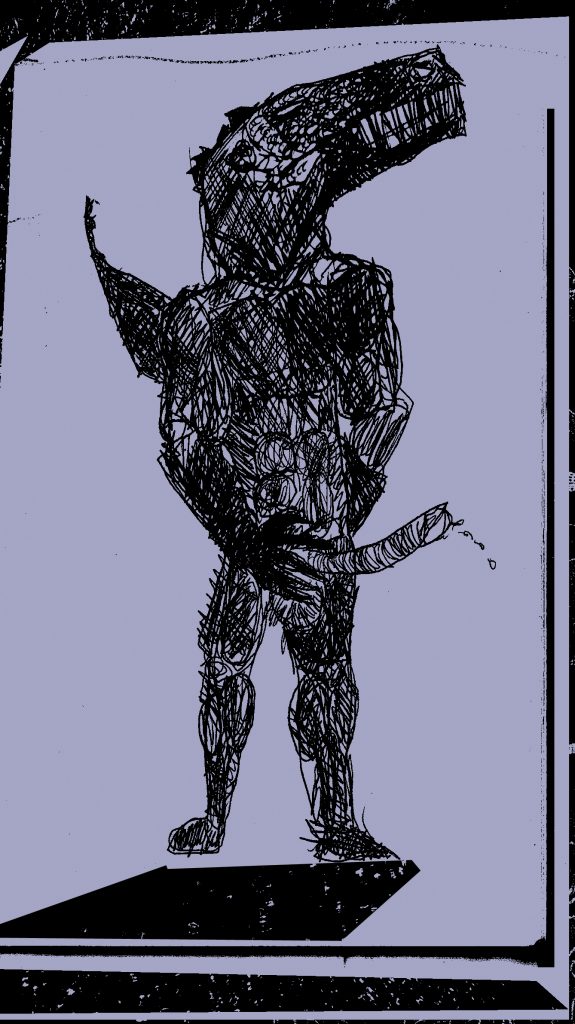 The sound that Antediluvian capture and harness directly reflects Haasiophis’ words and the conflict inherent in these ideas. Like a pendulum anchored between the corporeal and the ethereal, nearly every song along the record swings to and from atmospheres of panegyric of the sacred genitalia, into the dredges of primal fucking — from the spiritual unto the immediate and all too real. But oftentimes the border between the two worlds is soiled as one spills into another, resulting in — Antediluvian.

It is this juxtaposition of greater transcendence matched with the basest urges that binds The Divine Punishment with such startling energy, and aligned with Haasiophis’ own contemplation of the greater significance of sexuality in an occult – metaphysical view.

The execution of this greater effect relies greatly on the dominance of Mars Sekhmet’s drumming, which fuses recognizable extreme metal stylings with an almost lunatic tribal quality. Haasiophis and Aedh Zugna’s guitar/vocal approach often fuses into the drums’ rhythmic heartbeat, fusing the members into a singular musical entity.

“Circumcision Covenant” and “How the Watchers Granted the Humans Sex Magick in the Primordial Aeon” in particular contain expansive landscapes of effervescent percussion that take on the form of a pulsating membrane, secreting in its ecstasy the sounds of slithering guitar and belligerent roaring. In truth, The Divine Punishment would seem more befitting of a fire-lit orgiastic rite than a live gig.

Haasiophis:
“What you would describe as tribal incantations are certain repetitive passages that were implemented purposely to be used as trance inducing meditations. The album is meant to be combined with psychedelics and sex and used as a tool to build energy or engage in shamanistic practices. I realized these hypnotic sections would add to the formula a space for people to meditate, concentrate, focus energy, charge sigils, and participate in heightened states themselves…I just wrote from my gut and started to collage riffs into compositions. The aforementioned trance sections just seemed to materialize naturally. I realized at a certain point how long the album was going to be (over an hour) but decided this was good. We opt for a varied experience, with a lot of different texture and disparate elements to make that entire hour captivating and interesting to both play and listen to. We drew from all the eras and incarnations Antediluvian has gone through and combined these elements, ending up with a true gestalt scenario where the whole becomes greater than the sum of its parts.” 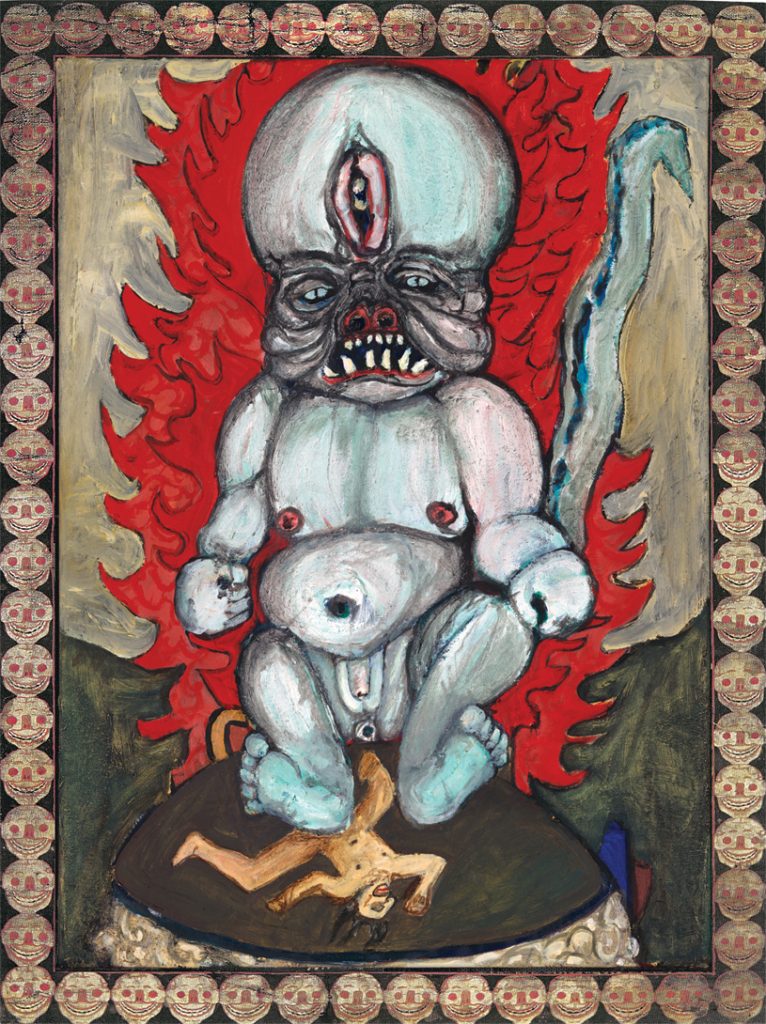 Haasiophis’ mention of a more uninhibited, stream of conscious mode of creation rings true more than ever here, and at no point does Antediluvian feel as though they are leaning on the precepts or standards of black and death metal. Much like a genetic memory from the distant past, listening to The Divine Punishment invokes a familiarity matched with alien discomfort.

In this realm there are no rules, and Antediluvian exercise astonishing musical breadth in tandem with the sound that has defined them as a true pariah amongst outsiders. Standouts are undoubtedly the inclusion of violin on “Guardians Of The Liminal”, which, much like Eric Zann in H.P Lovecraft’s classic short story, reaches a trans-dimensional crescendo that drops the listener into a steep descent toward ichorous cavities; or the perversion of a guitar solo executed solely through string scrapes in “All Along The Sigils Deep”. These unexpected flourishes spike the blood with an added exhilaration as you are hypnotized into letting go — And then it’s over.

To call The Divine Punishment a refreshing experience feels wrong. It is inundating and difficult to grasp (which is what Antediluvian has always done best!!!), though wielding a frightful seductiveness in its barbaric advances. And even as otherworldly as much of the record surely is, the band retain a footing within staunchly black and death metal ferocity that anchors it from losing itself in its own lunacy.

Despite our revulsion, the call to our putrid loins strings us along toward an experience transcendent.

For anyone who has managed to attain a physical copy of The Divine Punishment, the lyrics are laid bare for your interpretation and contemplation. Among these manic arrangements are manifold references and confrontations of themes occult, historical, religious, and philosophical. It is in these words that much of Haasiophis’ inspiration comes to the fore, albeit in a cryptic and often perplexing way. To allow for an enhanced interaction with the ideas at play within The Divine Punishment, Haasiophis elaborated on some avenues toward a higher understanding…

Haasiophis:
“I would just suggest brushing up on world religion, specifically shamanism, tantra, etc. Mircea Eliade is the O.G. shamanism guy. Joseph Campbell can be great for an overview of the differences between the occidental and oriental views. The book “The Gnostics” on City Lights is good, Elaine Pagels has always been a mainstay. Biblical apocrypha and readings on the Dead Sea Scrolls etc are essential. In the earlier era of Antediluvian I was studying this guy Michael S Heiser, a PhD in Semitic languages. He had a lot of solid info on breaking down common misconceptions and mistranslations in Hebrew texts. For a really grounded starting point with tantra and eastern religion I would suggest checking out Ankit Sinha’s Vajra Wisdom podcasts. Then you have the western magick stuff, Thomas Karlson, Phil Hine, Peter Carroll (take em with a grain of salt)… Kenneth Grant, Spare, Crowley, The Golden Dawn. That’s the lineage basically. It’s great to be really familiar with Crowley before you get into any of those other guys who came after him. My favorite book on Qabalah is Q.B.L. by Frater Achad. He was a protégé of Crowley’s who eventually fell out of favour. Greatly simplified overview of Qabalah for quick digestion. I’m partial to Jason Louv for really current/up to date and grounded information on these topics . His last book John Dee and the Empire of Angels was terrific.”

The Divine Punishment has been unleashed in full via Nuclear War Now! Productions